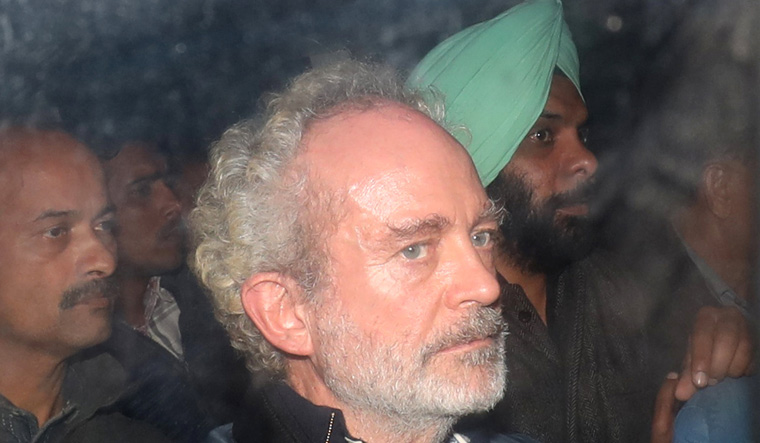 Christian Michel outside the court in Delhi | Reuters

India has rejected the UN body's submission and termed the claims biased, based on limited information and an inaccurate understanding of the country's criminal justice system. Officials in both the Enforcement Directorate (ED) and Central Bureau of Investigation (CBI), the twin investigating agencies in the case, say there is ample evidence against Michel—which is why he has not got bail so far. They have made written submissions to the government on the charges against Michel.

However, the issue is far from over yet and is expected to generate diplomatic heat in the coming days. The UN body will submit its report to the UN panel and New Delhi is prepared to counter the claims. THE WEEK spoke to Francois Zimeray, former French ambassador for human rights and former member of the European Parliament, who had approached the UN expert body on behalf of Christian Michel. Zimeray, who is working in association with Michel's counsel Aljo K. Joseph, said India must follow Mandela rules.

Why has the United Nations Working Group on Arbitrary Detention taken serious note of Christian Michel, who is an accused in the multi-crore VVIP chopper scam in India?

There is serious concern around Christian Michel’s arrest and detention. The UN experts body is a very respected body of legal experts, prominent lawyers and retired Supreme Court judges from around the world who have put in years of service in fighting severe violations of fundamental rights. They say that Michel’s case seems politically motivated and his trail procedure is not fair and violates the International covenant on political rights and the Universal Declaration of Human Rights. They say it violates the presumption of innocence as defined by the Mandela Rules.

The UN body is not political, it is a great tool for victims of violations of human rights to send a message to governments.

What are your expectations from the Indian government in this case?

I think India is a great country and it has to show the world that it accords importance to international standards on this issue. I am not saying whether Michel is guilty or innocent, but every person has a right to face trial in a dignified way. It is normal to prosecute corruption but one has to comply with the rules and do it in a fair way. This matter should not become a stone in the shoe in India’s relationship with the EU or UK.

What are the human rights concerns?

Michel is not a violent person. Then why isn't he being given bail? He has been having limited communication with his family for over two years. He should be allowed to organise his defence properly but even I cannot communicate with him.

Don't you think if Michel is an accused in the case, rule of law should take its course?

I am not saying he is guilty or not. I am only asking the government to reconsider its attitude and offer him a fair trial. Michel has been acquitted in Italy for the same facts. The UN experts body has mentioned that Michel's return was part of an exchange following the abduction of Princess Latifa, the daughter of the ruler of Dubai. States should not behave like that.