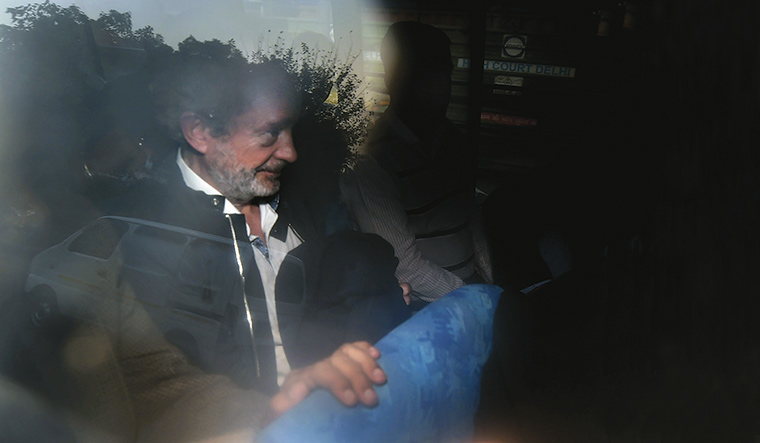 As the 10-man team led by CBI joint director A. Sai Manohar boarded the Gulfstream jet for Dubai, there was a sense of mission. Seldom had a plane from the R&AW’s covert air wing been used for such a task. They were going to bring home British national Christian Michel, an alleged middleman in the Rs3,600-crore AgustaWestland helicopter deal.

This was the climax of years of toil, which included travel to Milan and Dubai, and translation of reams of documents from Italian to English. This was going to be the Narendra Modi government’s biggest victory in its fight against corruption. It would also be a shot in the arm for the CBI, which is in the throes of a credibility crisis. Rakesh Asthana, the CBI special director who had formed a special investigation team for the case, is now warming the bench. He was relieved of his duties after a bitter battle with CBI director Alok Verma spilled into the public domain. Verma, too, was asked to go on leave.

On the day of the flight, however, Asthana forgot his personal battle and followed the developments from his Pandara Road home in Delhi. The special investigation team had been on the case since June 2016.

Sources said Asthana did not want the infighting to affect the agency’s working. On November 6, Asthana met National Security Adviser Ajit Doval at his pre-Diwali get-together for the security establishment. The event reflected the changing power equations against the backdrop of the feud in the intelligence and law enforcement agencies. Alok Verma was noticeably absent, but Asthana came with his wife. The pressing issue, Asthana felt, was the completion of the extradition of Christian Michel. In fact, he had just finished all the paperwork.

Operation Unicorn, as the mission was called, was also the need of the hour for the BJP. Government officials said that the word unicorn was chosen as it represented something unique, something that instantly stood out. For the BJP, Christian Michel was a unicorn. His extradition had the potential to embarrass the Congress (the deal happened during Manmohan Singh’s tenure) and would bring political gains ahead of the 2019 Lok Sabha elections. 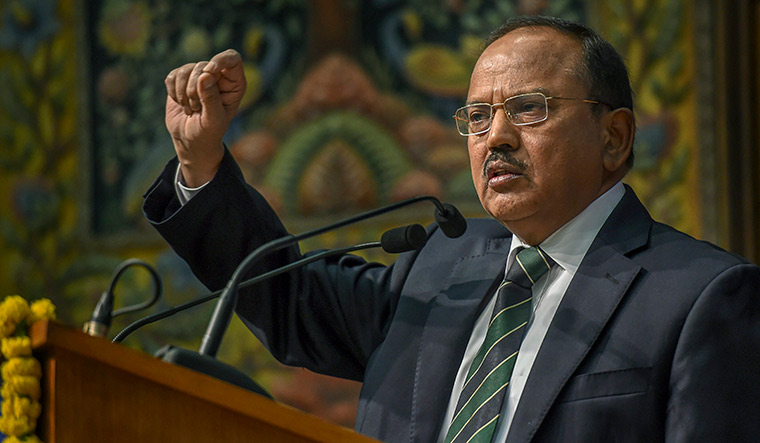 Christian Michel is accused of bribing top officials of the Indian Air Force and the government to swing the deal in favour of AgustaWestland, the British arm of Italian firm Finmeccanica (now Leonardo). But it does not end there. The investigation also found certain code names—’AP’, ‘family’, ‘family to be honoured in full’—which apparently alluded to certain leading politicians. CBI sources investigating the case said that while the first charge-sheet, filed in March 2017, focussed on the alleged wrongdoings of bureaucrats, the supplementary charge-sheet, to be filed soon, will focus on the alleged political beneficiaries in the case.

The BJP has already said that the extradition could spell trouble for the “first family” of the Congress. The political mudslinging intensified when, on December 5, news broke that Michel’s counsel in the Delhi court was Aljo Joseph, a Youth Congress leader.

“I am a practicing lawyer and advocate in Supreme Court, I have taken up Michel’s case in my professional capacity,” Joseph told THE WEEK. “I am yet to get the papers, so I cannot comment on the case right now.” A few hours later, as a reaction to the criticism, the Youth Congress sacked Joseph. The party seems to be distancing itself from anything to do with the deal. It also accused the government of conducting a smear campaign ahead of the elections. 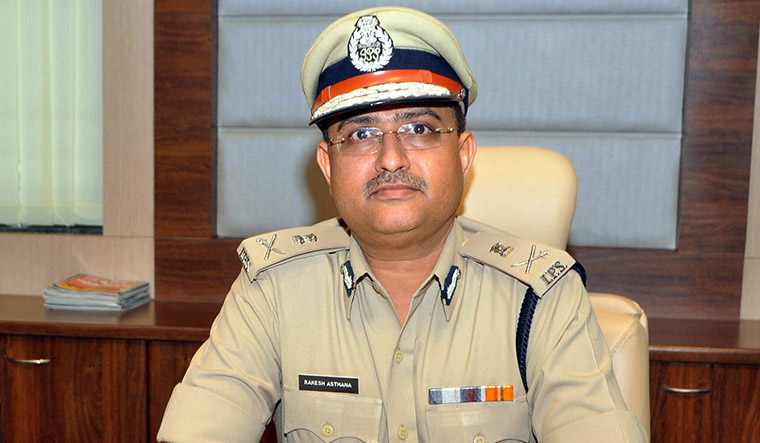 On December 5, when Michel was produced in the trial court, the CBI counsel told the judge that there was a clear flow of money from AgustaWestland into two different accounts, in addition to the recovery of handwritten notes of the accused, in which he was asking for the 5 per cent cut. The court granted Michel’s custody to the CBI for five days.

“The extradition is an important breakthrough,” CBI spokesperson Abhishek Dayal told THE WEEK. “It is crucial to examine Christian Michel to unravel the conspiracy and to bring out the full facts of the case.”

When Prime Minister Narendra Modi and Doval cleared Operation Unicorn, they sent out a message to the security and diplomatic bosses—everything had to be done with surgical precision. And, lo and behold. Doval, who is seen as more of a cop than a diplomat, surprised even his detractors by pulling off a diplomatic win. Foreign Minister Sushma Swaraj was already on an official visit to the UAE, and there could not have been a better time to announce the extradition of Michel, a diplomatic victory. Swaraj, who arrived in the UAE on December 3, personally thanked her counterpart Sheikh Abdullah bin Zayed Al Nahyan for taking India-UAE ties to the next level.

A healthy friendship between two states is rarely lopsided; it is usually one of reciprocity. And Doval knew this. That is why, before forming the 10-member Gulfstream team, he had won the friendship of his UAE counterparts by executing, again with precision, a joint operation to find the missing princess Sheikha Latifa. In March this year, she had fled Dubai to leave her “controlling” father, UAE Vice President Sheikh Mohammed bin Rashid Al Maktoum, and was on a yacht in the Indian Ocean when India was told about the situation. Quickly and efficiently, the Coast Guard, working on behalf of the UAE, intercepted her yacht. Though human rights NGOs accused India of flouting international treaties and maritime laws to “capture” the 32-year-old princess, Delhi helped send her back to her father.

THE MEN ON THE Gulfstream jet, too, were going to catch someone. When Manohar’s team—consisting of five crew members and four government officials—took its position on the jet, three seats were empty. When they returned on December 4, Michel and two UAE officials occupied the vacant seats. And, as the plane landed at the technical area of the Palam airport at 10.35pm, Doval briefed Modi about the success.

The Delhi Police, Intelligence Bureau, CBI officials and paramilitary forces were all on their toes as the team drove to the CBI headquarters. CBI interim director M. Nageshwar Rao was waiting inside. It was 1:38am. Incidentally, this was the second time in two months that Rao had stayed at headquarters past midnight. The first time was following his sudden appointment as director, when the Verma-Asthana feud boiled over. If that night was humiliating for the agency, this one marked a victory. Michel was taken to one of the four lockups on the ground floor of the headquarters. Mostly, investigating officers go to these lockups, and not every senior CBI officer has visited them. Rao seized the chance Asthana did not get.

When Michel arrived, he said he was suffering from anxiety. The CBI was ready. They had doctors waiting to examine Michel and they gave him medicines. Michel slept for two hours. Upon waking up, the SIT started questioning him. And, there were a lot of questions. The sleuths had all the evidence they had collected from the Milan police, which had first flagged the AgustaWestland deal in 2012. These include call records, case details, documents of companies and other documents relevant in India.

It was tough collecting these documents. Apparently, they had to ask the Italian police to translate some of them. For the others, they enlisted translators from Jamia Millia Islamia and Jawaharlal Nehru University, and also got help from some private translators whom the agency hires from time to time.

Asthana and his team had also travelled to Italy at least five times, and had formed a good working relationship with the police there. Though the CBI had started investigating the case in 2013, it picked up steam in 2016, when the SIT was formed. Doval had been closely monitoring every development since 2016. The CBI worked closely with the Indian counsel in Milan and used various diplomatic channels. It took a team of 50 CBI officials and staff, of various ranks, to finally make a strong legal case for extradition. A top officer involved in the investigation told THE WEEK that while there were eight key CBI officers who were on the job in the SIT, the constabulary assisted them in maintaining files, serving summons and getting translations.

The SIT also visited Dubai a few times before the extradition. “When Michel went to Dubai, he thought he could not be extradited from a third country,” said an investigator. “Given his business interests, he would have tried to expand his business there. But we were on his heels and the CBI team soon fanned out to Dubai as well.”

CBI sources said that the British high commission had not approached the agency yet, and that if they were to, they would do it via the foreign ministry. Currently, Michel is being tried under Indian law, but he will have consular access. 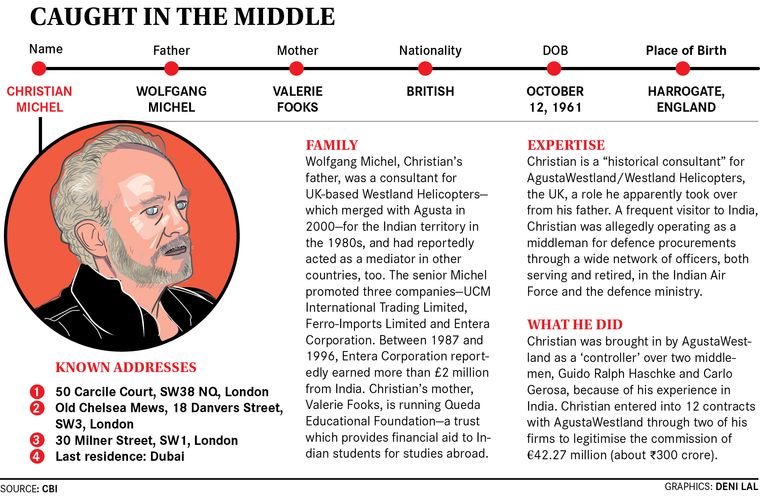