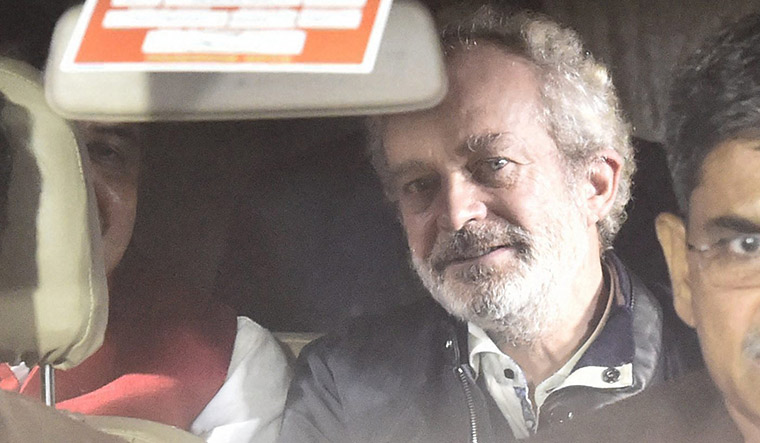 After a UK court ordered Nirav Modi's extradition to India, all eyes are now on British national Christian James Michel who is lodged in Tihar jail since December 2018. On Friday, the United Nations Working Group on Arbitrary Detention (UN WGAD) issued a statement urging the government to immediately release Christian Michel.

Michel is an accused in the Rs 3,700 crore VVIP chopper scam and has been in jail ever since he was brought on a special plane from Dubai after UAE authorities handed him over to the Indian government in December 2018. Michel has been alleging human rights violations and trying to secure his release and return to the UK.

He has also been pressing the British authorities to help him return to that country. It is learnt that he had recently shot off a detailed 35-page handwritten letter to Prime Minister Boris Johnson, foreign secretary Dominic Raab, and home Secretary Priti Patel, expressing his dismay at the failure of the British government in securing his release.

Incidentally, Nirav Modi's extradition order has landed at the desk of the UK home secretary Priti Patel who will take the final decision. At this juncture, whether Michel is able to draw attention to his condition and substantiate his claim to secure his release remains to be seen, but efforts have begun by his lawyers who approached the UN authorities.

The UN panel's latest intervention has given a boost to Michel who is hoping that he may be shown some linenacy this time.

On the other hand, the decision of the UK court to grant Nirav Modi's extradition is being seen as a victory for the Indian law enforcement agencies. The UK court on Thursday not only pronounced him guilty of money laundering, but also expressed satisfaction over the prison conditions in India, throwing out Modi's plea that he faces a threat of human rights violation in Indian jails.

In the wake of fresh developments between the two countries, Michel may have to wait and watch to see whether his claims of "illegal detention" and human rights violations has any takers. His lawyer Aljo K. Joseph said Nirav Modi's extradition order should not be treated as a political victory, but merely a judicial proceeding.

"If judicial decisions are projected as political victories by the ruling party, then the judiciary will be politicised. The media must refrain from projecting it like that."

He further said any attempt to link the UK court decision to the political system of that country is not in the true spirit of law. “The sanctity of the judicial processes need to be protected," he said.

The UN experts, meanwhile, said in their statement that "the United Arab Emirates unlawfully arrested and handed him over to the Indian government where he has been held arbitrarily since December 2018." Citing Michel's plea, the UN body said his detention is "politically motivated" and he has been living in appalling conditions, subjected to repeated and prolonged interrogations by the Indian agencies. This claim has been dismissed by both the CBI and Enforcement Directorate that are investigating the multi-crore scam.