Kerala HC had directed govt to raise the number of pilgrims per day to 5,000 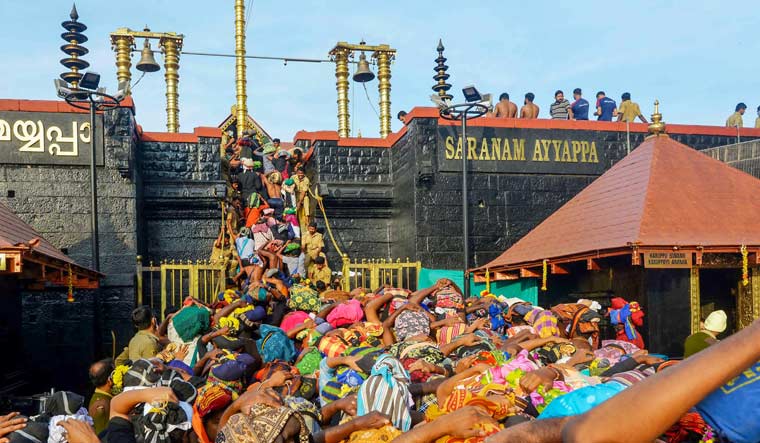 The state government, in its petition filed in the apex court against the December 18 judgement of the Kerala High Court, has said the state had constituted a high-level committee headed by the chief secretary, which had set the number of pilgrims per day to 2,000 on weekdays and 3,000 on weekends, respectively.

It said that to control the COVID-19 pandemic during the Sabarimala temple festival season between December 20 and January 14 next year, the state had constituted the high-level committee to consider all aspects and to fix the number of pilgrims, who can be permitted per day to visit the shrine.

It said the committee, in a meeting convened on December 14, considered the report submitted by the revised health advisory of the Health and Family Welfare Department and enhanced the number of pilgrims per day to 2,000 on weekdays and 3,000 on weekends.

The High Court disposed off the writ petitions filed by some of the respondents herein, with a direction to the government to increase the number of pilgrims per day to 5,000. The enhancement of pilgrims was done by the High Court without considering any proper report or other documents, the government said. The number of police officials, health officials and pilgrims affected by COVID-19 in the Sabarimala temple so far is on the higher side, the state government said in its petition, filed through advocate G. Prakash.

It said that entry to the temple is controlled by a virtual queue managed by police, and pilgrims are tested for COVID-19 before allowing them to enter the temple.

Increase in the number of pilgrims will put police personnel and officials of the health department in great strain and cause difficulty in controlling the pilgrim numbers of this magnitude, it said.

It is also pointed out a new COVID-19 strain was detected in the UK and considering its spread, Government of India cancelled all flights to and fro from there. “This being the situation, the Government of Kerala, seeks urgent interference of this court with the impugned judgment to control the spread of COVID-19 during the Sabarimala festival season,” it said.

As an interim relief, the plea has sought ex-parte stay of the High Court order, which was passed on a batch of petitions including those seeking directions to enhance the permissible number of pilgrims per day.

Earlier this year, the Supreme Court had constituted a nine-justice Constitution bench to deliberate upon issues pertaining to the scope of freedom of religion as also of judicial scrutiny into "essential religious practices" of separate "religious denominations".

These issues have arisen out of a judgment in the Sabarimala temple case.

The nine-justice bench has been set up after a five-justice bench, by a 3:2 majority verdict, had referred the matter to a larger bench while examining the review petition filed against the historic September 28, 2018, judgment, which had allowed women of all ages to enter the Sabarimala temple.