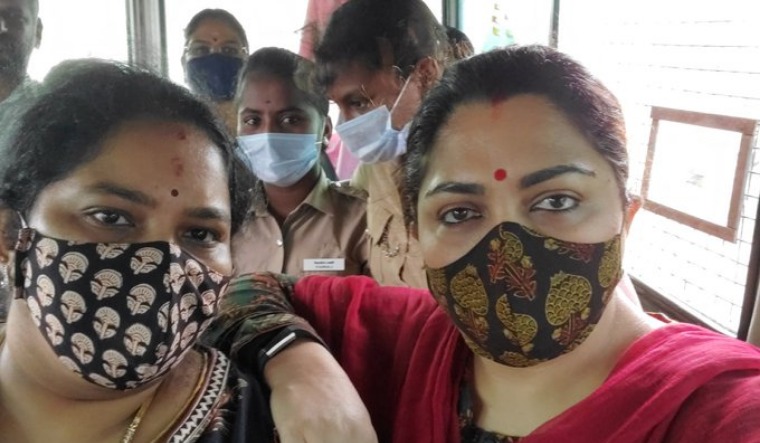 Actor-politician Khushbu Sundar on Tuesday was arrested by police at Muttukadu, on the outskirts of Chennai. She was on her way to Chidambaram to take part in a protest organised by the BJP against VCK chief and Lok Sabha MP Thol Thirumavalavan, alleging that he made "misogynistic statements against women”.

En route to Chidambaram, Thirumavalavan's constituency, Khushbu was stopped and taken into a police van to be detained. There was no police permission for the protest.

"Arrested… been taken in police van. we will fight till our last breath for the dignity of women. H'ble PM @narendramodi ji has always spoken about the safety of women and we walk on his path. We will never bow down to the atrocities of few elements out there. BHARAT MATA KI Jai," Khushbu tweeted as she got into the van.

BJP leader Khushbu Sundar had hit out at Thirumavalavan and said women cannot be objectified and accused the MP of "using religion" against them. She had also said that the women's wing of the party had organised a protest in Chidambaram demanding an apology. The protest was decided to be held on Tuesday.

Khushbu was detained near Muttukadu in ECR, by local SP Sundaravadhanam and team. Police had to detain her as she had violated prohibitory orders because Section 144 against unlawful assembly is in force in the State.

Khushbu also tweeted "Cowards VCK. Dont rejoice. Its your failure. Arrested bcoz they know we are a force to reckon with. We will not bow down. @BJP4India @narendramodi Ji shall take every step to ensure the respectability of every daughter of this soil.Darpoks VCK, respecting a woman is alien to you."