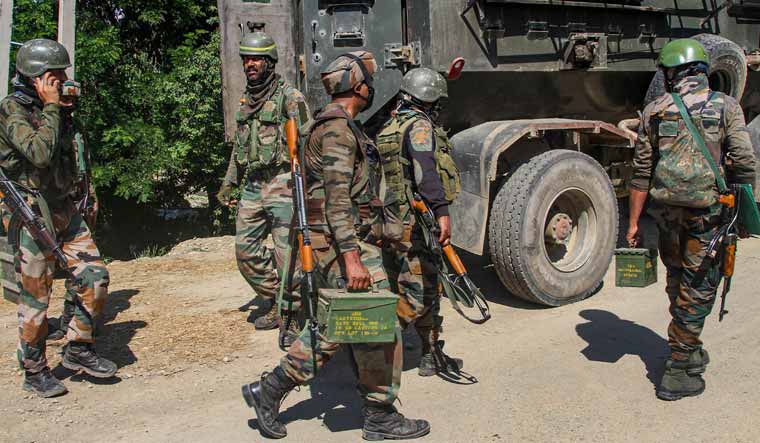 The DNA samples of the three Rajouri families have matched with the three men killed in Operation Amshipora carried out by the Army in Shopian on July 18.

Army’s 62 RR (Rashtriya Rifles) had said it had killed three Pakistani militants in an encounter at Amshipora in an encounter. The police in a statement said they have preserved the DNA of three “unidentified militants” killed in Amshipora.

“On a specific input by 62RR about the presence of terrorists in the Amshipora area of district Shopian, an operation was launched by them. During the search, terrorists fired upon Army personnel and the encounter started. Later on, police and CRPF also joined,’’ the statement said. “During the encounter, three unidentified terrorists were killed. Dead bodies of all the three terrorists were retrieved from the site of encounter. The identification and affiliation of the killed terrorists are being ascertained.”

The statement said incriminating materials, including arms and ammunition, were recovered from the site of encounter. It said the dead bodies of the killed terrorists have been sent to Baramulla for their last rites after conducting medico-legal formalities, including the collection of their DNA. “In case any family claims the killed terrorists to be their kith or kin, they can come forward for their identification and participation,’’ the statement said.

On August 10, three families from Rajouri informed the police that the three men—Imitiyaz Hussian, Muhammad Abrar and his namesake Abrar—killed at Amshipora resembled their missing sons who had travelled to Shopian from Rajouri in search of work on July 16. The three were cousins.

The families had filed a missing report about their sons with the police in Rajouri after not hearing from them for more than three weeks.

The police then started investigation into the incident and collected DNA samples of the families to match with those killed at Amshipora.

The Army also reacted to reports about the claims of the Rajouri families about the three men killed at Amshipora.

“We have noted social media inputs linked to the operation at Shopian on 18 July 2020. The three terrorists killed during the operation have not been identified and the bodies were buried based on established protocols. Army is investigating the matter,” said Srinagar-based defence spokesman Colonel Rajesh Kalia.

On September 18, the Army in a statement said the inquiry ordered into Operation Amshipora has been concluded and it has brought out certain prima facie evidence indicating that during the operation, powers vested under the Armed Forces Special Powers Act (AFSPA) 1990, were exceeded and the do’s and don’ts of Chief of Army Staff (COAS) as approved by the Hon'ble Supreme Court, have been contravened.

“Consequently, the competent disciplinary authority has directed to initiate disciplinary proceedings under the Army Act against those found prima-facie answerable,’’ the statement said.

The statement said the evidence collected by the inquiry has prima-facie indicated that the three unidentified ‘terrorists’ killed in Operation Amshipora were Imtiyaz Ahmed, Abrar Ahmed and Muhammad Ibrar, who hailed from Rajouri.

Talking to reporters in Srinagar during a briefing about the killing of two Lashkar-e-Taiba militants at Sirhama in Anantnag, IGP Kashmir Vijay Kumar said, “We have received the DNA sample results of three families of Rajouri and they have matched with those killed in Amshipora, Shopian. We will now take further action and complete the remaining formalities.”

The families of the three men had expressed doubts about the delay in announcing the results of the DNA matching. The families have demanded severe punishment for those involved in the fake encounter at Amshipora.

“Those involved in the killing of our children should be hanged,’’ said Muhammad Yousuf, father of Muhammad.

The families of the three youth have demanded their bodies for burial.

“We want the police to hand over the bodies of our children to us even if it is a limb for burial,’’ said Sifat Jan mother of Abrar.

The killing of the three youth in a fake encounter is the first such incident since Kashmir became a Union Territory, and is a setback to the Army, the administration run by Lieutenant Governor Manoj Sinha, as well as to the BJP government at the Centre.