Amar Singh: A friend in need, a friend indeed 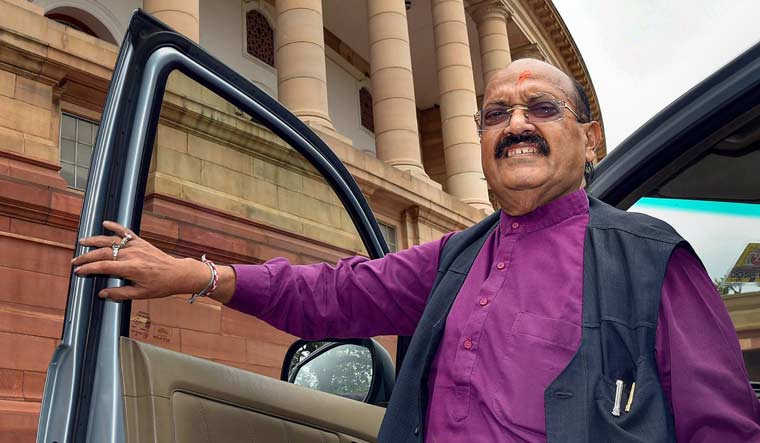 Amar Singh was a man who seemed to know everyone who mattered. The former Samajwadi Party leader, who passed away in Singapore today, had a great connect with his followers, too, which is evident from the fact that he remained in touch with them on social media even from his hospital bed.

His last two tweets, made today, were greetings on Eid Al Adha, and a tribute to freedom fighter Bal Gangadhar Tilak.

The 64-year-old had been under treatment in the Singapore hospital for the past six months for a kidney ailment that had bothered him for several years. He had two kidney transplants. He suffered a kidney failure in 2013, but recovered and returned to politics. In the 2014 Lok Sabha elections, Singh contested on Ajit Singh's Rashtriya Lok Dal ticket from Fatehpur Sikri and lost. Later, in a series of media interviews, Singh had praised Prime Minister Narendra Modi and the ruling BJP.

Born in Aligarh on January 27, 1956, Singh completed a bachelor's degree in law from the University College of Law, Kolkata. He started off as a young member of the Congress's 'Chhatra Parishad' in Kolkata, where his family ran business.

One of the high points of his political career was when he helped the UPA-1 government survive a no-confidence motion in the Lok Sabha in 2008 as the Samajwadi Party backed the Congress-led dispensation. After the Left parties withdrew support to the Manmohan Singh-led government over the Indo-US nuclear deal, he persuaded SP chief Mulayam Singh Yadav to forget his decade-long animosity towards the Congress, and support it.

He was first elected to the Rajya Sabha in 1996, then in 2003, 2010 and 2016. He was a member of important committees such as the one of finance (1998), select committee on prevention of money laundering bill (1999-2000), committee of privileges (2004) and also chaired the parliamentary standing committee on health and family welfare (2009). He also served as director to Indian Airlines, State Bank of India and National Textiles Corporation.

His political affiliation shifted from the Congress where he was member of the All India Congress Committee, to the Samajwadi Party where he served as the all India general secretary till he was shown the door by the party in 2010. A true political maverick, Singh introduced a private members bill against a foreigner becoming India’s prime minister (aimed at Sonia Gandhi) but built bridges with the party, even declaring once that a secular government in the country would not be possible without the Congress.

To Singh’s credit went the introduction of Samajwadi Party chief Mulayam Singh Yadav to Bollywood and big business. It was Singh who started the tradition of bringing film stars to Saifai (Yadav’s ancestral village) Mahotsav to be part of its yearly winter celebrations. Many senior party members abhorred this tinging of Yadav’s ‘son of the soil’ image with stardust.

Within the SP, it was, however, Azam Khan who locked horns with Singh as the latter hoisted his protégé, former actor Jaya Prada, on the Rampur Lok Sabha seat. Khan supported Prada under party pressure but never lost any opportunity to display his irritation.

Singh’s other most prominent bond was with Amitabh Bachchan, who he considered his elder brother. Singh is credited with steadying Bachchan’s career in 1997 and saving his company—then called Amitabh Bachchan Corporation Limited. Such was the Bachchan’s family proximity to Singh that his was probably the most photographed face, besides the family, during the nuptials of Abhishek Bachchan and Aishwarya Rai.

It is believed he convinced Jaya Bachchan to represent the Samajwadi Party in Rajya Sabha.

Though the families had a bitter fallout, in February this year, Singh had apologised to Amitabh Bachchan for "overreaction" against the superstar.

In a tweet, Singh had said, "Today is my father's death anniversary and I got a message for the same from SrBachchan ji. At this stage of life when I am fighting a battle of life and death I regret for my overreaction against Amitji and family. God bless them all."

Industrialist Anil Ambani was another close friend of Singh and it is believed that only those ‘blessed’ by Singh would get contracts with the business group.

In 2006, a series of voice recordings of Singh with industrialists, bureaucrats, Bollywood stars was sent to the media. Dubbed as ‘Amar Singh ki Amar Kahani’ (The Unending story of Amar Singh) these conversations included talk of managing business deals, deciding commissions, transferring judges and some decidedly salacious talk with Bollywood actresses. Following this revelation, Singh’s close friends distanced themselves from him.

In 2011, when Singh was arrested in connection with a cash-for-votes scam and was lodged in Tihar Jail, his influential friends stayed away.

His friendship with tinsel town, however, survived and, in February 2018, he was seen by Boney Kapoor's side as they went to receive the mortal remains of Sridevi.