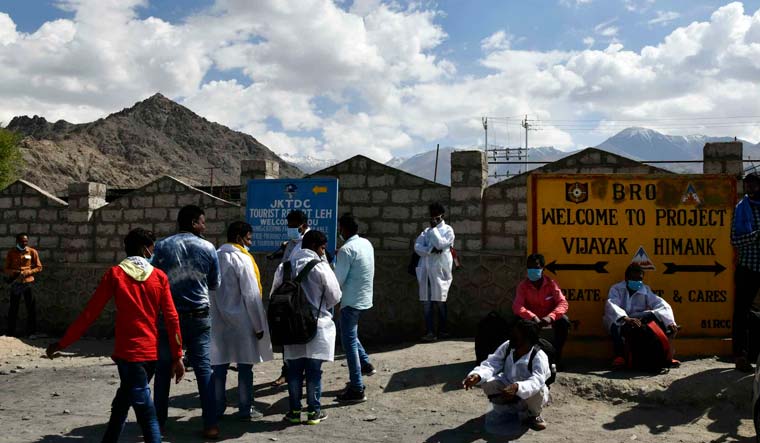 Amidst border tensions with China, Defence Minister Rajanth Singh has given a three-month deadline to the Border Roads Organisation (BRO) to complete the strategic Darbuk-Shyok-Daulat Beg Oldi (DSDBO) road in the eastern Ladakh sector. China had raised serious objections to this road, which gives India easy access to the Karakoram Pass that divides Ladakh from China's Xinjiang Province.

Though on Monday both sides initiated steps towards disengaging at Galwan valley and at Gogra and Hot Springs, the Indian Army is simultaneous building up its capacity in the sector as well. The Army is adopting utmost caution as they believe that the Chinese military cannot be trusted, at least until they completely pull back from the face-off locations.

Road construction has often triggered face-offs between the Indian Army and the Chinese People's Liberation Army (PLA), and was a factor behind the ongoing tensions in the eastern Ladakh sector. The latest troop build-up by Indian Army and PLA at multiple locations on Galwan valley was also due to Chinese objection to the DSDBO road, which provides access to Depsang plain, Galwan valley and Karakoram pass. The road lies opposite to the Aksai Chin plateau, which is under the occupation of China.

According to a senior defence ministry official who was part of the meeting, BRO has been asked to complete the stretch by October 2020. "On the 255 km Darbuk-Shyok-Daulat Beg Oldi road, the ongoing construction is almost done. About 45 km of blacktopping work is pending. BRO head Lt Gen Harpal Singh conveyed that this has to be completed by October 2020,” the official said.

As first reported by THE WEEK, to speed up the infrastructure on the border with China, nearly 100 labourers from the Jharkhand were landed at Ladakh to finish the critical Darbuk-Shyok-Daulat Beg Oldie road project. Their target is to finish the project before winter sets in the snow deserts of Ladakh in November.

All these labourers, after mandatory acclimatisation at Leh, were moved to forward areas to join the project.

After having adequate man force for the project at the worksite, the head of BRO Lt. Gen Harpal assured Defence Minister that his organisation (BRO) would leave no stone unturned to complete the ongoing projects on the LAC and LoC on time. He also said that his organisation is working in close coordination with all ministries including the defence, home affairs and union transport ministries.

Early in June, BRO had decided to recruit over 11,800 workers from Jharkhand for critical projects. But the Jharkhand government, fearing for the workers' safety after the June 15 clash, initially refused to send all of them. Only 1,600 labourers could be sent in the first train, which was flagged off by the Chief Minister of Jharkhand Hemant Soren on June 13 from Dumka to Udhampur. Annoyed with the state government's attitude, the BRO headquarters in Delhi withdrew its recruitment drive by calling back its recruitment team of five BRO projects from Jharkhand.

Keeping the urgency of the matter in mind, BRO was left with no option and had to fly these labourers from Delhi to Leh. These labourers from the Dumka and Jamtara districts of Santhal paragana division of Jharkhand first travelled to Delhi via Kolkata by train.

Official sources claimed that an alternate route is also being made here and full focus is on to provide road connectivity to the armed forces as its top priority.

BRO is constructing 61 strategic Indo-China Border Roads (ICBRs) measuring 3323.57 Km in length under the direction of the China Study Group (CSG). A Parliamentary Standing Committee on Defence in March informed that 75 per cent of the construction work on the 61 Indo-China Border Roads has been completed. Of these 12 roads, about 1,064 km are in the Union Territories of Jammu and Kashmir and Ladakh, while three roads measuring about 62 km are in Sikkim.