Some of the workers from Jharkhand on the Delhi-Leh flight, travelling to work on the DBO road near the border with China | Sanjay Ahlawat/Leh

For many of the labourers from Jharkhand flown in to assist the development of critical border road infrastructure near the border with China in Ladakh, the flight from Delhi to Leh was the first time they had been airborne.

"Since the Jharkhand state government has denied permission for special trains to ferry labourers to forward locations, the Border Roads Organisation (BRO) has made arrangement to take us by air from Delhi," says 35-year old labourer Ramesh Modi from Dumka, who flew for the first time, in an Air India flight to Leh on Saturday morning. Not only Ramesh, but all of his fellow workers were thrilled as well as nervous for their first air journey.

To speed up the development of infrastructure along the border with China, nearly 100 labourers from Jharkhand have landed in Leh, Ladakh to finish the critical Darbuk-Shyok-Daulat Beg Oldie (DS-DBO) road project. 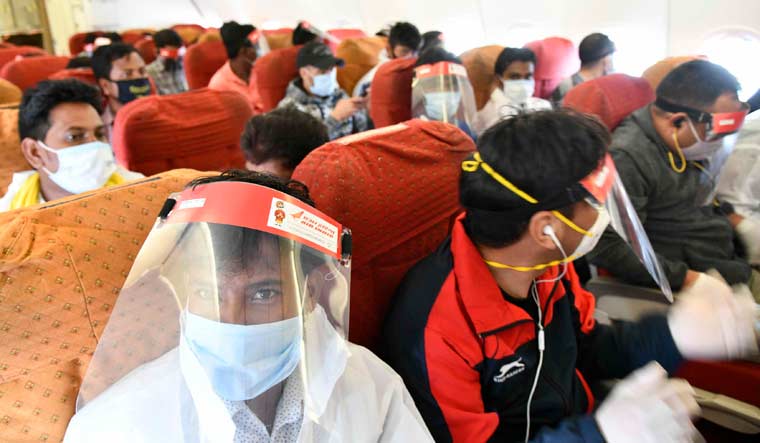 Despite Chinese objections to the road, which provides access to Depsang plain, Galwan valley and the Karakoram pass, India has made it clear that infrastructure build-up will continue along the border regions, including in Ladakh, Uttarakhand, Sikkim and Arunachal Pradesh.

Further, satellite images have indicated that instead of cutting down on the number of troops following military talks that took place after the June 15 clash in the Galwan valley, the PLA has further strengthened its deployment on the flashpoints by setting up permanent bunkers, pillboxes and observation posts, as well as by aggressively building roads and other infrastructure at multiple locations.

Building roads leading to the disputed Line of Actual Control, considered among the world's longest disputed or unresolved borders, has been a fraught exercise for the government. 73 India-China border roads on the Himalayan frontier were conceptualised in the late 1990s by a consultative group called the China Studies Group; the roads were subsequently cleared at the highest level of the Cabinet Committee on Security and given the go-ahead for construction in 1999.

According to a BRO official, with the construction of the 255 km-long DS-DBO road, the movement of security forces from Leh to Daulat Beg Oldie will be much faster. The BRO wants to finish the project before winter sets in the snow deserts of Ladakh in November.

Early in June, the BRO decided to recruit over 11,800 workers from Jharkhand for critical projects. But, the Jharkhand government, after the June 15 Galwan Valley clash, refused to send its workers, fearing for their safety. Only 1,600 labourers could be sent in the first train, which was flagged off by Jharkhand Chief Minister Hemant Soren on June 13 from Dumka to Udhampur. Annoyed with the state government's attitude, the BRO headquarters in Delhi withdrew its recruitment drive by calling back its recruitment team of five BRO projects from Jharkhand.

But, considering the urgency of the matter, the BRO was left with no option and had to fly these labourers from Delhi to Leh. The labourers from Dumka and Jamtara districts of Santhal Pargana division in Jharkhand first travelled by train to Delhi via Kolkata, before boarding their Air India flight to Leh.

From Leh, the labourers were sent to the forward areas to join the construction work, which was affected due to the nationwide lockdown over COVID-19. Several special trains were planned to bring back labourers from states like Jharkhand, Bihar and Odisha to restart the construction activities in the remote border areas.

It is notable that the road construction by India has always triggered the face-offs between Indian Army and the Chinese People's Liberation Army (PLA). The latest troop build-up by Indian Army and PLA at multiple locations on Galwan valley was also due to Chinese objection to the DBO Road. The road is located near the Aksai Chin plateau, which is under Chinese control.

28-year old Bikram Jha, who has experience for working on BRO projects earlier, claimed that he wanted to serve the country in this time of crisis.

"When BRO official asked us to join the work, we immediately accepted the offer because these roads are important for country's security, especially during tension with China," Bikram told The WEEK during his flight to Leh. All these labourers were brought to complete the work on the 255 km-long strategic Darbuk-Shyok-Daulat Beg Oldie (DS-DBO) road including eight bridges. The BRO is expected to finish blacktopping at some of the stretches by the end of this year.