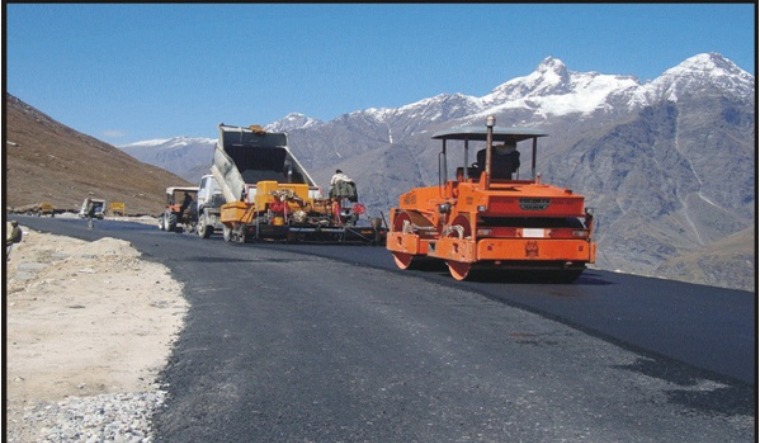 As the militaries of India and China make efforts to disengage from the standoff points to defuse the tension prevailing for nearly two months on the border in eastern Ladakh, over 1,600 workers are on their way to Leh to rejoin the construction projects of Border Roads Organisation in Ladakh. Commanders of Indian Army and Chinese PLA are doing multiple meetings to keep the situation under control on the disputed border. Even on Monday, a meeting between brigade commanders happened close to the patrolling point in Galwan valley.

A special train with workers from Jharkhand reached Udhampur in Jammu on Monday morning, who will go further to Leh and other areas in Ladakh, according to a senior government official.

It is notable that the road construction by India has always triggered the face-offs between Indian Army and the Chinese People's Liberation Army (PLA), including the recent ones. The latest troop build-up by Indian Army and PLA at multiple locations on Galwan valley was also due to Chinese objection to Darbuk-Shyok-Daulat Beg Oldi (DBO) Road in Ladakh, which provides access to Depsang plain, Galwan valley and Karakoram pass. This strategic road was completed by the Border Roads Organisation (BRO) exactly a year ago. The road is opposite to the Aksai Chin plateau, which is under the occupation of China. Galwan river, which is a 1962 flashpoint that saw Chinese aggression, has once again become a flashpoint between the two sides.

Despite objection from China, India has already made it clear that infrastructure build-up along border, including Ladakh, Uttarakhand, Sikkim and Arunachal Pradesh, will continue.

Construction activities of the BRO were affected due to nationwide lockdown because of COVID-19 pandemic. Several special trains have been planned to bring back labourers from states like Jharkhand, Bihar and Odisha to restart the construction activities on the remote areas of border. Earlier this month, the Jharkhand state government expressed its displeasure over payment and other welfare facilities provided to migrant labourers by BRO. In response, BRO headquarters responded to the Jharkhand government by detailing all perks and other medical facilities to migrant labourers. After intervention by the Central and state governments to provide employment opportunities to migrant labourers, officials of BRO signed an agreement with the state government finishing the role of middlemen in the registration process.

Five more such trains carrying migrant labourers from districts of Pakur, Sahibganj, Dumka and Godda will leave from Dumka this month after the mandatory registration of labourers is completed at their respective districts. BRO will recruit over 11,800 workers from Jharkhand for critical projects.

Building roads leading to the disputed Line of Actual Control, considered as the world's largest disputed or unresolved border, has been a fraught exercise for the government. India-China border roads on Himalayan frontier were conceptualised in the late 1990s by a consultative group called the China Studies Group, subsequently cleared at the highest level of the Cabinet Committee on Security and given the go-ahead for construction in 1999.

Till then, Indian forces were following an old military belief that if roads were metalled, they would provide easier mobility to the enemy (Chinese) in the event of hostilities.

Eventually in 2012, the government identified 73 roads of 3,812 km length for construction along India-China border.

While asking for higher budgetary allocation for the Border Roads Organisation, an arm of the ministry of defence, a parliamentary panel in March 2019 flagged the ICBRs (India-China border roads) as a crucial element in “effective border management, security and development of infrastructure in inaccessible areas adjoining the China Border”.

BRO is constructing 61 India-China Border Roads with total length of 3,346 km (across the Himalayan frontier) along the country’s northern border with China, spread across Arunachal Pradesh, Jammu and Kashmir, Sikkim, Uttarakhand and Himachal Pradesh.

The Cabinet Committee on Security last year had also cleared the construction of 44 more “strategically important roads” along the India-China border with cost of around Rs 21,040 crore.

The Standing Committee on Defence, in its 2017-2018 report, noted that “the country, being surrounded by some difficult neighbours, with a view to keeping pace, construction of roads and development of adequate infrastructure along the borders is a vital necessity”.

When the CAG, in 2016, pointed to cost escalation, as BRO had spent 98 per cent of allocated budget for 61 India-China border roads for completing only 22 roads, the ministry of defence made a submission that main reason for cost escalation was time overrun, which occurred due to delay in forest wildlife clearances, restricted working season, inadequate air logistics support, terrain and technical constraints, extreme remoteness of the area, resulting non-availability of skilled labour and inadequate availability of construction material. It also blamed survey technology used at the time of planning these ICBRs in 1997-99, as accuracy was not up to the mark and it led to inferior estimation compared with modern-day survey techniques.