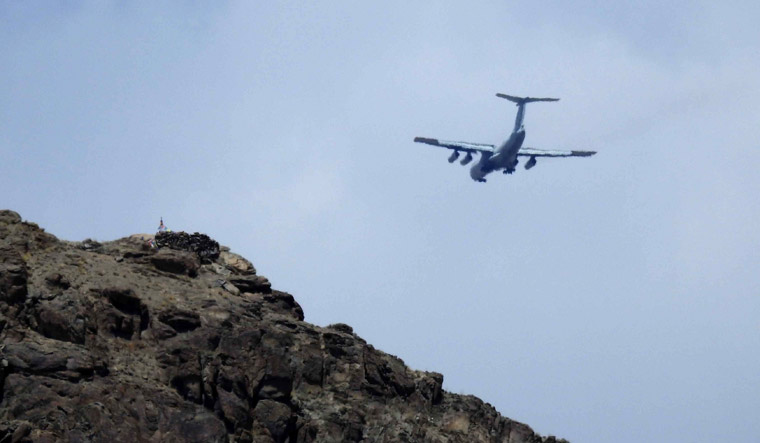 In the backdrop of the Special-Representative level talks between National Security Advisor Ajit Doval and Chinese Foreign Minister Wang Yi, who had a telephonic conversation on Sunday, Chinese and Indian troops have pulled back from three friction points, including the site of the June 15 clashes at Galwan Valley in eastern Ladakh. The extent of the mutual withdrawal has not been specified by the military establishment, but the Army is maintaining its highest level of cautiousness.

However, the Indian Army says the Chinese military cannot be trusted and calls these just "baby steps" in the disengagement process, adding that it remains to be seen whether this is a lasting and genuine disengagement move towards maintaining the status quo ante. Moreover, the Army will carry out a physical verification process in the next 72 hours to ensure Chinese claims of withdrawal with utmost caution—because the June 15 clash in Galwan Valley occurred during the similar exercise (physical verification). Local area commanders have been asked to remain extra vigilant while sending teams for physical verification and patrol parties must be supported with adequate backup support.

The disengagement is taking place at friction points at Patrol Point-14, 15 and 17, which include Galwan Valley and Gogra Hot Springs. According to official sources, a three-km buffer zone has been created at Patrol Point-14 in Galwan Valley, where 20 Indian soldiers and an undisclosed number of Chinese troops died in a clash on June 15.

It is also learnt that a marginal reduction of the troop level by the Chinese side has also happened at Pangang Tso, which was considered to be the most complex issue. It is learnt that the Chinese have dismantled some tents from the ridgelines close to Finger-4 area. Sources claim that the complete disengagement at the Finger 4-Finger 8 area will take time.

Serene Pangong Tso, (‘Tso’ means lake in the local Tibetan language), is divided into eight fingers: The slopes of the barren mountains that jut forward into the lake are referred to as fingers in military parlance.

Traditionally, India claims that its territory goes until the easternmost finger, that is number 8. But, gradually, both sides have agreed to an understanding that while India has control between fingers 1 and 4, the Chinese military will consider 5-8. But, both sides only used to patrol in these areas. While India has its last overlooking observation post close to Finger 3, Chinese has it on Finger 8. But, when the entire focus was on Galwan valley, the Chinese military built permanent structures along with metalled roads up to the areas between Finger 4-8, including a helipad as well.

"Chinese are determined to change the status quo in Pangong Tso area. Intelligence inputs based on satellite images [show that the] Chinese PLA have captured the entire ridge area of finger 4, that is close to five kilometres inside Indian territory" a source said.

Meanwhile, the Chinese foreign ministry has also confirmed progress was made towards military disengagement in eastern Ladakh.

"Disengagement with Chinese People's Liberation Army (PLA) has started as per agreed terms in the Corps Commander's meeting on June 30. PLA [were] also seen removing tents and structures at Patrol Point 14," said an official source, adding that the rearward movement of PLA vehicles was seen at "General area, Galwan, Hot Spring and Gogra".

Sources in the military in Ladakh claimed that verification of pullback is being done by Unmanned Aerial Vehicles (UAVs) on both sides but physical verification is yet to happen.

At the June 30  Lt Commander-level meeting, China had agreed to pull back its forces from Galwan and Gogra-Hot Spring areas as part of a step-by-step disengagement plan. The Indian side added the clause of physical verification because of their lack of trust in the Chinese military.

The Indian military establishment feels it is the PLA that has moved forward by strengthening its deployment on the flashpoints by setting up permanent bunkers, pillboxes and observation posts, besides in-depth deployment of artillery and armoured units.

"Indian forces only did the mirror deployment to prevent Chinese from making inroads into Indian territory. Chinese has to move back first if they want peace in the region," said an official, adding that the Chinese side cannot be trusted, especially after the June 15 clash.

The increased water flow of the Galwan and Shoyak rivers, believed to have damaged newly-built Chinese infrastructure, apparently played a major role in forcing PLA to move back. The physical verification will be done at the pullback sites after the water-level in the Galwan river subsides. Moreover, local commanders from both sides are constantly communicating with each other through hotlines placed at the Chushul and Moldo Border Personnel Points.

Though the disengagement process has moved a bit, the Indian military is enhancing its capabilities on the Ladakh sector of the Line of Actual Control, the de facto border with China. Additional numbers of frontline fighter jets and attack helicopters of the Indian Air Force on its airbase in Leh can be seen. While transport aircraft like C-17 Globemasters are performing several sorties from Chandigarh to Leh, bringing additional troops and military platforms, Sukhoi-30MKI and MiG-29 fighters jets are regularly carrying out combat air patrols in the areas close to the border, along with the Apache attack helicopters that India recently purchased from the US.