Year of accomplishments and challenges: BJP chief on 1st year of Modi 2.0

There is a cultural change in the political arena: J.P. Nadda 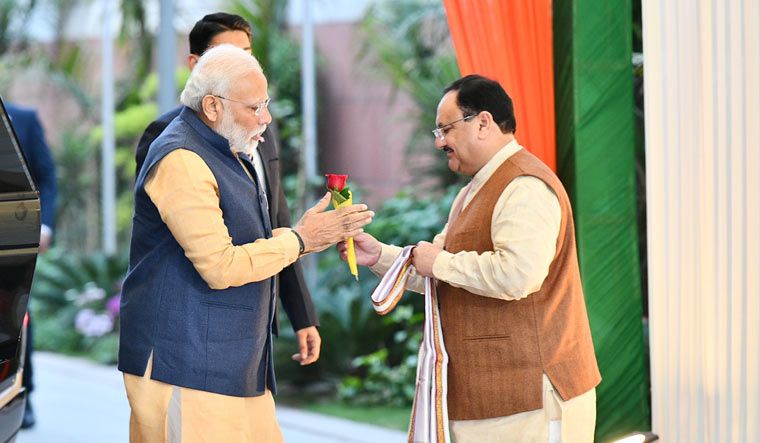 [File] Prime Minister Narendra Modi is greeted by BJP president J.P. Nadda as he arrives at the BJP office for the CEC meeting | Sanjay Ahlawat

As the Modi government enters into its second year, it is faced with the twin challenges of containing the Covid-19 pandemic and an economic slowdown. The BJP is gearing up to spread the government's message through virtual means by organising conferences and meetings across the country.

Nadda's press conference and later, a Facebook live session addressing his party workers, was first in the series to take the government's political message forward, and engage with people who were feeling uneased by the extended lockdown.

The BJP president said the impact of Covid on public life was huge, and it is set to change the way political parties engage with the people. As the Modi government was marking its first year in power, it was reminding the people of the work done by it, lest it be forgotten in the Covid's shadow.

“What is right, is right. If it is right, it will be implemented. There is no longer a chalta hai attitude. Things are no longer held up or brushed aside. Modi has taken bold actions,”  Nadda said about the government's intent in the last six years of power.

There is a cultural change in the political arena, he added. “It has been a year of accomplishments, and challenges. He (Modi) worked on infrastructure and reforms during his first tenure. In his second tenure, he took bold decisions, be it for social justice, economic justice and to strengthen the country. Modi led from the front.  In his years, India has become self-reliant,” the BJP chief said.

He also spoke about the country's self reliance in upgrading health infrastructure in just three months of Covid.

Reacting to criticism that Covid has led to political fights, Nadda said, “We have not politicised the Covid fight. But, at the same time, the Congress has been irresponsible. It led to allegations and counter allegations."

He attacked Rahul Gandhi for questioning the government. “Rahul Gandhi has a low understanding of these issues. He kept changing his stance on lockdowns. Once he said it was early, then he said it was late, and then it should be lifted.  His statements are towards a political end and not to end the corona crisis."