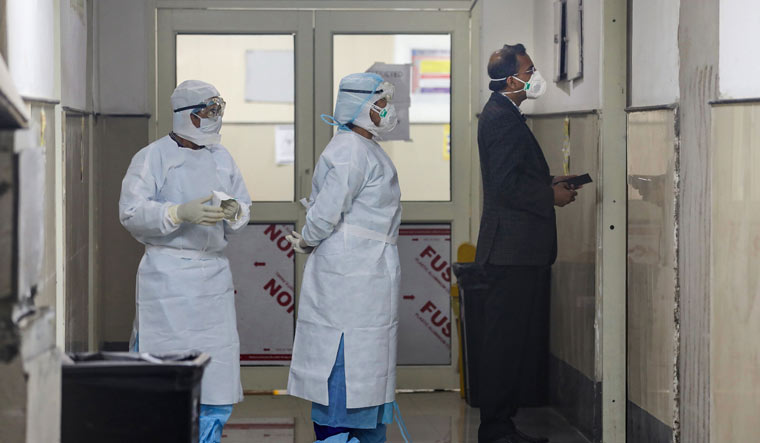 After India reported its first casualty from coronavirus on Thursday, an elderly man from Kalaburagi in Karnataka, the authorities taking emergency measures to contain its spread like shutting down schools, colleges and cinema halls in the national capital and some other places. The number of infections in India soared to 74. The Union health ministry confirmed that a 76-year-old man from Kalaburagi in Karnataka, who died on Tuesday, was infected with coronavirus.

Samples of the man, who had recently returned from Saudi Arabia,  "has been confirmed for #COVID19", Karnataka Health Minister B. Sriramulu said. "The necessary contact tracing, isolation and other measures as per protocol are being carried out," he tweeted.

Meanwhile, the Delhi government declared coronavirus an epidemic and shut all cinema halls, schools and colleges, except those where exams are on, till March 31. The government also made it compulsory to disinfect all public places, including government and private offices and shopping malls, every day in the national capital. The decision was taken at a high-level meeting attended by Delhi Chief Minister Arvind Kejriwal, LG Anil Baijal and top government officials.

Talking to reporters after the meeting, the chief minister said his government was making arrangements for quarantine facilities at vacant flats owned by Delhi Urban Shelter Improvement Board (DUSIB) and under-construction hospitals. "All cinema halls will remain shut till March 31. Also, all schools and colleges, except those where exams are being held, will remain shut till March 31 due to coronavirus. The government has declared coronavirus an epidemic," he said.

Fourteen fresh cases have been reported from several states, including nine from Maharashtra, the Union health ministry said on Thursday. As the Centre and the states ramped up their efforts to tackle the novel coronavirus, which has claimed at least 4,600 lives globally and affected nearly 1,25,293, Prime Minister Narendra Modi asked the countrymen not to panic and asserted that the government was fully vigilant.   Apart from directing the Union ministers not to travel abroad in the upcoming days, Modi also urged people to avoid non-essential travel, saying,"we can break the chain of spread and ensure safety of all by avoiding large gatherings."

Asking people not to panic, the Union health ministry said no community transmission of the virus has been observed and there has only been cases of local transmission so far.

The total number of 74 patients in India includes 16 Italians and one Canadian. The figure is inclusive of three patients from Kerala who were discharged last month following recovery.

For a state-wise breakup, Delhi reported six positive cases and Uttar Pradesh 10. Karnataka has four cases, Maharashtra 11 and Ladakh three. Rajasthan, Telangana, Tamil Nadu, Jammu and Kashmir, Andhra Pradesh and Punjab have reported one case each. Kerala has recorded 17 cases, including three patients who were discharged last month. Lav Aggarwal, the Joint Secretary in the ministry, said 1,500 people who came in contact with these 74 infected people were under rigorous observation while over 30,000 people across the country were under community surveillance.

The government has stepped up vigil and following a strong contact tracing system to ensure anyone who has come in touch with the infected are not missed out, they said, adding till now, 11,14,025 people have been screened at 30 designated airports in India.

As the contagious disease with flu-like symptoms spread across the globe, the cabinet secretary on Wednesday said states and Union Territories should invoke provisions of section 2 of the Epidemic Diseases Act, 1897, so that all advisories issued by the Union health ministry and state governments are enforceable.

India has suspended all visas, except for a few categories such as diplomatic and employment, till April 15 in a bid to contain the spread of respiratory virus, according to a revised travel advisory. Visa-free travel facility granted to Overseas Citizenship of India (OCI) card holders is also kept in abeyance till April 15, according to the advisory issued on Wednesday.

Any foreign national who intends to travel to India for compelling reason may contact the nearest Indian Mission and that all incoming travellers, including Indian nationals, arriving from or having visited China, Italy, Iran, Republic of Korea, France, Spain and Germany after February 15 will be quarantined for a minimum 14 days.