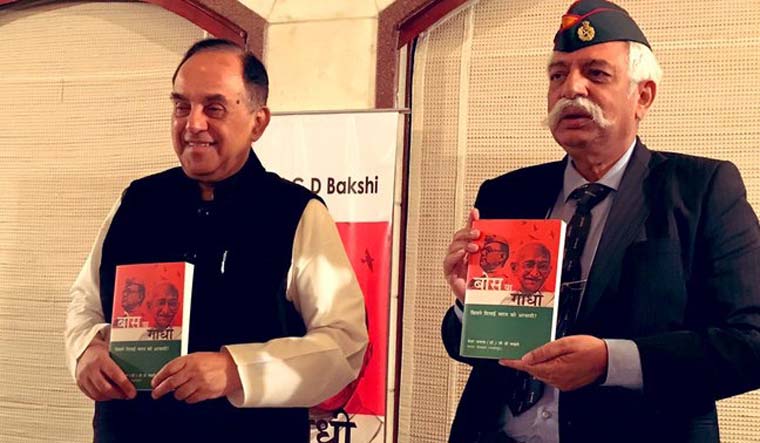 Retired major general Gagandeep Bakshi has been a familiar face on TV news debates in Hindi and English for several years now. Bakshi has become famous for his willingness to lash out at those not toeing a nationalist line. But in addition to his image of being a vocal TV news personality, Bakshi is also a writer.

Bakshi, in fact, prides himself as a 'Netaji scholar', having claimed to have done extensive research on Subhas Chandra Bose, popularly known as Netaji.

On Thursday, Bakshi released a book titled Bose ya Gandhi: Hamen Azadi kisne dilai?. The book was formally unveiled by BJP MP Subramanian Swamy in Delhi. The book appears to be the Hindi translation of Bose or Gandhi: Who Got India Her Freedom?, which Bakshi wrote in January 2019.

In a Facebook post on Thursday, Bakshi wrote he had brought out the book "after detailed research in The transfer of Power Archives". Bakshi declared his research showed the "British perspective" on the Indian freedom struggle.

Bakshi wrote on Facebook, "They (British) were not in the least bothered by the Non-violent movement of the Congress. indeed in 1942 Quit India movement had been decisively crushed with ease. The INA trials and Naval mutiny generated such serious alarm that contingency plans for evacuation of all British nationals and soldiers from India were drawn up by Commander in chief Fd Mshl Auchinleck. Wavell (Viceroy) clearly told London they had just 18 moths (sic) to get out of india before they lost the power to shape events."

Claude Auchinleck was the commander in chief of the British Indian Army, who was forced to commute the sentences of three convicts in the famous Indian National Army trial at Red Fort in 1945-46. The Indian National Army was the armed force led by Bose that had sought to liberate India from British rule with the help of the Axis Powers in the Second World War. Archibald Wavell was the viceroy of British India from 1943 to 1947.

Bakshi has been an outspoken advocate of the INA and its role in forcing the UK to grant freedom to India. In January 2019, Bakshi told Republic World, "It was the INA which was really responsible for forcing the British to leave. They had completely shaken the loyalty of the Indian soldier to the Raj."

In 2016, Bakshi wrote a book on Subhas Chandra Bose titled Bose: An Indian Samurai: Netaji and the INA: a Military Assessment. The book has been described as a professional attempt to evaluate the military performance of the INA and its impact on the freedom struggle. In the summary of the book, Bakshi argues, "A succession of court historians have tried to craft a narrative that India had obtained her freedom entirely by the soft power of Ahimsa/non-violence and Satyagraha; and that hard power had no role to play whatsoever."

Not surprisingly, Bakshi has been critical of Mahatma Gandhi.