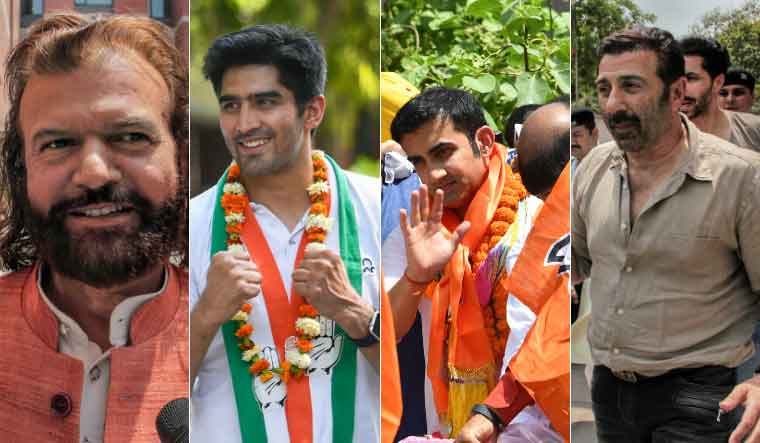 With the likes of Hans Raj Hans, Sunny Deol, Gautam Gambhir and Vijender Singh in the fray, the Lok Sabha election campaign is becoming nothing short of a celebrity show in Delhi and Punjab. In the capital, entry of sportspersons, including cricketer Gambhir as BJP's candidate from East Delhi and boxer Vijender for the Congress in South Delhi, has made it tougher for their opponents to counter them because of their star appeal.

Similarly, the BJP brought in Punjabi-Sufi singer Hans Raj Hans from the reserved North-West Delhi seat, denying the ticket to sitting MP Udit Raj, a dalit leader who had joined the saffron party before the last Lok Sabha elections. The decision to field Hans Raj came even as Udit Raj threatened to file his nomination as an independent on Tuesday (April 23), the last day for filing nominations. The BJP is banking on Hans Raj's popular appeal among the Punjabi and Sikh voters in the area to do the trick. He will face Congress's Rajesh Lilothia, a former MLA, and AAP's Gugan Singh Ranga. Delhi will go to polls on May 12.

Both the Congress and the BJP waited until the last minute to introduce surprise candidates to put up a strong fight. As the Congress has fielded some of its Delhi veterans like Sheila Dikshit, Mahabal Mishra and Arvinder Singh Lovely, the election in the national capital has become triangular and hard to predict.

Diskhit will take on Delhi BJP chief Manoj Tiwari and AAP's Dilip Pandey. All the three candidates will be vying for the purvanchal votes (from people of Bihar and UP).

Thanks to the work during her days as Delhi chief minister where she regularised a number of colonies, Dikshit's appeal among all the sections of the society would come handy here. In 2014, Tiwari—also an actor—had defeated AAP's Anand Kumar, a professor at JNU, and Congress's J.P. Aggarwal, with a massive margin. Aggarwal is now contesting against Union environment minister Dr Harshvardhan for the Congress from Chandni Chowk.

East Delhi is also likely to witness a triangular contest as cricketer Gautam Gambhir will be in the fray against AAP's Aatishi. Activist-turned-politician Aatishi is known for her work to rejuvenate the government school education system under the AAP government. Congress has fielded its former state education minister and Sikh face Arvinder Singh Lovely in the seat. He is the only Sikh candidate from any of the three mainstream parties in Delhi.

Another seat that is likely to draw national attention would be South Delhi, where Congress has fielded Olympian Vijender Singh. Being a Jat, the Congress calculates that his candidature will help them win community votes in neighbouring Haryana. He will face Ramesh Bidhuri, a Gurjar leader, and the current MP from the BJP. Also in the fray is AAP's young and articulate leader Raghav Chadha.

As for the AAP, the party is relying on its work done in various slums and other areas of the capital to gain votes in the name of chief minister Arvind Kejriwal.

It is to be noted that both the Congress and the AAP were in talks till the last moment to forge an alliance to counter the BJP. But Delhi's local leadership was not in favour of the alliance as they thought both the parties had a similar vote-bank, and there was a feeling that if they field strong candidates, they could win back their constituencies in the capital.

Neighbouring Punjab is also not shying away from celebrity contests this time. Bollywood actor Sunny Deol's formal entry into the BJP and his subsequent candidature from Gurdaspur Lok Sabha seat will make it tough for outgoing Congress MP and state party chief Sunil Jhakhar.

The star appeal of Deol is set to work in BJP's favour as it looks to regain Gurdaspur Lok Sabha seat. Earlier won by BJP's Vinod Khanna, the Congress had tasted victory from Gurdaspur in the byelection following Khanna's death. Deol's bollywood persona is expected to work to BJP's advantage in the border district. It is being calculated that his films such as Border and Gaddar would come in handy when he sets to campaign from Gurdaspur.

In the neighbouring Amritsar, the BJP has fielded Union minister Hardeep Puri against Congress's G.S. Aujla, the sitting MP. In 2014, Finance Minister Arun Jaitley had lost from Amritsar to Amarinder Singh, the current chief minister of Punjab. The polling in Punjab is on May 19, during the last phase of elections.