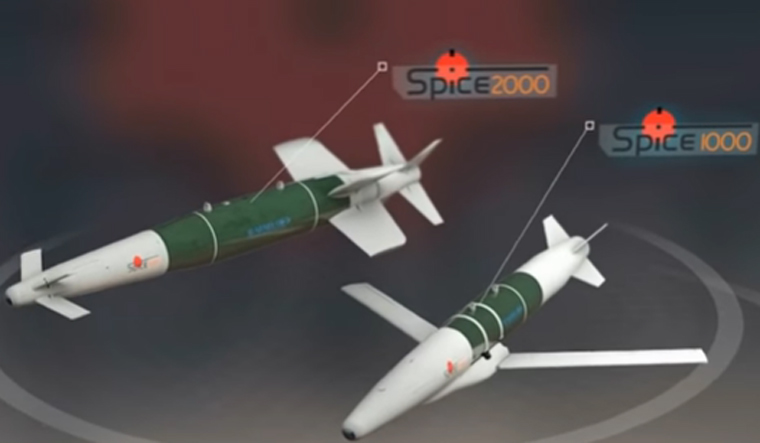 Computer-generated image of the SPICE munitions | Screengrab from Rafael video

As news of the Indian Air Force strike on terror targets in Pakistan dominated headlines across the world, speculation has begun on the kind of weapons the Mirage 2000 jets carried.

The speculation has increased as the Indian Air Force hit a target in 'Pakistan proper' at Balakot, far from the Line of Control. While initial reports said the Indian Air Force used laser-guided bombs, some media agencies claim the Mirage 2000 fighters hit the targets from 'standoff' ranges, which meant they needn't have strayed significantly beyond the Line of Control.

Typical laser-guided bombs have a maximum range of around 15km, which would expose the carrier aircraft to possible interception from enemy fighter jets and air defences. A standoff weapon would have been preferred by the Indian Air Force to hit a target in Balakot to minimise the risk of aircraft losses.

The Indian Air Force is known to operate the Israeli SPICE bomb kit. SPICE, which stands for Smart, Precise Impact and Cost-Effective, is a guidance and manoeuvring kit manufactured by Israel's Rafael. The SPICE kit adds a sophisticated guidance system—consisting of inertial navigation, satellite guidance and electro-optical sensors for pinpoint accuracy—and control fins to a conventional unguided bomb. The SPICE turns a conventional 'gravity' bomb into a sophisticated long-range munition.

Moreover, satellite-guided munitions like the SPICE are not affected by heavy cloud cover and other weather conditions, unlike laser-guided bombs.

A ministry of defence press release in late 2015 noted the induction of the SPICE-2000 into the Indian Air Force. “SPICE-2000: IAF has acquired precision guided bombs with increased accuracy and penetration for use against fortified and underground command centres. This weapon has been tested and its capabilities have been validated at an IAF firing range,” the December 2015 press release noted.

Israeli and French media have reported India was considering the SPICE munition for its fleet of 36 Rafale fighters.

The Indian Air Force also operates an Israeli-origin cruise missile called the Crystal Maze, which has been integrated on the Mirage 2000.