SP, BSP commit to go far to stop BJP in UP

From today, SP workers must know that Mayawati’s honour is my honour: Akhilesh 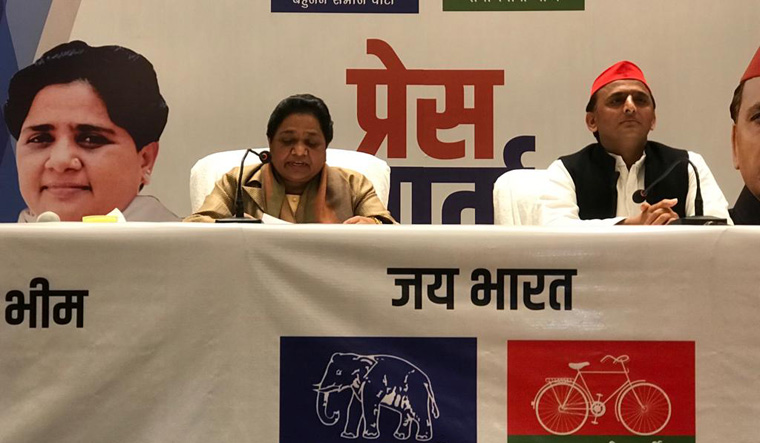 'SP-BSP aaye hai, nai kranti layee hai' (SP–BSP's arrival has brought along a new revolution with it). The slogan—dangling from electric poles leading to Hotel Taj in Lucknow, where foe-turned-friends met after 24 years—vindicated that BSP chief Mayawati and SP’s national head Akhilesh Yadav would go out of their way to bury the bitter past between them. In a joint press conference, the national leaders announced their partnership and do what is needed to prevent the BJP from surging ahead in Uttar Pradesh in the upcoming Lok Sabha polls.

Merit is debatable, but seniority is a fact. This was quite evident in Saturday's joint press conference by Mayawati and Akhilesh. Akhilesh accorded full honour to Mayawati's seniority, allowing her to speak first. He let her announce the nuances of the alliance, including the number of seats.

The podium on which the duo was sitting also showed that Akhilesh has given her high respect. The name ‘Bhim’, alongwith BSP’s party symbol, was written first, followed by SP’s logo.

In fact, Mayawati spoke more than Akhilesh at the press conference. Exhorting the party cadre, Akhilesh said, “From today, SP workers should understand that Mayawati’s honour is my honour and her insult is my insult". That was the commitment Akhilesh showed.

He also expressed his gratitude to Mayawati for sharing equal number of parliament seats between them—38 each.

However, on Saturday, for the first time, Mayawati mentioned Ram Manohar Lohia along with Ambedkar in her speech ever since she had fallen out with the SP in 1995. Mayawati described the alliance as the beginning of a political revolution of 2019. She told her cadre that she would do everything to protect its longevity.

She reminded how BSP’s pact with SP in 1993 ousted the BJP from the power. The BSP supremo has high hopes and made it clear in her speech. Mayawati also did not forget to assail the BJP for unleashing the CBI on Akhilesh in UP's mining scam.

With Saturday’s press conference, the SP-BSP pact has been sealed. It is also official that the Congress is out of the deal because both Mayawati and Akhilesh consider the party a liability and not an asset.