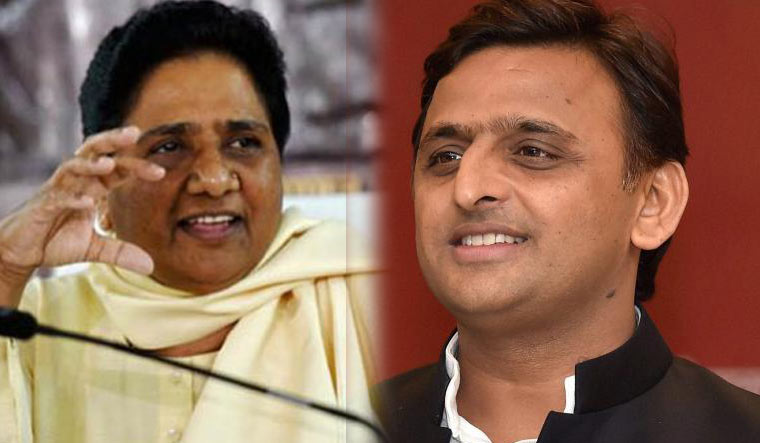 Compelled by circumstances, old foes have become friends. The alliance between the Samajwadi Party and the Bahujan Samaj Party is in final shape in politically volatile Uttar Pradesh. Leaders of both parties, Akhilesh Yadav of the SP and Mayawati of the BSP, are jointly addressing a press conference at Lucknow on Saturday to give the message they are together.

It is a matter of survival for both Bua (aunt as Mayawati has been referred to by Yadav) and Bhatija (nephew as Yadav has been referred to). The political graph of the BSP has been dwindling since 2012—Mayawati has lost consecutive assembly polls in 2012 and 2017 badly—and in the 2014 Lok Sabha polls, her party did not win a single seat.

Moreover, desertions by many erstwhile leaders like Swami Prasad Maurya, Brijesh Pathak and Naseemuddin Siddiqui, who once used to be the backbone of the BSP, has left Mayawati alone ahead of the crucial electoral battle. “Her situation is like a lonely commander without able soldiers, and a commander alone cannot win the battle,” commented a BSP leader.

Mayawati knows well that if the BSP fares badly in the 2019 Lok Sabha polls, it would be a big blow to her political career and recovery would not be easy. Mayawati had a good hold over dalit voters, who constitute about 20 per cent of Uttar Pradesh's population, but of late, the BJP has dented her traditional vote bank very badly, making the BSP quite vulnerable.

The SP, too, has had a tough time in elections in the past four years, performing poorly in the 2014 Lok Sabha polls and 2017 assembly elections. Moreover, the family feud in the Yadav clan too has weakened the SP in Uttar Pradesh. With the consolidation by Chief Minister Yogi Adityanath and the BJP wooing backward voters, the SP finds it difficult to confront the BJP alone in Uttar Pradesh.

Thus, the need for survival has brought the SP and BSP together.

Interestingly, the SP and BSP have come together on the same platform after 24 years. The alleged assault on Mayawati by SP workers in the state guest house incident of 1995 made the two parties arch-enemies. Mayawati had then vowed to keep away from the SP.

With respect to alliances, Mayawati has often been regarded as being an 'undependable' partner. In the 1990s, the BSP under Kanshi Ram had alliances with the SP and the BJP, but these tie-ups could not last long. The political ambition of Mayawati clashed always with those of the leaders of her allies, and she has never hesitated to pull the plug and topple alliances.

So, will the new SP-BSP pact survive and for how long? The answer to this question can only be left to the future.

However, the main concern for the BSP and SP is preventing the BJP from retaining a good number of Lok Sabha seats in Uttar Pradesh.

The BSP and the SP have a combined vote share of 50 per cent, which include dalits, non-Jatav voters, Yadavs, a large chunk of OBC voters and Muslims. So on paper, the SP-BSP alliance looks formidable.

But its longevity will depend a lot on sharing of seats, distribution of tickets and political ambitions of both Yadav and Mayawati.