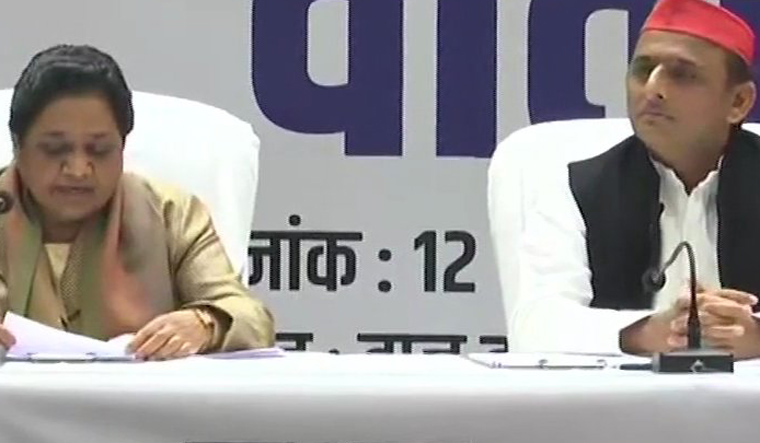 Putting an end to bitter rivalry between their respective parties, BSP chief Mayawati and Samajwadi Party leader Akhilesh Yadav formally announced their alliance for the Lok Sabha elections in Uttar Pradesh. The BSP and SP will contest 38 seats each out of the 80 Lok Sabha seats in the state. The BSP and SP have left two seats to the Congress, but declared they won't have an alliance with the grand old party of India.

Jointly addressing a press conference with Akhilesh in Lucknow on Saturday, Mayawati said the BSP-SP alliance would give sleepless nights to BJP chief Amit Shah and Prime Minister Narendra Modi. Mayawati declared the alliance would not allow the BJP to return to power at any cost.

Interestingly, Mayawati made the initial remarks at the press meet as Akhilesh sat at her side.

Mayawati said the “winds were changing” in Uttar Pradesh. Mayawati recounted that the BSP had first allied with SP in 1993, when Kanshi Ram, her mentor, had tied up with Mulayam Singh Yadav, Akhilesh's father. Mayawati affirmed that the BSP and SP would keep aside all their differences to combat the BJP's “casteist” politics, noting that the “national interest was more important”.

Mayawati also explained why the Congress was not “included” in the BSP-SP alliance. Mayawati said the Congress had performed poorly in recent elections in the state and “all sections” of society were still unhappy with the party over past incidents of corruption. Mayawati equated the BJP and Congress as being equally corrupt, referring to defence scandals during the tenure of governments of both parties.

Uttar Pradesh played a key role in providing the BJP a majority in the 2014 Lok Sabha polls, giving the party and its allies 73 out of 80 seats.