Nobel may have eluded him, but Kuvempu's achievements matched Tagore's 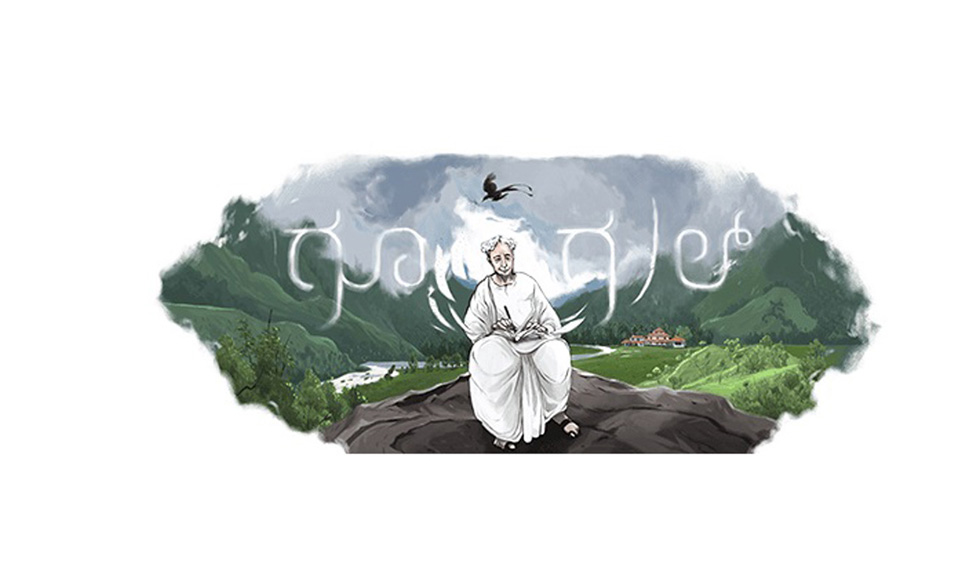 Google had dedicated a doodle for the poet Kuvempu

On his 114th birth anniversary, tributes are pouring in for K.V. Puttappa aka “Kuvempu”, the greatest Kannada writer of the 20th century, who almost matched Rabindranath Tagore in literary achievements, though a Nobel Prize eluded him like many of his Indian peers.

Seminars, symposiums and garlanding of his statues were organised throughout the state, while the Bengaluru centre of the National School of Drama will honour him with the 50th production of Malegalalli Madumagalu (bride of the mountains), a play based on his iconic novel by the same name, at Kalagrama. The nine-hour, night-long show at the sprawling open air theatre is expected to attract around 20,000 people.

This morning, the six crore Kannadigas were pleasantly surprised to wake up to a google doodle on Kuvempu, with an illustration by Upamanya Bhattacharya, depicting the poet sitting on a rock surrounded by nature, which almost resembled his karmabhoomi—Kuppalli in Shivamogga district of Karnataka.

Kuvempu, born in 1904, studied at Mysore University under the tutelage of eminent Kannada writers like T.S. Venkanaiah, A.R. Krishna Shashtri and B.M. Srikantaiah, who honed his literary skills. After obtaining a masters degree in Kannada literature in 1929, he joined his alma mater as a lecturer the same year.

Rising from the ranks, he became the principal of Mysore University in 1956. Till 1960, he served as its most popular vice chancellor. He built the magnificient university campus, Jnana Gangothri, the most beautful of its kind in the country.

He was a highly respected and towering personality. During his tenure as vice chancellor, he had differences of opinion with the government and resigned from his post. Then chief minister S. Nijalingappa visited him at his residence and requested him to withdraw his resignation.

Influenced by English poets like Shelly, Wordsworth and Keats in his formative days, Kuvempu published a collection of English poems when he was barely 18. Irish writer James Cousins, reportedly appreciating Kuvempu’s effort, commented that one can be a good writer only in one’s mother tongue.

Kuvempu began writing in Kannada. Over the next seven decades, he produced a torrent of outstanding literature.

Kuvempu, who was always disdainful of felicitations and praises, had once written, keerthi shani tolagache.. (Get out, you bunch of accolades), but ironically, they followed him relentlessly.

Sri Ramayana Darshanam, the epic, which is a blend of old, medieval and modern Kannada, won him a host of awards—the first Jnanpith for Kannada, the Kendra Sahitya Akademi Award and Padma Bhushan. He was later decorated with Padma Vibhushan, Karnataka Ratna, Pampa and Rashtra Kavi awards, among others.

Kuvempu’s novel Kanooru Heggadathi was adapted into a movie by Girish Karnad. This novel, along with Malegalalli Madumagalu and a collection of his poems, are available in English.

Kuvempu’s childhood home at Kuppalli has been turned into an excellent museum, which showcases his life and works. It has become a monument and attracts thousands of people every year.

Your form could not be submitted.
This browser settings will not support to add bookmarks programmatically. Please press Ctrl+D or change settings to bookmark this page.
Topics : #Google Doodle