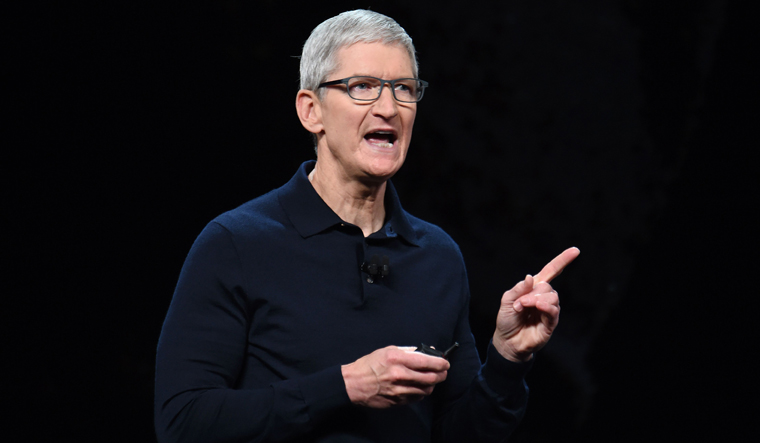 Despite a stronger-than-expected third-quarter earnings, Apple stock was down over 2 per cent as Tim Cook warned that the Cupertino, California-based tech giant is expecting supply constraints owing to a global semiconductor shortage that could affect iPhone and the iPad in the coming quarter. “The majority of constraints we’re seeing are of the variety that I think others are seeing, that I would classify as industry shortage,” Cook said on a call with analysts.

Although Apple didn’t give an exact picture of how bad the impact of the global semiconductor shortage would be on its future launches, CFO Luca Maestri said the company expects them “to be greater than what we experienced during the June quarter.” Maestri said that Apple expected less than 36 per cent growth in the September quarter because of foreign exchange rates, less growth in its services business, and supply constraints for iPhones and iPads.

The statements from Apple's leadership comes a day after electric car manufacturer Tesla's CEO Elon Musk drew attention to supply shortages. In a call with investors and analysts, Tesla executives said that volume production growth for this year will depend on parts availability.

On Tuesday, Apple said it registered a net income of $21.7 billion in the June quarter as against $11.2 billion in the year-ago period. The total net sales increased to $81.4 billion from $59.6 billion from June 2020 quarter. These are global numbers and the company does not disclose country-specific financial numbers.

"We set a new June quarter revenue record of $81.4 billion, up 36 per cent from last year, and the vast majority of markets we tracked grew double digits, with especially strong growth in emerging markets, including India, Latin America and Vietnam,” Cook added. Apple, which competes with players like Samsung and OnePlus in the premium smartphone segment, has been aggressively ramping up its presence in the Indian market.

In the past too, Apple has highlighted that it sees growth opportunities in the Indian market. Apple also plans to set up brick-and-mortar outlets in India in addition to its online store as the iPhone maker looks to further cement its position in one of the world's biggest smartphone markets.

In the past, Apple has stated that it is keen on offering online and in-store experiences to Indian users that are at par with its global standards and that it aims to open its maiden retail store in India.

The growth seen by Apple has been noted by research firms like Counterpoint as well. According to Counterpoint, Apple captured the sixth spot in terms of shipment in India in the October-December 2020 quarter with 171 per cent year-on-year growth, and 93 per cent growth in 2020 over the previous year.