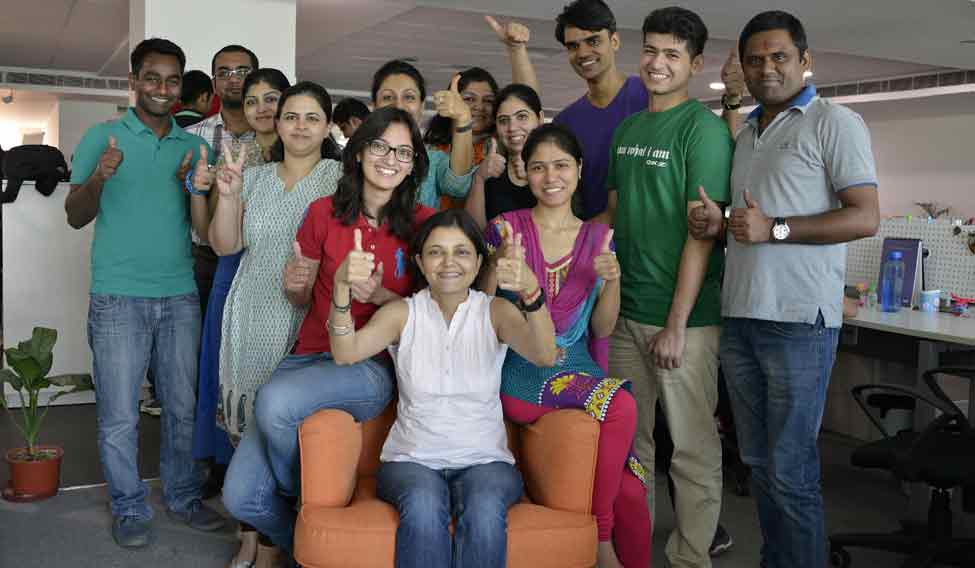 Girls' day out: Chahal with her team. What women need is equal opportunity and not charity, she says | Arvind Jain

When Sairee Chahal, 39, founded Sheroes and tried to get companies on board, the people she met thought she was from a women’s self-help group training women in papad and pickle making. Some thought she was looking for a donation for her NGO under their company’s Corporate Social Responsibility policy.

“These are stereotypes that people generally associate with women’s organisations,” says Chahal. “The women are either the shrill feminist types or the NGO types. Also, there  is this misconception that women need charity.”

The Delhi-based startup, which stands for ‘she’ plus ‘heroes’, is anything but a stereotype. It is a novel attempt to bring career discussions to the forefront for women, especially urban women. Often, after marriage, a woman’s career takes a backseat because she has to manage her house and take care of her husband and children. Approximately 48 per cent of women drop out of their jobs after becoming mothers. Chahal saw an opportunity to bring these women, as well as others who find it difficult to get jobs suited to their profiles, back to work.

There was no particular trigger but Chahal had been toying with the idea of starting Sheroes ever since she observed fellow women employees at Saita Consulting, dropping out because of one reason or the other. Something needed to be done to sort out women’s career issues.

In 2011, she started Fleximoms, which provided flexible work opportunities to mothers. Although Fleximoms was doing well, Chahal realised that women needed much more than just flexible options. They needed mentoring, career guidance, business opportunities and regular corporate jobs. She also felt that discussions on career needed to start much earlier. Sheroes, for example, has a Campus SHEROES Program, a leadership and growth initiative for young women in colleges and universities.

“Sheroes is a bigger, better and wider version of Fleximoms”, says Chahal.

Sheroes was started in January 2014 and, in less than 22 months, has helped five lakh women find careers suited to their temperaments. There is a large number of career resources available to women on Sheroes. So, it does not matter whether you are qualified enough for a regular job. If you have a hobby and you want to convert it into a business idea, Sheroes can help you with that. For example, if you are a painter or a sculptor, you can sell your products online. If you are not on the creative side but still want to be in business, you can become a franchisee partner. There are part-time jobs, internships, regular jobs, freelancing or work from home options available on Sheroes. All you need to do is create a Sheroes profile and search for suitable opportunities.

There are mentors who take live calls during mentorship sessions to help women confused about their career and its direction. On Sheroes’s mentor list are Intel India’s sales and marketing director Debjani Ghosh; Max life’s marketing and sales director Anisha Motwani; entrepreneur Prajakt Raut and several others.

Chahal narrates an experience as a mentor at one of the sessions. A woman from Jharia, a small town in Jharkhand, called. She came from a conservative family and despite having a master's degree in English, she had never worked all her life. She wished to work now that her children were settled in the US and was wondering how Sheroes could help her.

“That was a life-changing incident for me,” says Chahal. “It was commendable that somebody who had spent 25 years of her life in a conservative family had kept her ambition alive.”

Unlike earlier, today new technology companies are offering part-time jobs to women who can't work full time. Online startups have created a demand for bloggers, content writers and mystery shoppers. So, if someone is based out of Patna, she can get a job that doesn’t entail leaving the city. Sheroes is also planning to feature on its website career opportunities offered by small establishments like a legal firm or a clinic in a tier II town.

A key component of Chahal’s career community is the 6,000 companies that work with Sheroes to hire women in their organisations. But convincing them was not easy.

“We told them that it was about women in our households,” says Chahal. “And we made a good business case for hiring more women. There is greater talent retention and value creation when you hire them. Do it if it benefits your company.”

Women, she feels, are not seeking charity but are asking for equal opportunity. She gives the example of job hoppers. “We tell the heads of companies that rather than hiring job hoppers, why don't they hire two women who will work part time for them with a bit of flexibility. They will stay with them longer and they will be better workers.”

Her efforts have not been in vain. Today, companies like Intel, Honeywell, Paytm, MakeMyTrip and Religare hire through Sheroes.

The monetisation model is simple. Women register for free and pay only if they need coaching or some specific help with a job. The companies also join for free. However, if they want more value addition, assisted services, handholding or filtering of candidates, then they need to pay.

Chahal, mother of a 10-year-old child, has a degree in Russian language, an M Phil in international relations and an MBA. Her first job was as a business reporter for a magazine called A&M.

She might be audacious but you need audacity to change mindsets when it comes to hiring women.

Sairee Chahal
A goof-up
Not recognising a big Bollywood star  sitting next to me  at an event recently
Childhood dream
A world of books  and tranquillity
On speed dial
My family, my babysitter and my team
First office
A flat in Vasant Kunj, Delhi
Top on to-do list
Set up a yoga retreat