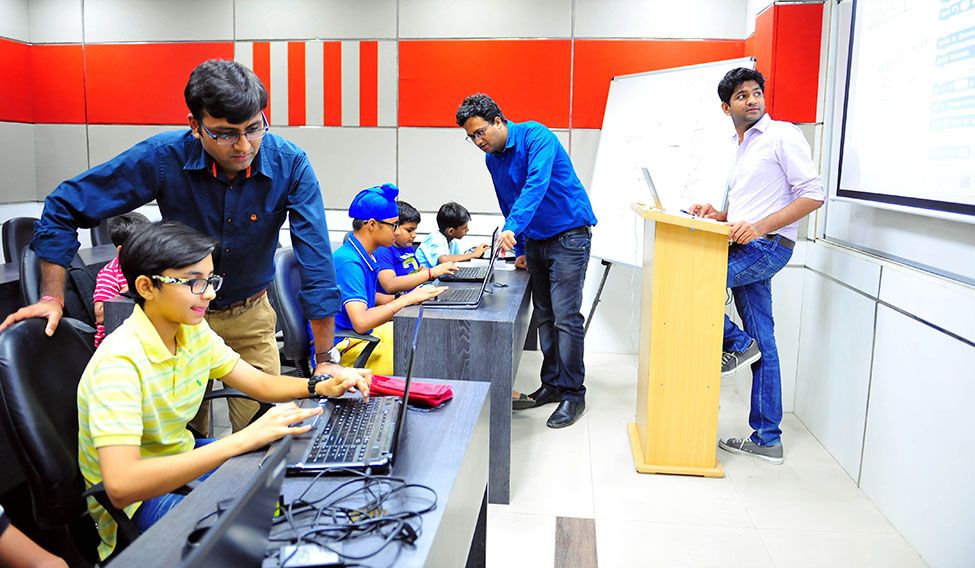 Keshav Garg’s eyes are fixed on the orange ball on his laptop screen. Cursor up, cursor down… oh it’s stuck! Garg tries again and this time, the ball moves smoothly through the rows… and bingo! It has reached the flag. Garg, 10, is playing the maze game on Scratch—a visual tool developed at the Massachusetts Institute of Technology to help children learn how to program. Garg is excited about playing and creating games on Scratch. In fact, he has created complicated games for a child his age. He, along with ten other children, is learning programming at Coding Blocks—a start-up that teaches students how to code. The children are part of Coding Blocks Junior.

The one-year-old startup based in Delhi is attracting students from IITs, IIITs, Delhi College of Engineering and several other engineering colleges across the country. This is the first batch of children learning programming there but 17 senior batches have completed the courses which are 8 to 13 weeks long.

The founders, Ankush Singla and Anushray Gupta, left cushy jobs at Facebook in the US to start Coding Blocks. They were assisted by their mentor Manmohan Gupta and friend Kannu Mittal. Gupta had taught them mathematics at Vidyamandir Classes, an IIT JEE coaching institute in Delhi.

At Facebook, Singla had been responsible for hiring young graduates from the US and India; there were times when he could not find a single suitable candidate from India. That’s when he realised that computer science graduates from IITs, second-rung engineering colleges and private colleges in India were not equipped with even basic programming skills.

Singla says that college curricula in India have become so outdated that a computer science graduate today does not know how to build a website or a mobile application. “Even if you want to start something of your own, these skills are essential,” he says.

After meeting scores of students, Singla and Gupta realised that the computer education institutes in India were also not imparting the requisite coding skills to students. This was a market waiting to be tapped.

“Students are keen to learn but they are not able to find the right kind of resources,” says Gupta. “The teachers are ill-equipped, the syllabus is not matching the needs of the industry and worst of all, the institutes have a very standardised way of teaching programming, which is not correct.”

Computers and mobile phones are so ubiquitous today that programmers are in high demand. Globally, software is one of the largest hiring industries. And it is not just computer science graduates who become programmers; it could be anyone with good programming skills.

Unlike in India, schools in the US have included programming in their curricula as they believe it teaches vital problem solving, logical thinking and communication skills. It is to impart these skills that Singla and Gupta have started the course for juniors. “We make sure the classes are fun by teaching through games and visual activity,” says Gupta. “They just have to drag and drop stuff.”

Currently, Singla and Gupta conduct most of the classes themselves but they plan to hire more teachers soon and train them. “While other institutes try to ‘program’ us to code like robots, here we are taught to think about the questions,” says Prajna Mehndiratta, a former student at Coding Blocks.

In addition to equipping students with coding and programming skills, the startup assists them with placements. The startup says its students have found jobs at Expedia, Amazon and several other companies. The courses offered at Coding Blocks include Pandora for Android app development; Elixir for web development using Python; Crux, a foundation course in Java; and Launchpad, a foundation course in C++. Courses like Pandora and Elixir have helped students build mobile apps and websites. Parikh Jain and Sanchit Narula have designed an app called Call Scribe which lets you organise notes from different incoming and outgoing calls. The app is available on Google’s Play Store. Arpan Garg and Prateek Narang have developed the website of one of the city’s hospitals replete with a hospital management tool.

Surprisingly, Singla and Gupta say they are not actively pursuing investment offers. “A startup’s success should not be measured by the amount of funding it gets,” says Singla. “The more self-sustaining I am, the better I am doing.” The venture was started with Rs15 lakh generated through friends, family and the co-founders’ savings. Since then, internal accruals have been sufficient to meet the running costs of the firm. Its profit margins, too, have been satisfactory at around 40 per cent.

Gupta says some of the students of Coding Blocks have become programming wizards. He recalls a student who was really bad in computer science and is now a rockstar among his peers. “He has become so good with programming now that he points out mistakes in the lectures of his college professor,” he says.

A goof-up
We asked the first batch of students to come on June 1 not realising it was a Sunday
Childhood Dream
To open a world-class school in my hometown—Jind in Haryana
On Speed Dial
Nearby food delivery restaurants. We get 20 to 25 minutes for lunch so can't afford to waste time
First Office
Anushray's living room
Top on to-do list
To travel to the Himalayas for at least a month and be away from phones, laptops and all other gadgets