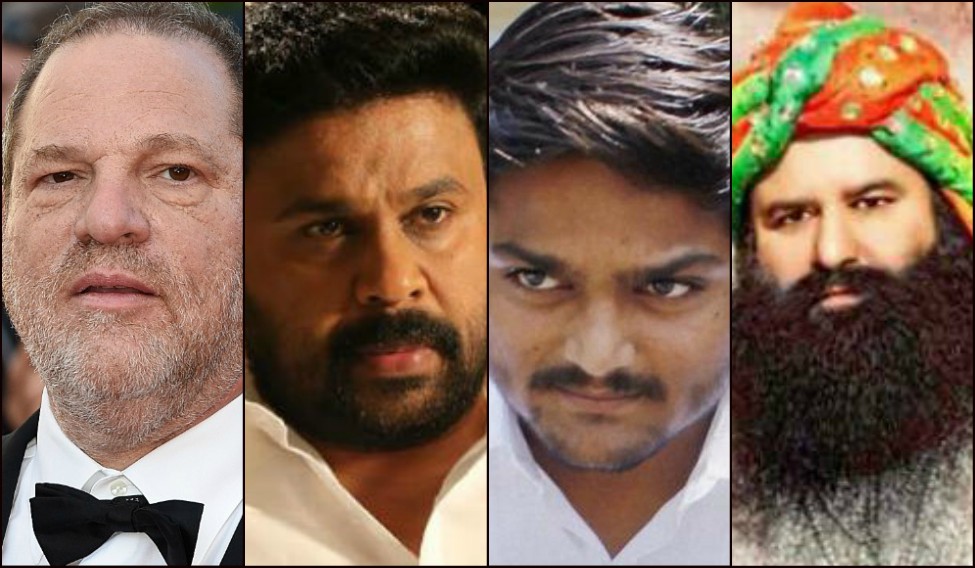 The year 2017 saw a fair amount of air, print and online space being hogged by scandalous deeds of famous men. These were mighty men indeed, and their fall from grace was fatal (save Hardik Patel and the CD affairs). Here are a few scandals that defined 2017.

The year witnessed the spectacular fall from grace of one of the top Hollywood names— Harvey Weinstein, a successful film producer with some of the finest films and a slew of Academy awards to his credit. Two The New York Times reporters—Jodi Kantor and Megan Twohey— exposed how the much-revered Hollywood mogul is a predator in producer’s attire.

He has, allegedly, been sexually harassing women in the industry for decades with impunity. Even more serious allegations were published by the New Yorker, with many leading names in the industry, including Ashley Judd, Angelina Jolie and Gwyneth Paltrow coming out with revelations about the harrowing experiences they faced from Weinstein.

The accusations against him ranged from indecent exposure, assault to forceful sex. Most of the victims claimed that they were intimidated into silence as they were afraid that rubbing him the wrong way could spell doom for their acting careers.

Even as Weinstein refuted all the allegations levelled against him, he found little support in his Hollywood buddies, with one of them, the mighty Meryl Streep, who once called him ‘god’, going on to call him ‘disgraceful’.

He was a spiritual guru, a rockstar, a film star, a political star maker, and what not. A man who could single-handedly write, direct, produce a film and play the lead, Gurmeet Ram Rahim Singh was such a tall figure among his fans and followers that he had to remind them that he is only an 'Insan (human)'—he would make them call him by that moniker.

Yet, when the law of the land caught up with him for his crimes and misdemeanors—chief among them being the sexual exploitation of two of his former female followers, a case registered in 2002—the man shed tears in court like any ordinary 'insan'. He was sentenced to 20 years in jail on August 28.

Besides the sexual exploitation charges, he was also accused of murder, criminal intimidation and castration of his followers (or in the lingo of GoT enthusiasts, an attempt to raise an army of the unsullied).

His conviction led to widespread violence after frenzied followers of the ‘bling baba’ clashed with cops in Panchkula in Haryana where he was convicted. Violence spread to other parts of north India, including Punjab, Uttar Pradesh and Delhi. As many as 38 people lost their lives in the violence that followed the conviction.

2017 witnessed another scandal, this time down in the south. Kerala cine actor Dileep, a darling of family audience, faced disgrace when his name cropped up in connection with the abduction and molestation of a leading female actor.

Kerala was shocked, fans were flabbergasted and the media in the state went berserk as it became one of the biggest scandals ever to hit the largely peaceful industry that Mollywood is. People realised that the janapriya nayakan (popular hero), as he is famously known, is not such a darling after all, despite the many films that showed him as the epitome of all that is good .

Despite Dileep’s initial claims of innocence, evidence and statements of the chief accused in the case, Sunil Kumar alias Pulsar Suni, pointed fingers at the actor. According to the investigating officers, the actor hatched the conspiracy to abduct the actor as he was upset with her for siding with his ex-wife and actor Manju Warrier. Dileep had divorced her and married another actor, Kavya Madhavan.

On July 10, he was arrested on charges of criminal conspiracy. He walked out of prison on bail on October 3, after spending 85 days in prison.

The recently concluded Gujarat assembly elections provided fodder to the news channels for months. From Prime Minister Narendra Modi’s seaplane ride, Congress president Rahul Gandhi’s frequent temple tours and his new-found fancy for religion, to pointing figures at Pakistan for allegedly trying to trounce the saffron party in the state, the polls upped the bizarre quotient of news reports.

These could be political stunts, part of every bitterly fought polls, one may argue. That’s until you recall the ‘sex cds’ released one after another. The CDs featured Patidar Anamat Andolan Samiti convenor Hardik Patel who was trying to upset the apple cart of the BJP ahead of the elections and appeared to be succeeding in his attempts.

One of the videos had a man who looked like Patel, along with a woman in a hotel. In a nation that neither understands freedom nor consent, the video had all the ingredients of a scandal—a man, woman and a hotel room.

Another ‘scandalous’ video showed a group of four, including a girl, in a room and one of the men resembled Patel. The videos were the talking point in prime time TV even as the young leader dismissed the same, saying "Dirty politics has begun now. Defame me all you want, it makes no difference to me. But this is an insult to the women of Gujarat."

The young leader's tryst with scandal was indeed a dirty trick, as he rightly pointed out, but it did manage to hog enough TV time.