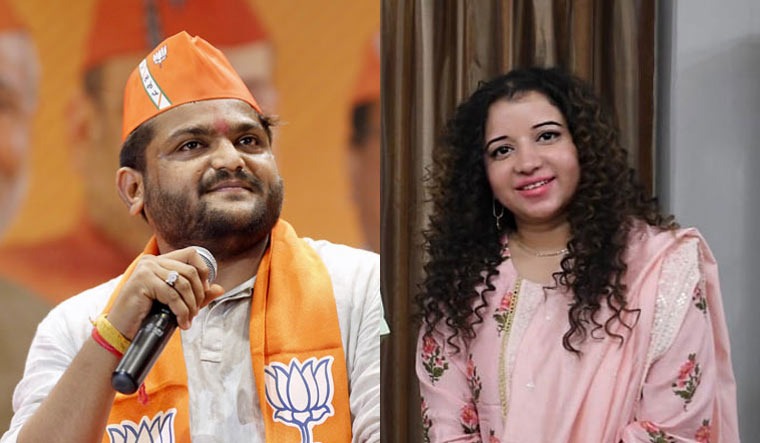 The ruling BJP in Gujarat got a shot in the arm on Thursday when former Congress leaders Hardik Patel and Shweta Brahmbhatt joined the party. They were inducted into the BJP by the state party president C R Paatil at a function held at Shree Kamalam, Koba, near Gandhinagar.

Patel was the Gujarat Congress working president and Brahmbhatt was an AICC delegate from Gujarat and had unsuccessfully contested the 2017 assembly elections.

The two joined the saffron party in a span of about half an hour.

Patel had shot to fame by leading Patidar Reservation Stir in 2015.

Though Patel and Brahmbhatt have nothing to do with each other, sources said that a couple of days ago Patel had thrown tantrums asking why he was being equated with Brahmbhatt. It is believed that it is for this reason that the BJP planned their induction ceremonies separately.

Except for Paatil and former deputy chief minister Nitin Patel, none of the top party leaders in Gujarat was present on the dais when Patel joined.

While addressing the media and answering questions, Patel said that he had joined the BJP as a soldier. He praised Prime Minister Narendra Modi.

Interestingly, both Paatil and Nitin Patel left the stage before Patel began to address the media. Normally, the BJP state leaders remain present when the person who is inducted addresses the media. On Thursday, only BJP spokespersons and party youth leaders were present to flank Patel.

Some of his former colleagues during the times of Patidar Reservation Stir, who had joined the BJP earlier, were also conspicuous by their absence.

Patel’s joining the BJP has evoked mixed responses from his former colleagues.

It is believed that Patel has made a mistake and his career will be “finished” like that of Alpesh Thakor, a Congress turncoat, who contested an assembly election on a BJP ticket from his seat but lost.

However, having joined the BJP, Patel can seemingly get relief in several cases, including that sedition, that is against him.

In stark contrast to Patel, it is believed that the BJP has inducted Brahmbhatt to give her some role. She had called on Modi in Gandhinagar during one of his recent visits to the state.

Both Patel and Brahmbhatt joined the BJP along with their supporters.

Saints from the Swaminarayan sect were present to bless Patel.

Patel took out a two-kilometre roadshow to reach the state BJP headquarters.

While the BJP makes use of Patel or cuts him to size only time would tell, but he's joining the BJP is certainly a loss for the opposition Congress for he brought with him youth.

Patel claimed that every week more Congress leaders would be resigning.