To the delight of Bondologists, Sam Mendes decided to give a glimpse of the early life of the superspy in the hugely entertaining Skyfall. The 24th Bond flick, Spectre, takes off from where fans were left at the end of the previous Bond film—Skyfall (family estate and childhood home) where Judi Dench's M meets with a rather unexpected twist of fate at the hands of Raoul Silva.

Now, the sculpted spy has one last mission that his former mentor wants to complete and he sets off to accomplish it despite being “grounded” by his current boss (Ralph Fiennes who fails to match the towering presence of Dench's M) for causing mayhem in Mexico City that only Bond is capable of.

As one of the characters mouths, although in a totally unrelated context, the mission and all that follows is “predictably moronic” with the Bond teaming up with Ben Whishaw's Q and Naomie Harris' Moneypenny to chase a shadow figure, Ernst Stavro Blofeld, who seems to have died years ago, but now heads SPECTRE (Special Executive for Counter-intelligence, Terrorism, Revenge and Extortion). He also faces threat from an Orwellian surveillance system that seeks to end the MI programme.

From Sam Smith's 'Writing's on the wall' at the opening credits, the director who has brought on board the writers of the previous Bond film John Logan, Neal Purvis, Robert Wade and Jez Butterworth, attempts to establish the connection between many of the previous Bond thrillers with SPECTRE, besides trying to address the perils of an all pervasive surveillance system. However, the film ends up being a typical action thriller with things exploding every now and then and frequent chases on air and earth.

The opening (customary) action sequence in Mexico City during the Day of the Dead celebrations taken in one long, frenzied shot, the snow-clad valleys and hills of Austria, the aerial shot of Moroccan port city Tangier and a magnificently lit city of Rome are visually stunning. While the cinematography is commendable, the film would have benefited if edited tad more tighter. 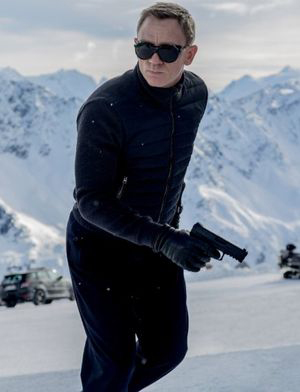 On the performance front, Daniel Craig sleepwalks through the role while Christoph Waltz's Bond baddie Blofeld fails to bring the chills the previous Bond villains Javier Bardem or Mads Mikkelsen brought on screen. Andrew Scott almost reprises his Jim Moriarty act with his calm demeanour masking his villainous self and Bond girl Lea Seydoux serves the purpose of being eye candy.

Bellucci fans, walk into the cinemas keeping your expectations as low as you possibly can as the superspy's affair with the Irreversible star lasts no more than a few minutes and ends abruptly as the Indian Censor Board had decided to have a say in how long Bond can kiss his girl.

Bautista may be a terror to those in the ring, but as a henchman who is up against Bond, he fails to ooze the menace that Richard Kiel's Jaws spewed although he appeared to have taken a few skull-crushing lessons from Gregor Clegane.

Neither does the film offer much for gadget enthusiasts as the director appeared to have taken a fancy for the sculpted spy's brute strength than any of the tricks that the highly sophisticated gizmos that Bond is usually gifted with.

In the end, if your idea of a lazy weekend is an out-and-out action flick, you will get your moolah's worth from this Bond film which sticks to the formula of chases, girls, explosions and funny one-liners. For those of you who thought that Skyfall was only the beginning of what Mendes has to offer, Adele's title song in the beginning of the director's first Bond flick seems to have the answer—'For this is the end'.