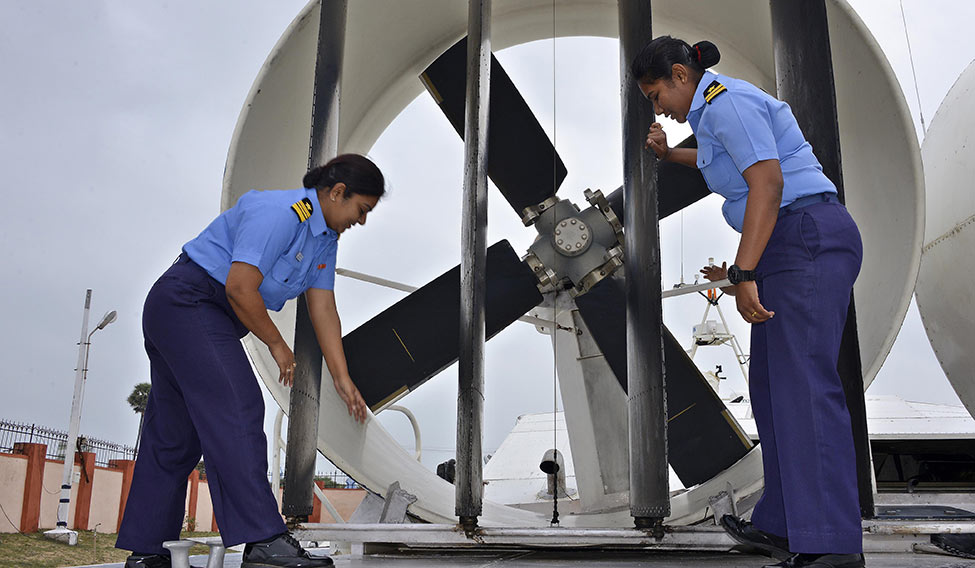 The sea is rough as gusty winds blow over the Gulf of Mannar, a strip of sea off Mandapam on the east coast of Tamil Nadu, the point closest to Sri Lanka. Assistant Commandant Shirin Chandran of the Indian Coast Guard turns on the wipers to clear the windscreen of her favourite machine. It is that time of the year when there is a slight nip in the air in an otherwise hot location, which is nine degrees from the equator.

Shirin and her colleagues Anuradha Shukla, Vasundhara Chouksey and Sneha Khatayak belong to an elite group of first-generation women hovercraft officers of the Coast Guard, who have mastered the amphibious machine so well that they are now assigned combat roles at sea. While Shirin and Deputy Commandant Anuradha are part of the 79 ACV (Air Cushion Vehicle) squadron at Coast Guard station at Mandapam, Sneha is posted at Haldia in West Bengal and Vasundhara at Okha in Gujarat. 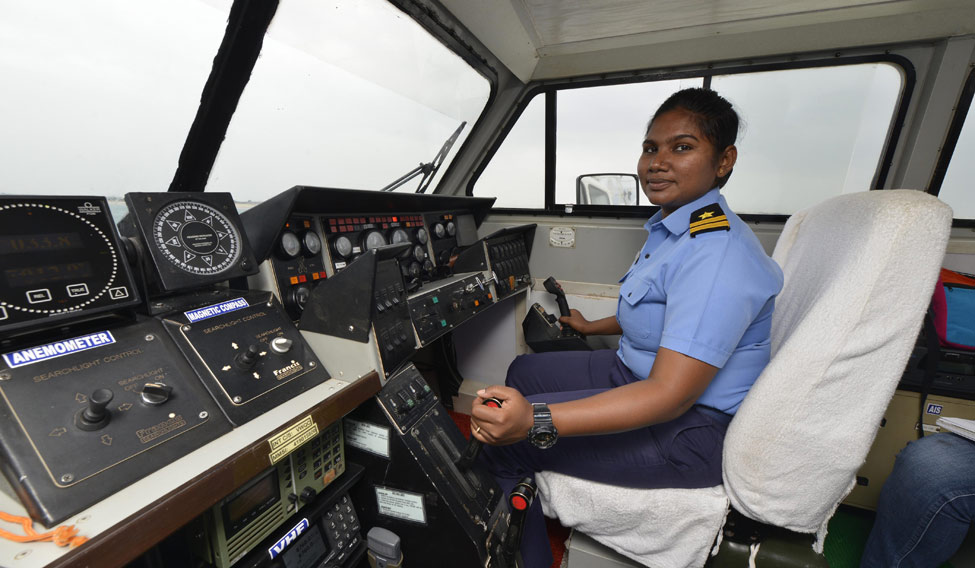 “It is for the first time that women officers are operating hovercraft. It is a proud moment for the Coast Guard to have women in combat role guarding our international water [borders] and they have excelled in navigational skills and operational capabilities,” says Commandant S. Bhattacharjee of the Mandapam station.

THE WEEK spent two days with the women officers at Mandapam. As we venture into the sea aboard the hovercraft for daily reconnaissance along the International Maritime Boundary Line (IMBL), Anuradha, our navigator, recalls how she broke barriers in her journey from Gomti Nagar in Uttar Pradesh to the Gulf of Mannar. “The only river I had ever seen was the Gomti,” says Anuradha, who hails from a traditional family in Lucknow. “I studied in a school where there was no furniture. When I first heard of the National Defence Academy, I wanted to become a soldier. But I was told that I could not do so because I was a girl,” she says. After the rules were changed in 2006, Anuradha appeared for the combined defence services examination. “I could not make it to the Army, but I was lucky and joined the Coast Guard,” says Anuradha, who has now completed six years in service.

As we reach Kundakal point, the team launches its sanitisation exercise. The contingent is led by the two women officers, who, armed with automatic rifles, jump off the craft. The uninhabited island is secured in a matter of minutes and we deboard. This procedure is followed whenever the squadron gets intelligence inputs about nefarious activities on sea or land around the 22 uninhabited islands in the Gulf of Mannar. 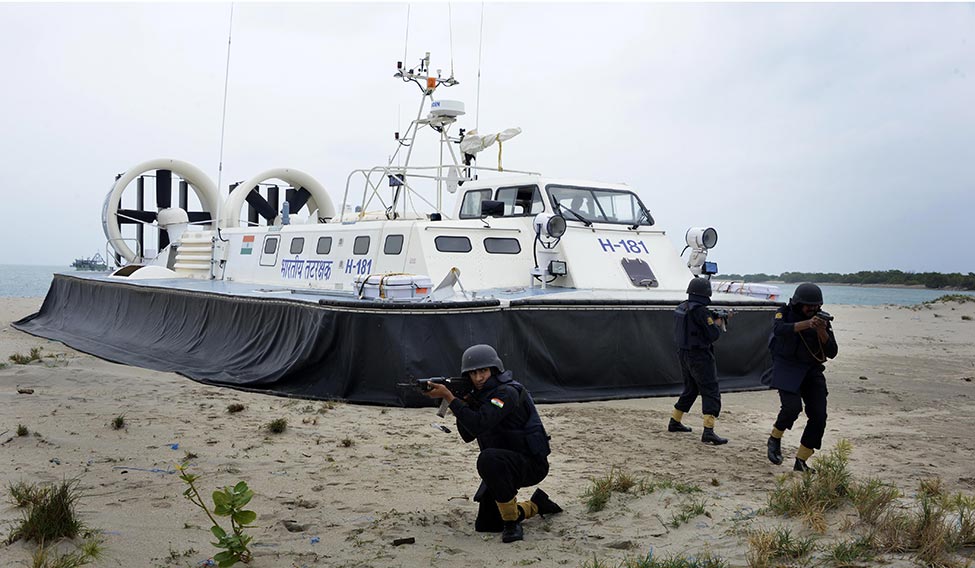 “Once we got an intelligence input that the IMBL was breached and some men from Sri Lanka had entered. Within minutes, the hovercraft was at sea. I felt that my heart would jump out and hit the windscreen. It is, however, good to have fears as you learn how to fight them,” says Shirin, who hails from Palakkad in Kerala. “The island sweeps are conducted twice a month while round-the-clock vigil is kept in the Gulf of Mannar and the Palk Bay,” she says. 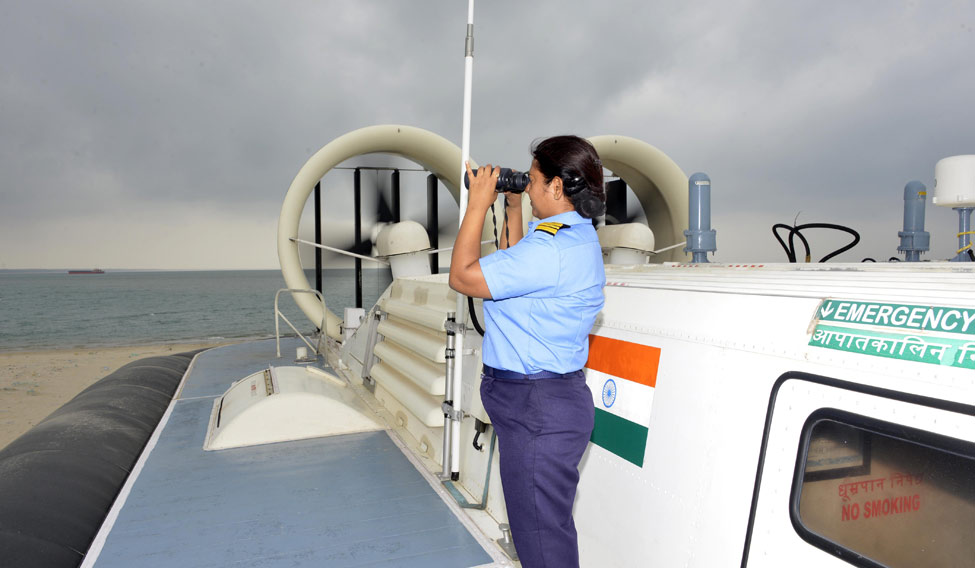 Apart from reconnaissance and patrolling operations, hovercraft are deployed to assist pilgrims who cross the border into Sri Lanka to attend the Katchatheevu festival at the St Antony’s church. At the boundary line, the pilgrims are handed over to the Sri Lankan navy and upon their return, they are assisted back into Indian waters. The festival is held in February each year.

Commandant K.S. Bora of the 79 ACV Squadron, who trained the women officers, says the transition of women from administrative and logistics roles to combat is historic. Coming from training academies where their ratio to men is 1:20, they have shown the way to future generations, he says.

For the young women officers, it is an exciting challenge. “Every time I enter the hovercraft, it is a challenge,” says Shirin. “It is because whatever I do, it reflects on the person who has trained me. The men whom I am leading are looking up to me for directions.” 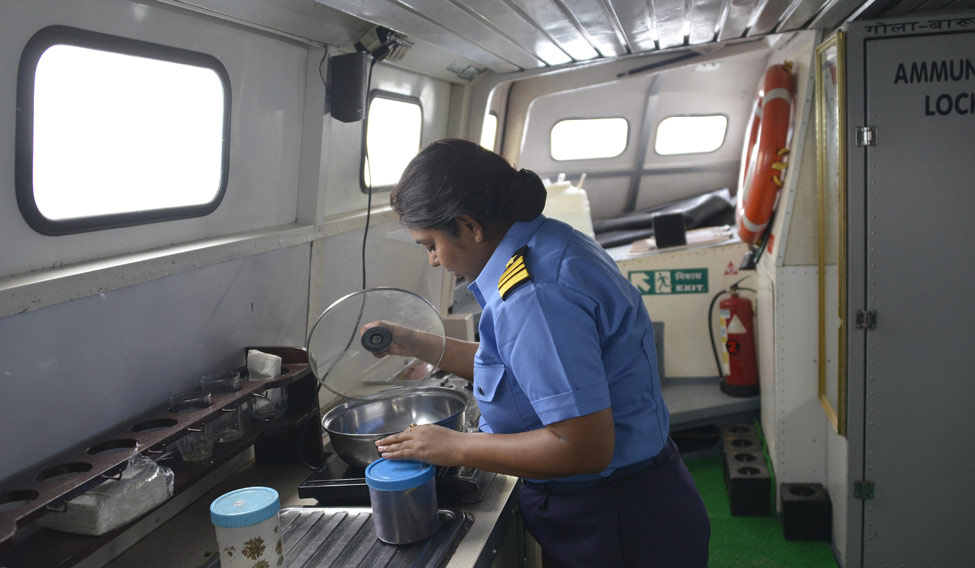