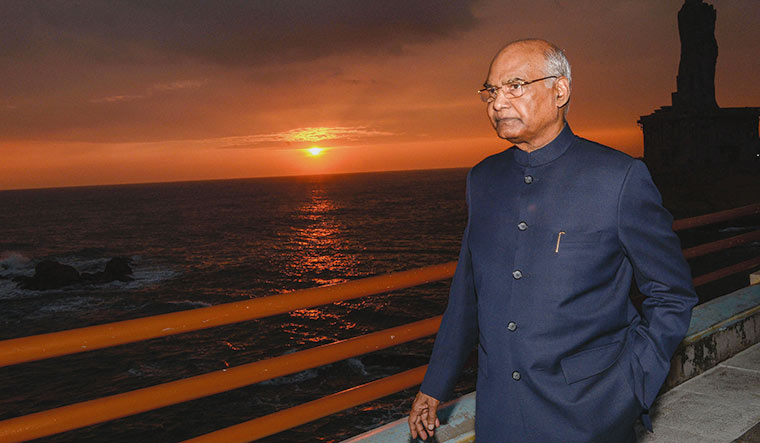 In June 2021, when Ram Nath Kovind travelled to his village for the first time after assuming charge as the 14th president of India, he chose to travel by train. He took a helicopter only for last-mile connectivity. As the presidential chopper touched down at Kovind’s village, Paraunkh, in Uttar Pradesh, he bowed down and touched the ground. It was an emotional journey for him. He met old friends and relatives and prayed at the village temple. “It was the inspiration of this motherland (village) that took me from High Court to Supreme Court, from Supreme Court to Rajya Sabha, from Rajya Sabha to Raj Bhavan and from Raj Bhavan to Rashtrapati Bhavan,” he recalled.

An incident during that visit, however, left him quite upset. When he reached Kanpur, the VIP movement had led to traffic snarls. A woman who was suffering from post-Covid complications got held up in the ensuing block and was dead by the time she could be taken to hospital. When Kovind came to know about it, he was deeply “anguished and upset”. Senior district officials were given a dressing down and were told to publicly apologise to the family. It was the president’s way of connecting with the common man.

Unassuming and sober, Kovind shunned publicity, yet he occasionally broke the strict protocol associated with the top constitutional position. When Prime Minister Narendra Modi visited Paraunkh last month, Kovind broke protocol and travelled to his village to play the gracious host. While visiting his alma mater BNSD Inter College in Kanpur last year, he came down from the dais and touched the feet of his nonagenarian teachers, much to the surprise of everyone present. As he demits office this month, Kovind, the second president from the dalit community and the first from the BJP, can be proud of a non-controversial stint at the Rashtrapati Bhavan.

As president, Kovind followed the rule book in letter and spirit. He shared a cordial and mutually respectful relationship with Modi. He was always quick to give assent to legislations approved by Parliament. He also rejected six mercy petitions.

Kovind visited the Ram temple in Ayodhya last year and donated Rs5 lakh from his personal funds for its construction. On Eid in 2020, he invited a young Muslim cyclist who was a class nine student in a Delhi school to the Rashtrapati Bhavan and gifted him a racing cycle after learning about his dire financial situation.

Kovind has always been ready to welcome the common man to the Rashtrapati Bhavan. “I stay in one portion of the estate, the other part should be open to people for visiting,” he is learnt to have said. “People had been intimidated by the presidential palace. He demystified it,” said the source. When a renovated playground was inaugurated inside the estate, he invited slum children to play there.

Being a lawyer himself, Kovind did not shy away from reminding the higher judiciary about the need for judicial reforms. Quoting Felix Frankfurter, a former associate judge of the US Supreme Court, Kovind once told a gathering of judges, “History teaches us that the independence of the judiciary is jeopardised when courts become embroiled in the passions of the day and assume primary responsibility in choosing between competing political, economic and social pressures.”

On another occasion, he told the judiciary that if the president could be criticised, there is no reason why members of the judiciary could not be pulled up. “All three organs of the state—the judiciary, the executive and the legislature—are obligated to be models of good conduct. They also need to be careful not to cross into each other’s finely-defined spaces or give the opportunity to read transgressions even when none is intended,” he said.

Another distinct sentiment in Kovind’s speeches has been reverential references to Mahatma Gandhi and B.R. Ambedkar, two of his idols.

Kovind gave out a symbolic message during his last official function on June 14, a day before the presidential election was announced. He quoted Arjuna’s last shloka from the Gita where the warrior talks about getting clarity of vision and role. “My dear Krishna, O infallible one, my illusion is now gone. I have regained my memory by Your mercy, and I am now firm and free from doubt and am prepared to act according to Your instructions.”