BJP ticks all the right boxes by nominating Droupadi Murmu

It is part of BJP's strategy to engage marginalised communities 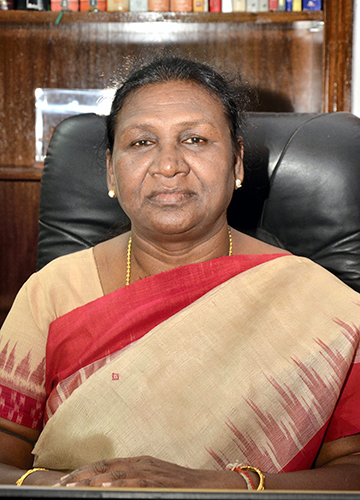 Not everyone gets a birthday gift like Droupadi Murmu did. A day after she turned 64, BJP president J.P. Nadda announced that she would be the National Democratic Alliance’s candidate for the post of president. She is set to occupy the country’s top constitutional post, as a few non-NDA parties like the Biju Janata Dal have already offered her support. As the country’s 15th president, she will have many firsts to her credit.

Murmu, who hails from Odisha, will be the second woman to occupy the post, and the second president from eastern India after Rajendra Prasad, who was from Bihar. With her nomination, the BJP has ticked all the right boxes. Her’s is a journey from the country’s backward, tribal region to the pinnacle of its constitutional establishment. She rose through the ranks with her grit and stoicism, despite personal tragedies.

With Murmu’s nomination, the BJP has once again sent a strong political message that it rewards hardworking cadre who adhere to the saffron ideology, unlike many opposition parties which reward personal loyalties and family connections. Murmu’s ascent—she is eight years younger than Modi—marks the saffron party’s focus on younger leadership.

Her nomination is part of the BJP’s engagement with marginalised communities, outside its core constituency of upper castes, which had in the past earned it the tag of being a Brahmin-Bania party. In 2017, the party had picked a sober, understated dalit politician, Ram Nath Kovind, to be president. During their first term, Modi and Amit Shah, who was then party chief, were wooing dalits aggressively as the party had appropriated the legacy of B.R. Ambedkar in a big way. The party also needed to consolidate its position in the Hindi heartland. Fresh from the victory in the Uttar Pradesh assembly elections in 2017, where dalits voted to give the BJP a huge majority, the party picked Kovind, who was from Kanpur. Uttar Pradesh had given the country nine prime ministers, but Kovind was the first president from the state.

Five year later, the BJP has shifted gears as it focuses on tribal outreach– commemorating the contribution of tribal icons, declaring November 15 as Janjatia Gaurav Divas to mark the birth anniversary of tribal hero Birsa Munda. Murmu’s “contributions to our nation are immense and she possesses a lot of expertise in different areas which will be of great benefit to our country. Her efforts towards the uplift of the marginalised sections of society are also widely celebrated,” said Nadda, as he announced her name after the meeting of the BJP parliamentary board, the highest decision-making body of the party.

There will be a contest for the top post as opposition parties have fielded former Union minister Yashwant Sinha as their joint candidate. Bureaucrat-turned politician Sinha had spent 22 years in the BJP, 12 years in the Janata Dal and a year in the Trinamool Congress. For the opposition parties, it is an ideological contest, as they do not want to give the ruling party a walkover. But in messaging, the saffron party has scored the first point. It rewarded a party cadre, and that, too, from the tribal community.

Warm welcome: Prime Minister Narendra Modi being welcomed by tribal dance artists at Khunti, Jharkhand, in the presence of Droupadi Murmu, who served as the state’s governor till July 2021.

Soft-spoken and accessible, Murmu belongs to the Santhal community, the third largest tribal community after the Gonds and Bhils. Her ancestral house is in Uparbeda village in Mayurbhanj district, which is famous for its colourful and energetic chhau dance. Her father, Biranchi Narayan Tudu, was a farmer; he gave his daughter a name which was unusual in the tribal community. It was an indicator of the Vaishnavite influence. “She always wanted to study. And she married on her own will; it was a love marriage,” said Murmu’s brother.

Murmu started her career as a junior assistant in the state secretariat. She later taught at the Aurobindo Integration Education centre in Rairangpur. Principal Indu Otta said Murmu was always quite cordial. “She used to teach us Santhali language, and sometimes would sing and explain the meaning as well. Her daughter, Itishree, studied here for some time. But she took her plunge into politics in 1997, after which she used to come only for our annual functions.” 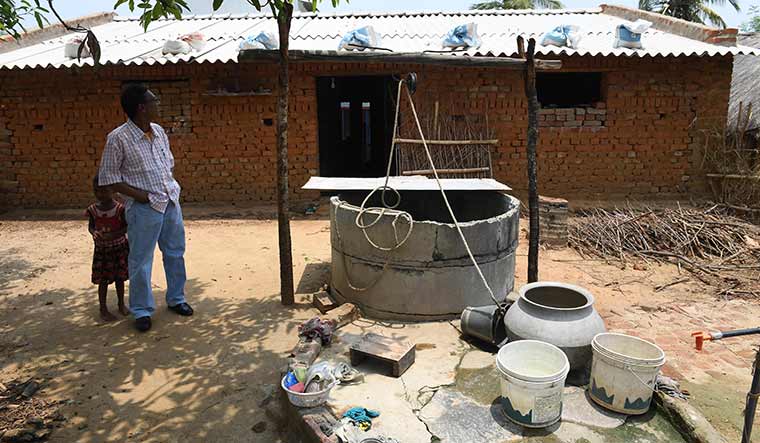 Murmu shifted gears after she she joined the BJP. She went on to win the Rairangpur municipal elections and became the local body’s vice chairperson. She was elected MLA in 2000, and was appointed minister in the Biju Janata Dal-BJP coalition government. A two-time MLA, Murmu later held various party positions in the state unit. In 2015, she was named governor of Jharkhand.

Called didi by her supporters and local people, Murmu’s rapid rise in politics was in stark contrast to the tragic upheavals she faced in her personal life. “After the death of her two sons, she lost her husband, too. She was quite distraught,” said Nabeen Ram, Odisha BJP secretary. “At that time, we had a training camp in Puri. She said she did not want to come. I convinced her to come as she was the district party chief. Ramlal ji [who was then the BJP’s organising general secretary] was there. He asked me to send him her bio data. Later, when the BJP made Raghubar Das the chief minister of Jharkhand, there was anger among the tribals. Murmu was then appointed governor as a message to the community.” Rairangpur MLA Naba Charan Manjhi said the period after losing her husband and sons was quite taxing for Murmu. “She wanted to leave the party and take sanyas. She had gone into depression,” he said. 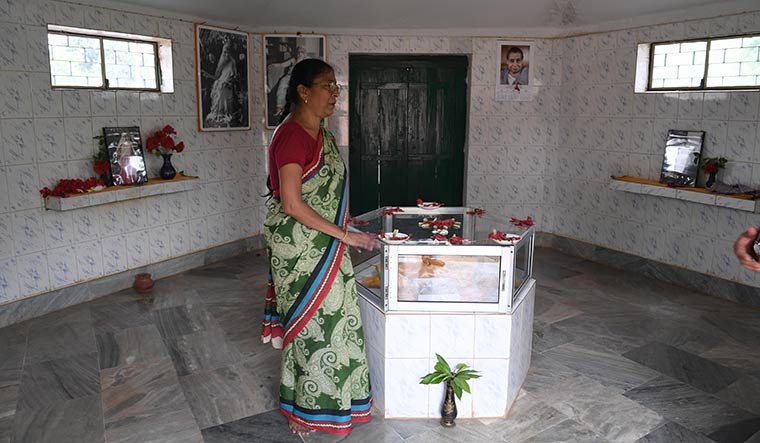 The series of tragedies, however, shaped her steely resolve. “After her first son’s death, she did not talk to anyone or eat properly for six months. There was a change once she started going to the Brahma Kumaris,” said Sukromani Tudu, Murmu’s sister-in-law. “The sisters at the meditation centre told her that the world was a stage and that the souls visited it only for some time.” The association with the Brahma Kumaris calmed her down considerably.

Murmu’s tribal origins and her overt invocation of Hindu religious figures make her an ideal choice for the BJP and its ideological fountainhead, the RSS, which have been working among the tribals to link them to the religious mainstream. A day after she was named presidential candidate, Murmu, who is a Krishna devotee and a Brahma Kumari disciple, visited three temples. 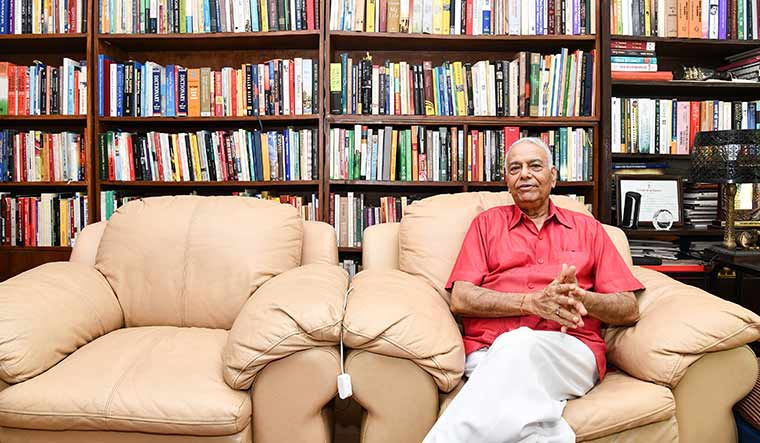 The BJP’s tribal outreach is reflected in the manner in which the party is banking on the community to increase its tally across the country. The Union cabinet currently has eight ministers from the Scheduled Tribe (ST) category, while the party has 190 MLAs, 36 Lok Sabha MPs, eight Rajya Sabha MPs, two governors, and two deputy chief ministers from the tribal community. A president will complete the picture. The party has been able to increase its reach among tribals in states like Madhya Pradesh, Chhattisgarh, Jharkhand, Bihar and Gujarat, although the tribals have traditionally supported the Congress. But owing to the RSS outreach, the BJP has been able to make sufficient inroads into the tribal areas, but not as much as it would like.

In the 2019 Lok Sabha polls, the BJP won 31 of 47 ST reserved seats, increasing its tally by four from 2014. In Madhya Pradesh, which has a 21 per cent tribal population—the highest in the country—the BJP was voted out of power in the 2018 assembly elections as it could win only 16 of 47 seats reserved for the STs; it had won 31 in 2013. In neighbouring Chhattisgarh, the Congress won 25 of 29 ST seats in 2019, which helped it form the government. In Jharkhand, where the BJP had won 11 of the 28 ST reserved seats in the 2014 assembly elections, its tally dropped to two in 2019, while the Jharkhand Mukti Morcha-Congress alliance won 25 seats, pushing the saffron party out of power.

In Gujarat, which has nearly 15 per cent tribal population, all parties are making a renewed effort to woo the tribal voters. The state goes to poll later this year, while Madhya Pradesh, Chhattisgarh and Rajasthan will have elections next year. In Odisha, the BJP has been for long eyeing an entry after the Naveen Patnaik era. Patnaik has already congratulated Murmu and assured her of his support. The BJP’s rise in the northeastern states is also attributed to the party’s tribal outreach.

While the BJP has put forth Murmu’s name, 17 opposition parties have unanimously chosen Sinha as their candidate. The name of the 84-year-old leader was finalised after Nationalist Congress Party leader Sharad Pawar and National Conference supremo Farooq Abdullah opted out of the race. Former diplomat and academic Gopalkrishna Gandhi, too, chose to stay away.

The suggestion to pick Sinha came from the Trinamool Congress, the party he had joined after quitting the BJP. While there are numerous qualities that make Sinha an ideal choice, he comes with the baggage of having been a BJP insider for long. He belonged to the A.B. Vajpayee-L.K. Advani era, and was sidelined when Modi took over. During the initial years of the first Modi government, he remained a dissenting voice within the BJP. While other veterans kept quiet over the leadership change in the party, Sinha decided to chart an independent course. His son was earlier a minister in the Modi government, and is still an MP representing the party.

“Sinha has been countering the Modi government about its anti-people policies. He had taken up the issue of corruption in the Rafale deal also,” said CPI(M) general secretary Sitaram Yechury. Trinamool general secretary Abhishek Banerjee said if the country wanted someone who could protect the Constitution as its next president, there was no better candidate than Sinha.

The opposition parties were hoping that Sinha’s BJP antecedents and his past assoiation with Bihar would help get the support of a few NDA members, like Chief Minister Nitish Kumar. But Nitish announced on June 22 that his party would support Murmu.

With the presidential election being the biggest face-off between the ruling dispensation and the opposition before the 2024 general elections, the anti-BJP bloc made an assertion in its joint statement that the new-found unity would be further consolidated in the months ahead. However, the pulls and pressures within the opposition camp were visible, starting with the insistence of the Congress and the left that Sinha needed to dissociate himself from the Trinamool before his name could be announced.

While the Aam Aadmi Party and the Telangana Rashtra Samithi pledged support to Sinha, they did not attend the opposition meeting and it was clear that they did not want to share the stage with the Congress. Since an effort had to be made to get on board parties that are not comfortable dealing with the Congress, the main opposition party sunk into a supporting role, letting leaders like Pawar and Mamata take the lead. And while ensuring Sinha’s victory will be an uphill task, what appears even more difficult is achieving the seemingly elusive goal of opposition unity.

With inputs from Soni Mishra

Became a teacher when her own children started school

Joined the BJP and was electeda councillor in 1997

Won the best legislator award in 2007

Grandchild: Itishree has a two-year-old daughter with her husband, Ganesh Chandra Hembram, a sportsperson