SSI's Mantra could bridge the disparity in access to robotic surgeries 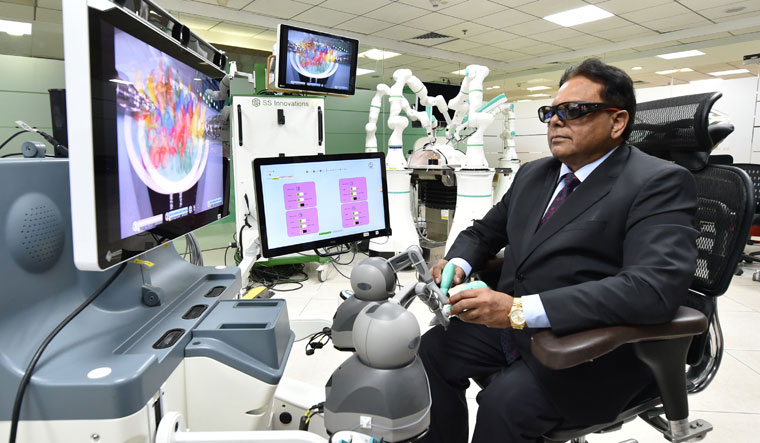 Dr Sudhir Srivastava has one vision: “Only a patient should be there in an operating room. Other functions can be carried out automatically.” This might sound like Covid-resonant remote working for the hospital staff, but the veteran medical professional has been advocating robotic cardiac surgery for more than a decade. At one point, he held the world record for conducting the most robotic cardiac surgeries (1,400). This year, he is ready to launch his multi-arm novel robotic assistant—‘Mantra’ Surgical Robotic System, developed by his Gurugram-based company, SS Innovations (SSI).

“When the pandemic struck last year, it led to a shutdown of elective surgeries for a while,” says Srivastava. “Health care tech was exempt from this lockdown and that allowed our team in India to focus and refine this medical technology. And finally, after three years in the making, we are ready to launch Mantra in the market in the next four months.” Srivastava moved to India in 2011 after years of practice in the US. In 2003, he and 10 other physicians had founded Alliance Hospital, a centre of excellence in cardiovascular disease in Texas.

Robot-assisted surgery marries advanced computer technology to the skill of a surgeon, who can now read 10x magnified, high-definition, 3D images of a patient's anatomy while manipulating smaller, more manoeuvrable surgical instruments from a console far away. The robotic arms simulate the hand movements of a surgeon, without the tremors, perspiration and subsequent anxiety.

A 2020 paper published in the Indian Journal of Urology summarises the entry and proliferation of robotic surgeries in India. The first robotic technology for medical purposes allowed entry into India was the US FDA-approved Da Vinci system in 2000. The first robotic cardiac surgery was conducted with this system in 2002, and the first urological surgery in 2006. “There are currently 66 centres and 71 robotic installations as of July 2019, with more than 500 trained robotic surgeons in our country,” the paper notes. “More than 12,800 surgeries have been performed with robotic assistance in these 12 years. The numbers are expected to increase as more robotic surgeons get trained and other surgical specialities increasingly utilise this platform.”

Though the Da Vinci system has long been the norm in India, there are competitors in the Indian market now offering next-gen surgical robotic systems with portable and modular designs. UK-based medical devices company CMR Surgical's Versius is being used in a number of hospitals including Galaxy Care Hospital in Pune, for minimal access procedures. Launched in 2018, it promises to be small and cost-effective.

Srivastava wants to make a difference by building a cheaper alternative to Da Vinci. Any robotic operation costs about Rs1.5 lakh more than normal surgery. The Da Vinci system costs between Rs6 crore and Rs15 crore. SSI's Mantra is in the Rs4 crore to Rs5 crore bracket. Additionally, Srivastava promises that the operation and maintenance cost would be one-third of the Da Vinci system. “Our system design is much different from Da Vinci,” he says. “There are four arms mounted on one central beam, unlike the big and bulky Da Vinci. And, in our system, the robot arms are all separate. It gives flexibility to use arms based on the procedure needs, a surgeon's experience and the complexity of the case.”

Srivastava has assembled a team of scientists and experts from Germany, the US and India in his 30,000sqft office in Gurugram to develop Mantra. “In the Da Vinci system, you are sitting and looking into a small box,” he says. “We operate large 3D monitors and open-face consoles, and surgeons get to sit straight with better ergonomics and vision, and better magnification and precision.” Srivastava has received 85 letters of intent from medical institutions in India. Mantra is set to create huge interest as they start exporting to 65 countries next year.

Sudhir Rawal, the busiest robotic surgeon in the country and director of Rajiv Gandhi Cancer Institute and Research Centre, has used the Mantra system to conduct some 18 complex operations, as part of human trials. “SSI's technology is as good as Da Vinci’s,” says Rawal. “They have more than 20 instruments. It is as versatile as Da Vinci, with only a few modifications required.” He believes robotification of surgeries is like piloting a plane; it can never be fully autonomous.

Srivastava has big plans for Mantra. “We have tested our robotic arm remotely using 5G, from some 30km away,” he says. “So, one of the things we are developing is telesurgery, where I can sit in Delhi and operate anywhere in the country through fibre optic network. We can sit here and patients can be in Mumbai, Chennai or anywhere. Smaller health care centres in rural areas will have access to big centres.”