COVID-induced automation in industries is a double-edged sword 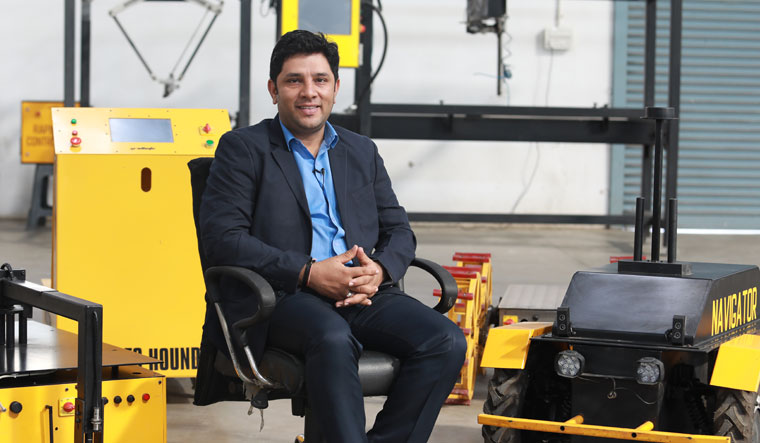 Beyond bounds: Pulkit Gaur of Gridbots, whose robots can go "where humans cannot"

Dirty, dangerous and dull. These three words have guided Pulkit Gaur's life's work ever since he set up Gridbots, one of India's first robotics companies, in 2007. “We are in places where humans cannot go,” says Gaur, on phone from the company’s head office in Ahmedabad. His robots go into foundries where metal scrap is melted in blast furnaces, with temperatures going up over 1,500 degrees Celsius. In 2011, he created submersible robots—SaUsR (smart automation underwater service robot)—for cleaning tanks at a nuclear facility, where humans are kept out because of the high radiation. This earned him a deal with Bhabha Atomic Research Centre. “I help them solve very difficult, dangerous problems,” says Gaur.

He was declared Innovator of the Year by the MIT Technology Review in 2011 and has also received a TED Fellowship in the US. A mechanical engineering graduate from Jodhpur, he has an enviable portfolio, with clients like the Union home ministry, National Institute of Design, Ahmedabad, Indian Navy, Oil and Natural Gas Corporation, ISRO, and the Gujarat Police. But the pandemic has seen him speed up work on the robo-labourer concept. And they do not deal with dirty, difficult and dangerous work like furnace tapping or radioactive waste.

“A robo-labourer will have arms, a camera and moving capabilities where it can replicate a human worker completely,” Gaur explains. “It can do repetitive actions non-stop.” It sounds a lot like the work undertaken by daily wagers employed in large industrial enterprises. All this while industrial automation entailed robotic arms for assembly-line work, which Gaur says cannot be categorised as a labourer. “It is a very complicated job. Not many companies in the world have been able to solve this,” says Gaur, about robo-labourers with advanced mobility. He cracks up when asked if the design will resemble a humanoid. “We are not making a movie. When you are working for an industry, no one really cares for appearances of robots,” he says.

Simple, repetitive actions like packing tubes and soaps in a box can now be done by a robo-labourer that is undergoing demos and tests in 10 companies around the globe. Gaur does not reveal the clients testing his new model. He insists he is not taking away any jobs, but then also goes on to add that one has to “change with the times and reskill”. He wants to dissociate the correlation of enough cheap labour with the absence of robots, using the reference point of China: “If they can do it, why can't we?”

Gaur believes the pandemic has necessitated a shift in thinking. “Initially, the mindset was not about investing the money upfront, as a robot would raise costs,” he says. “Now, after Covid, companies are being forced to invest because they are unable to find or retain people. Pharma and food sectors have especially been affected by this trend. They have immediate requirements. Many companies are now learning that they need to have a plan B. They cannot be dependent on human labour alone.”

If Gaur is competing with humans by making robo-labourers, yet another category of industrial robots is emerging—the cobots. Collaborative in nature, cobots work alongside humans, unlike industrial robots who replace those employees. Also, cobots are capable of “learning on the job” and, hence, are believed to be more easily programmable. Last August, the Union department of science of technology (DST) sanctioned Rs170 crore to IIT Delhi to build a technology innovation hub on collaborative robotics (cobotics). Over 50 faculty members from IIT Delhi, apart from other universities from Japan, South Korea, the US and the UK, are involved with the I-Hub Foundation for Cobotics (IHFC) at IIT Delhi. Two of their robotic applications are already at use at the All India Institute of Medical Science in New Delhi and the Post Graduate Institute Chandigarh.

“Cobots like the one we have developed are already operational and adding value in manufacturing and warehousing lines, along with huge potential in health care and hospitality,” says Subir Kumar Saha, board member of IHFC and one of the top roboticists in India. “The goal of cobots has always been to empower humans and drive their productivity, rather than replace them. The future lies in human-robot collaboration and we are developing mobile robots that can learn from operators or material movers.”