Doozy, the bot, nearly campaigned for a party in TN elections 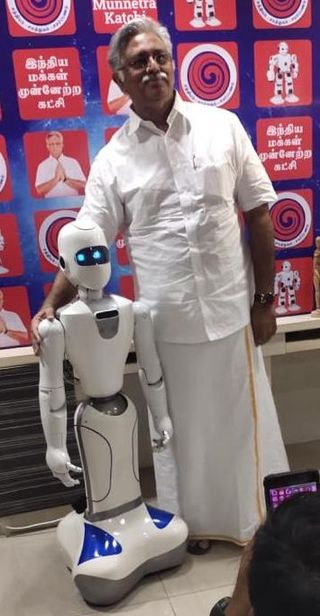 The IMMK, a political party in Tamil Nadu, had unveiled a robot as its symbol in the run-up to the assembly polls. Party president Ra Arjunamurthy seen above with a Doozy humanoid.

The dictionary definition of ‘doozy’ is ‘something unique and outstanding’. With this in mind, Chennai-based Suresh Chandrasekar adopted the word as the name for his two-year-old consumer robotics company and its range of humanoids. In the run-up to the Tamil Nadu assembly elections this year, India Makkal Munnetra Katchi (IMMK) unveiled a robot as its symbol. And, Doozy was commissioned to speed-deliver 50 humanoid robots in time for the campaign. When the party opted out of the elections in March, Chandrasekar must have let out a sigh of relief.

“The party planned everything at the last moment. They expected us to deliver 50 robots in a week!” Chandrasekar says. “I am making the most advanced robot in Asia. I have been developing it for three years. Some of the parts are imported from Australia and the US. And they think it can be produced like any product? They do not understand the depth of the technology,” says Chandrasekar, in whose imagination Doozy is an emotionally intelligent 13-year-old boy. “It can identify your voice, understand human emotions, it has more than 16 degrees of movement, it can dance and sing, too. And its display eyes view humans to create curiosity, like someone is really watching you.”

The four-foot tall Doozy costs 08.5 lakh and can speak Hindi, English, Tamil and Chinese. It wants to work as a sales assistant in retail, a teacher's sidekick in schools and a health care companion in hospitals. Chandrasekar is soon going to deploy his humanoids in a hospital in Kerala, engineering colleges in Tamil Nadu and a government museum in Madhya Pradesh. “But what I am really interested in is robots in education,” he says. “I want to create curiosity among school students. And instill hope and ambition that they can also produce new technology.” He categorically points out that Doozy is not meant for political posturing.

A software developer who completed his MBA in 2005, Chandrasekar started Doozy Robotics in early 2019 with Ajmal Thahseen. That same year, they participated in the Singapore FinTech Festival (SFF), and that is when he realised that Chinese companies will rule the world in robotics in the coming years with their manufacturing capabilities. With no technical background in robotics, how does he plan to create revolutionary automatons from India? “That is the beauty of things,” he says. “That is why I have managed to create an emotionally intelligent robot. Technical minds are always thinking about logic. I get people who do not have experience in robotics. They are the right people for my company.”