The practical challenges of automating border security and warfare 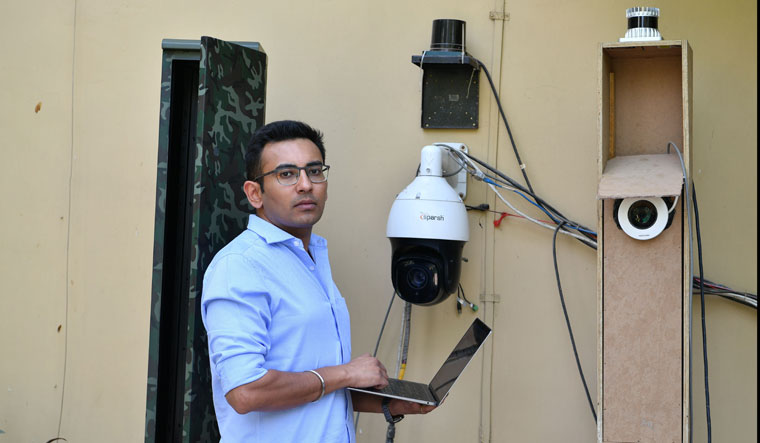 Eye on the enemy: Tushar Chhabra, CEO and founder, Cron AI, seen with some of his gadgets | Arvind Jain

Assam Rifles once gave Tushar Chhabra a trophy in 2018, just for “attempting” to set up an advanced AI-enabled installation to detect and prevent intrusions on a stretch along the India-Myanmar border. “It is a very dangerous border,” says Chhabra, 29. “Smuggling is big—drugs, animals, weapons, you name it. There are snakes and millions of leeches. There is a good deal of waterlogging. Power or battery backup is not available. And it is too humid, so no sensing technology can work there.” His six-year-old deep tech company, Cron AI, has worked with the Indian Army, the BSF and the Sashastra Seema Bal to install equipment for scanning and threat perception at the borders.

When he was 21, he worked on a drone that was showcased at the Fort Worth Convention Centre, Texas, by Lockheed Martin. In 2015, Chhabra founded a company for analytics-driven political consulting and strategy called Chanakya Neeti, and counted Twitter and two national parties as clients. Easily bored, he left it to build Cron AI. The gleaming, golden trophy from Assam Rifles for this unsuccessful bid is displayed at his workstation in a South Delhi office, from where Chhabra holds forth on “robo-soldiers” and the AI advantage in defence and perimeter security.

His company has developed a platform called senseEDGE, which enables advanced 3D perception processing using lidar and radar—in essence, smart sensors which capture and process raw data into easily intelligible information. “Whatever you do, the Army does not have the time to use all these sophisticated technologies,” Chhabra says. “Most of these systems will be used by people who are not officers. And they want a simple output: where is the intruder coming from; what exactly is coming, the speed; is the object crouching, walking or running? We are just making these things simpler for them to read.” A monitor feeding output from senseEDGE shows a dark screen scribbled with fluorescent lines, three dots are squirrelling around: red is for human intruder, green for animal and grey for go figure. A little exasperated and a touch amused, he throws up his hands in the air to finally say, “Look, there are no robo-soldiers,” before flicking on his laptop screen to show images of a military robot from Israel, which looks like an autonomous fire extinguisher with arms as weapons. “The BSF cannot afford this,” he concludes.

In August 2020, a senior lieutenant general was reported to have undertaken a “holistic study” on futuristic warfare technologies. Niche, disruptive warfare machinery would include AI, remotely-piloted aerial systems, drone swarms, big data analysis, block-chain technology, algorithmic warfare, Internet-of-Things, virtual reality, augmented reality, hypersonic-enabled long-range precision firing systems, liquid armour, and smart ammunitions, among other things, reported a national daily. A year before that, Bharat Electronics Limited’s Central Research Laboratory was reported to be working on a prototype of a “first responder robot” which can patrol the borders, much like the unmanned armoured car, Guardium, patrolling the line between Israel and Gaza. DRDO scientists are believed to be working on Daksh, an electrically powered remotely operated vehicle (ROV) that can detect landmines and defuse bombs. But these ongoing experiments are still in the labs. 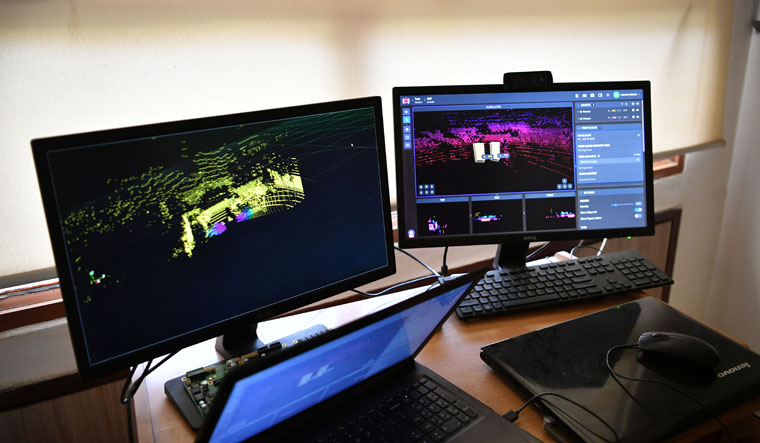 Chhabra's experience at the LoC has been a sobering reminder of the practical challenges involved in deploying robots on the border. He was at the LoC with his team of four to show how his 3D sensing hardware works. He left his car 20km away from the border and walked with the gear—180kg, divided between five people. Chhabra was not ready for the continuous climbing. The team was half-dead and cramped by the time they reached the border, and the deafening roar of shells and mortar did not help. “My team resigned as soon as we returned to Delhi,” he says. "When the CEO goes, people will come. Otherwise, who will go for trials?”

Chhabra spent the foundational six months at Cron at hostile Indian borders trying to understand why one of the most elite armies in the world was relying on artillery and manpower rather than deploying 3D sensors that could act as the first line of defence. “When something dropped right in front of us and did not explode, that is the moment I realised how pathetic life can get at any moment,” says Chhabra, who now relies mostly on integrators, distributors and solution providers to sell his chipset to the Army. With senseEDGE, Chhabra has managed to secure a small part of the LoC, but will not reveal the distance covered. Most of the contracts have non-disclosure agreements. “I make a software and it is really important for the Army to have it,” he says.