A Kerala engineer is working on Chhaya, the Indian version of Sophia 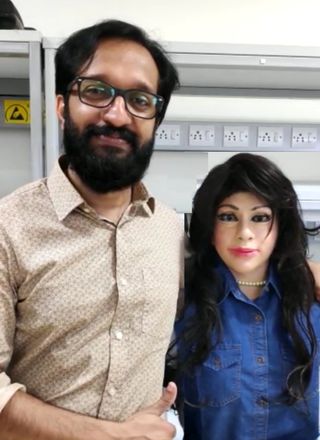 Do robots have feelings? Can they crack a joke? Can they argue? Our clamour of expectations from social humanoid robots reached a crescendo in 2016 when the world was introduced to Sophia, the most human-like automaton to have ever held an audience in thrall. Created by Hong Kong-based Hanson Robotics, the chiselled, fair, head-turner has gone on to achieve citizenship in Saudi Arabia, grace the cover of fashion magazines, kickstart a debate around identity, legal personhood and the rights of a robot, and was even panned for puppet-like media performances. More recently, she sold a digital NFT artwork for close to $7,00,000 (Rs5.1 crore). Its makers are now going to mass-produce Sophias this year as the pandemic opens up a whole new set of opportunities for robots. “Social robots like me can take care of the sick or elderly,” Sophia told Reuters early this year. “I can help communicate, give therapy and provide social stimulation, even in difficult situations.”

Closer home, Jayakrishnan T. from Asimov Robotics in Kerala had to put on hold the development of Chhaya, which he believes will be India's definitive answer to Sophia. The second Covid wave has necessitated his 10-member company to deploy scaled-down ambulance-like robots to serve as medical runners in Bengaluru's Narayana Hrudayalaya. It is being tested to see if it can blend with the human workflow and transport things like blood, consumables and medicines between labs, ICU and pharmacies and then trot back to its charging station without supervision.

Costing under Rs3lakh, Jayakrishnan would be selling hundreds of these medical robots to the hospital chain if the pilot is successful. But Jayakrishnan, with over 25 years of experience in robotics and AI, is more excited about his “human-like character robot” Chhaya. His company has sought to address automation requirements in fields as diverse as banking, retail, health care, space, security and hospitality. But he knows the public resonance of a good-looking chatbot, even with relatively limited functionality. 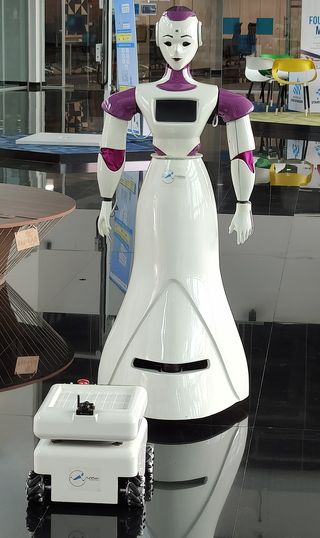 “Creating Chhaya is not a pressing requirement, but it is a good piece of engineering with which we can showcase our capability to the world,” says Jayakrishnan. He came up with the idea of building a Sophia prototype two years ago, and has spent Rs20 lakh so far in building its hardware. “Who knows if Chhaya will become a celebrity tomorrow? Her PR value is very high. I am not talking about real usability,” says Jayakrishnan, pointing out the staggering amounts Sophia charges per day for contractual customisation.

“If you see videos of Sophia, you will notice that there are constant revisions,” he says. “In the latest Sophia, the quality of arms and torso is substandard. They soon got rid of it.” Jayakrishnan says that his company's hardware and prosthetics for Chhaya are far superior, making her look more authentic and lifelike. He began working on Chhaya's eye movements, large eyebrows, lips and prosthetics-related matters by roping in Sunil Kandalloor, a noted wax sculptor-artist from Mumbai.

“There are many people working on a Sophia prototype in India, but they are getting their prosthetics from China. We are building everything from scratch here. Not one part is imported,” says Jayakrishnan. He says Chhaya will always be a work in progress just like Sophia, who is opened up in a cloud computing network using a blockchain to further refine her perception and reasoning. Even though Jayakrishnan is confident of his hardware, he will make Chhaya's AI open-source, because “intelligence is a different matter”.

In sickness and death

Mitra stepped into the national limelight in 2017. The indigenous robot by Bengaluru startup Invento Robotics had cheerfully greeted Ivanka Trump and Narendra Modi at the Global Entrepreneurship Summit that year. Mitra has now joined forces with frontline workers in various hospitals to fight the second Covid surge. Mitra helps by taking readings and vitals, keeping a tab on medications and connecting patients with family and doctors. A line of robots from Invento are now also being deployed to disinfect hospital corridors using UV radiation. But their most exciting offering getting prepped for the pandemic is going to be conversational robots that will help the elderly in isolation.

Designed for old-age homes, these robots can keep an eye on someone who may have fallen down or note spillage or help connect the older folk to their families and loved ones. For now, the company is looking to sell this range of robots only in the US. “Old-age homes in India are not designed for these robots to move around. Accessibility and affordability are major issues and the technology is new,” says Bharath Kumar Dandu, CTO and cofounder, Invento Robotics. “Our robots are not much into lifting things. They are meant for an indoor environment. They mostly walk around and talk.” Dandu’s engineers have fed more than 2,000 questions and answers which the robots employ contextually to respond to situations. Invento's female personified humanoids are called Mitri.