Meet the entrepreneurs redefining our culinary future, bot by bot 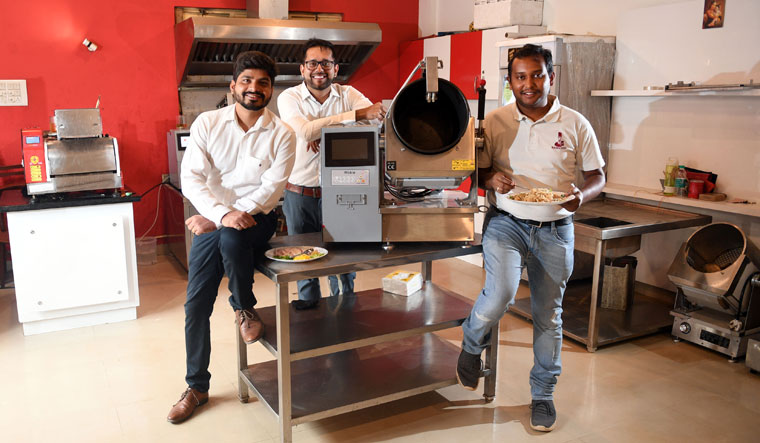 Cohan Sujay Carlos knows that many home robotics companies in India have gone bust. “Most investors and venture capitalists do not want to go there. And they are afraid of China, who will always beat us to it,” says Carlos, a Bengaluru-based entrepreneur, who was a machine learning researcher at Microsoft. Since 2017, he has been trying to develop the most efficient and cheapest cooking robot through his company, Mechanical Chef. Five iterations later, he has finally arrived at a single-burner cooking machine that cost him Rs1 lakh to build. It was only in 2020 that investors started sending feelers. And even though Mechanical Chef continues to be self-funded, Carlos took the plunge this year and formally launched his cooking bot.

“Indian food is very special. It lends itself to automation in a way no other food can,” says Carlos. “It is rich in spices and the items do not require much shaping. All masalas are powders; you can deal with that in machines.” Mechanical Chef works like a tape recorder for food in the way that it precisely copies cooking steps, timing and portions of ingredients. So far, Carlos has recorded and transcribed 150 dishes into the bot. “Human history has gone through the industrial revolution and then the IT revolution. How much of it has percolated into our kitchens?” he asks.

To be fair, our kitchens have embraced modernity in many forms. Mixer-grinder-blenders, toasters, baking ovens, OTGs and dishwashers aside, we have also witnessed the advent of the automatic roti-maker. It took a pandemic to unleash the world's first robot kitchen which “cooks from scratch and even cleans up afterwards without complaint”. Brainchild of a Russian mathematician and computer scientist, the Moley Kitchen robot can whip up close to 5,000 dishes at the touch of a button. While Indian kitchens are not quite ready for such a sophisticated robotic invasion, the pandemic-induced concerns about hygiene is powering a growing demand for cooking automatons.

On the face of it, Julia looks like a sophisticated sewing machine. But she might just be the smartest kitchen robot that slackers and multitaskers have been praying for. Armed with chambers for vegetables, masala pods, an in-built stirrer, thermal cameras and multiple sensors, she is capable of producing some 30 Indian recipes programmed by a team of 100 chefs. Created by Bengaluru-based consumer electronic start-up Nymble, Julia has been built to get busy people to put "home cooking on auto-pilot". Using AI and machine learning, the robot will adjust itself to taste preferences, the makers say. Cofounder Raghav Gupta assures there are no gender-based assumptions with the name. “Our cooking robot is called Julia now, but we allow users to choose male and female voices, just like Alexa,” says Gupta. Bengaluru has seen the highest adoption of cooking and cleaning robots since the onset of the pandemic, according to him.

Nymble has been supported by the government of Karnataka, by the Binny Bansal-backed 021 Capital, and WaterBridge Ventures. “An educated migrant population, with a wider workforce participation of women, is a driving factor for cooking robots,” says Gupta. “But especially after Covid, there is a growing percentage of people who do not want other people entering their house, people who want greater privacy and control over their time with cooks.” Gupta is confident that the time for autonomous stovetop cooking has arrived. He has been actively conducting demos with Bengaluru residents; Juila takes over their kitchen for seven days and rustles up everything from mutton curry to rasam and vangi bhath (brinjal rice). “We now have a thousand more people on the waitlist who want to try our bots,” says Gupta. “Soon, we will do trials in the San Francisco Bay area where the market is already exposed to cooking bots like Oliver, employment of women is higher and there is a definite lack of cheap labour,” says Gupta, who is all too aware that the Indian market lacks these variables. 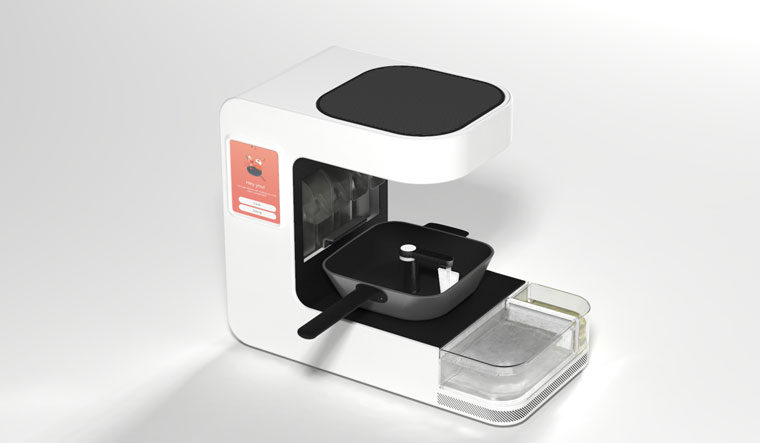 Armed with chambers for vegetables, masala pods, an in-built stirrer... Julia is capable of producing some 30 Indian recipes programmed by a team of 100 chefs.

While Julia is more inclined towards cooking upma and noodles at home, seven-year-old Mukunda Foods has come to the rescue of fast-food restaurants, commercial kitchens and cloud brands at a time when migrant labourers attached to these dining spaces have not returned from their hometowns. “It has been a crazy expansion for us in the pandemic,” says Eshwar Vikas, cofounder of Mukunda Foods. “We were a company of 30 people, but expanded to 120 during the pandemic. We opened a new manufacturing plant. When the lockdown lifted and the restaurateurs did not have the required manpower, that is when they started looking towards automation.”

Mukunda Foods was in the news in 2014 for creating Dosamatic, which could churn the perfect dosas without human help. Now, Mukunda has amped up its offerings in automatic cooking machines, including robotic fryers and contraptions that toss up wok-based Asian and Chinese fare. They say they have deployed 3,000 of their machines in 27 countries, including in global fast-food brands in the US. The bulk of their clients are still in India, though. Their machines cost between Rs30,000 to Rs2lakh, with their showstopper Wokie capable of churning out 1,000 recipes.

“Robots today should be a chef's best friend; they should not take away jobs. In fact, they help create jobs. We have created 4,000-5,000 jobs because of kitchen automation,” says Vikas, who believes restaurant owners previously afraid of expanding to other cities can do so unhesitatingly with automatic machines at their disposal. In the next two quarters, Vikas's company will be launching some 50-100 automatic vending machines for biryanis and pastas across Bengaluru. “Our machines are accurate,” he says. “It remembers the taste, maintains temperature and can add ingredients accurately. A machine never has mood swings and lethargy. It does not take a day off. It can run 24x7.”