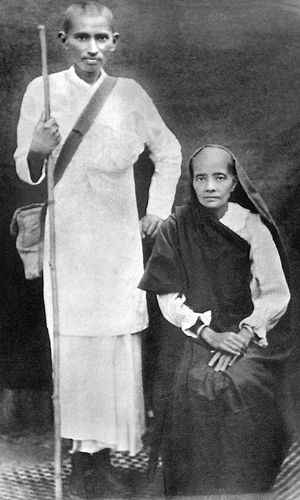 Unusual relation: Gandhi with his wife, Kasturba, in South Africa in 1913 | Dinodia

While studying in England, the young Gandhi joined the London Vegetarian Society, which was largely funded by an ironworks owner, Arnold Hills, who held extreme views on sexual intercourse.

In his Essays on Vegetarianism, Hills argued that one should refrain from sex to preserve the “vital force” and that sex could be permitted only for procreation. He also proposed that celibacy should be maintained even after marriage.

In 1906, Gandhi took the vow to practise celibacy. “I had not shared my thoughts with my wife until then, but only consulted her at the time of taking the vow. She had no objection.... Before the vow, I had been open to being overcome by temptation at any moment. Now the vow was a sure shield against temptation,” he wrote in his autobiography.

Soon he started urging others to follow suit. In December 1907, he wrote in Indian Opinion: “Adultery does not consist merely in sexual intercourse with another man’s wife. Sexual intercourse is justified only when it is the result of a desire for offspring.... It is the duty of every thoughtful Indian not to marry. In case he is helpless in regard to marriage, he should abstain from sexual intercourse with his wife.”

Celibacy was one of the 11 vows taken by his ashram inmates, even married couples. On a number of occasions, he forbade his disciples to marry. He urged Sucheta Kripalani, the future chief minister, not to marry his close aide J.B. Kripalani and divert him from freedom struggle. Sucheta agreed to call off the marriage, but when Gandhi asked her to marry someone else, she refused. Finally, Gandhi had to allow the two lovers to marry. According to the book Gandhi and the Stoics, the couple lived “as two friends and had no family”.

Gandhian lawyer Brajkishore Prasad’s daughter Prabhavati took the oath of celibacy when she became an inmate of Sabarmati Ashram, soon after her marriage in October 1920 to Jayaprakash Narayan. In 1922, JP went to the US for higher studies. JP’s co-biographer Allan Scarfe writes in his book J.P., His Biography: “Young and immature, married by ceremony but without marriage’s consummation, and in the absence of a husband’s influence, Prabhavati was completely overawed and dominated by Gandhi’s personality. Like the other disciples, she undertook the vow of celibacy.” JP came back to India in 1929. He respected his wife’s decision to observe celibacy.

Jawaharlal Nehru considered Gandhi’s experiments with celibacy “abnormal and unnatural”. “For my part I think Gandhiji is absolutely wrong in this matter,” he wrote in his autobiography. “His advice may fit in some cases, but as a general policy it can only lead to frustration, inhibition, neurosis, and all manner of physical and nervous ills... I do not know why he is obsessed by this problem of sex.”