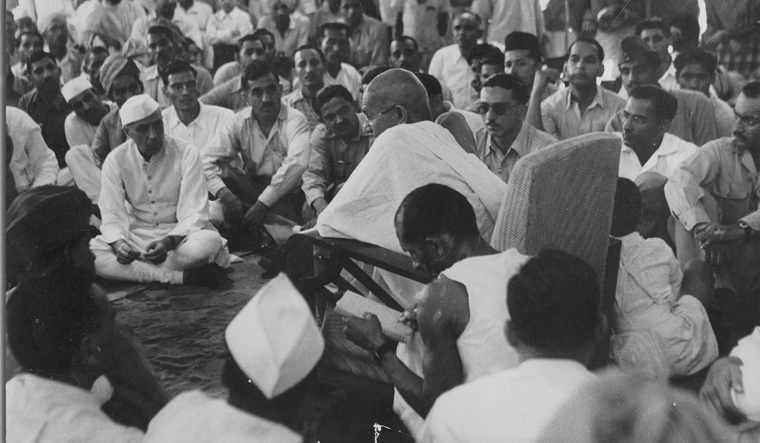 Mahatma Gandhi addressing the members of the Indian National Army

Gandhi's philosophy and work has to be understood as 'tatva' and 'tantra'. The tatva remains—the essence of truth and non-violence remains in the society. Gandhi talking about peace and harmony is tatva which is applicable in the computer age as well.

The question is not whether Gandhi is relevant or not, the question is are we will still able to relate to Gandhi. Gandhi stands as a reference point. Gandhi says that he has never said anything new. This tatva has remained with humanity and will remain. Gandhi does not take up arms. He makes a statement that you are unjust and that is a takeaway. He upholds truth and non-violence.

Even as we celebrate Gandhi's 150 years, let us not presume that his philosophy is not there. It will remain. The tantra may differ. Khadi is tantra. The believers of Gandhian philosophy may or may not wear khadi.

Gandhi demonstrated that things start from self. We have to become practitioners of whatever you know of Gandhi. There are so many things that he did. A simple practice can be to give work to one's hands. It gives you exercise, it saves water and you clean your neighbourhood. What is Swachh Bharat Abhiyan? It means to involve yourself. Using a public transport is very much Gandhian. Walking up to a distance of less than two kilometres is also very much Gandhian.

Gandhi had an important role to play in education. In the first five years of returning to India, he set up the Gujarat Vidyapeeth. He had a complete concept and hence Gujarat Vidyapeeth was catered to students from kindergarten to PG. It was not a centre of higher education. It was about educating the next generation, preparing the citizens for research and philosophy. Gandhi wanted to train volunteers for India's independence and be constructive workers.

The Gujarat Vidyapeeth created self employable workers. It functioned as per the original ideas until 1963 when the University Grants Commission stepped in and it almost became a mainstream university. It is a deemed university. The original values have remained—working for others, caring for others.

Students of the Gujarat Vidyapeeth have a niche place in the civil society organisations and when it comes to government jobs, if they have cleared the examinations and everything is equal then they are preferred as government employees for their better values. This is the strength that is left.

This educational institute should again evolve and go back to the basis. The tantra would be different, having modern technology but the tatva will remain same. It will be about building strength in students so that they form a new society. A society where there is no forced urbanisation. “Push out” has to stop.

For me, Gandhi was a person true to self and practised his conviction.


(As told to Nandini Oza)