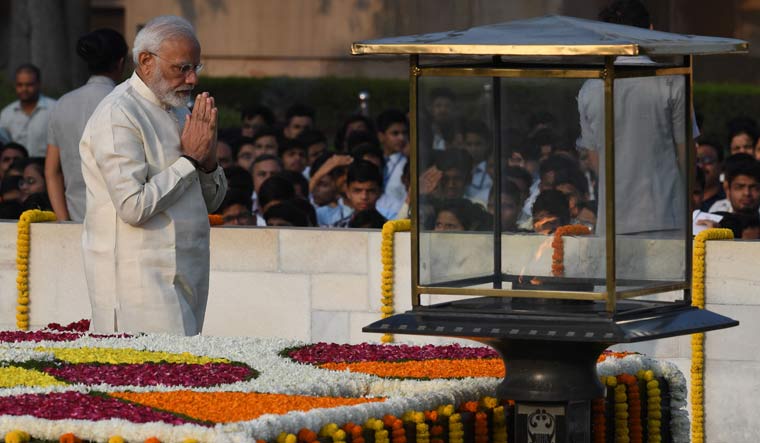 Prime Minister Narendra Modi on Wednesday paid homage to Mahatma Gandhi at Rajghat on the occasion of his 150th birth anniversary.

“Tributes to beloved Bapu! On #Gandhi150, we express gratitude to Mahatma Gandhi for his everlasting contribution to humanity. We pledge to continue working hard to realise his dreams and create a better planet,” PM Modi tweeted.

Several events have been organised around the country to mark the sesquicentennial year of Gandhi's birth anniversary.

Modi, who launched the Swachh Bharat campaign in 2014, is expected to arrive at Sabarmati Ashram in Ahmedabad in the evening and will declare the country open defecation-free.

Congress leaders are organising 'padayatras' across the country, with Rahul Gandhi joining the foot march in New Delhi. The party has planned a week-long program that will mark the culmination of the year-long celebrations commemorating Mahatma Gandhi's memory.

The celebrations are turning out to be a game of one-upmanship between the Congress and the BJP as both are organising foot marches across the country in their bid to cash in on his legacy.