Only positives in this film may be production design, music 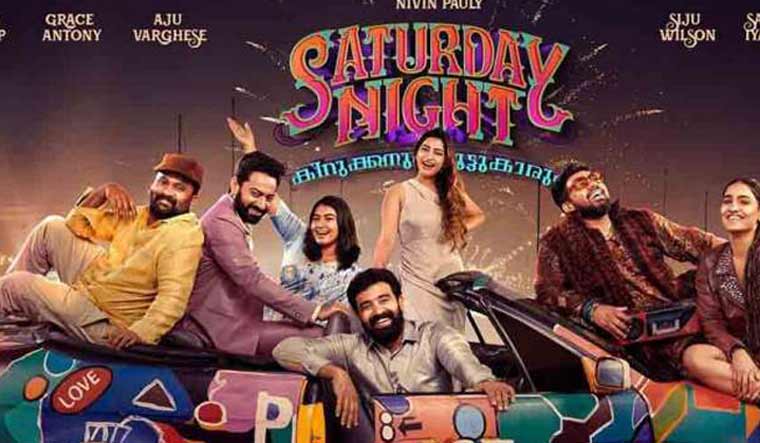 WTF! This expression is used multiple times—as an acronym for Wednesday, Thursday, and Friday—in the latest Rosshan Andrrews film Saturday Night with 'Kirukkanum Koottukarum'. This reviewer also used the expression multiple times while watching this cringe-worthy film starring Nivin Pauly, Siju Wilson, Saiju Kurup and Aju Varghese. The trailer and ads tried to project Saturday Night as a film that offers “fun and entertainment”. The film offered neither fun nor entertainment.

What it offered was an unbearable show from four middle-aged men, doing some nonsensical stuff and trying hard to be “cool”, just because they agreed to be the lead characters in this soup!

Saturday Night tells the story of four grownups, their troubles, and their so-called “friendship” (In the name of friendship, they harm each other’s personal and professional lives—sounds "fun", right?). Nivin Pauly’s character Stanley is the Kirukkan (madman) mentioned in the film’s extended title. Stanley, who is undergoing a deaddiction programme, is stuck in past. Pauly presents this character as a Bohemian, who wears loose floral harem pants and kurtas. Stanley talks in an irritating accent—hmm, that is what he does to appear “cool” and “free”—and does a lot of pukeworthy stunts. Pauly’s previous film with Andrrews was Kayamkulam Kochunni—another film in which he was miscast. But, when compared with Stanley, Kochunni was a tolerable character.

There are some women characters also in the film. None of these characters got any depth. Saniya Iyyapan’s character, Vaishnavi, got the maximum screen space among them. Interestingly, the filmmaker keeps the audience in dark about who she is, for far too long.

Some would say certain films can be enjoyed if you keep your logic and brain outside the theatre. Even if one does that and goes to the theatre with a hollow brain, this reviewer doubts whether this piece of work would provide any kind of enjoyment or “fun”.

Naveen Bhaskar is a scriptwriter who had worked in the scripting department of some decent films in the past. But what he offered for Saturday Night is nothing but a trash script with a loose plot.

But, it is not the scriptwriter, but the director of Saturday Night who is primarily responsible for the terrible Friday forenoon session this reviewer experienced. The only positives in this film may be the production design by Anees Nadodi and the music by Jakes Bejoy. Otherwise, all it could offer were yawns and sighs of frustration.