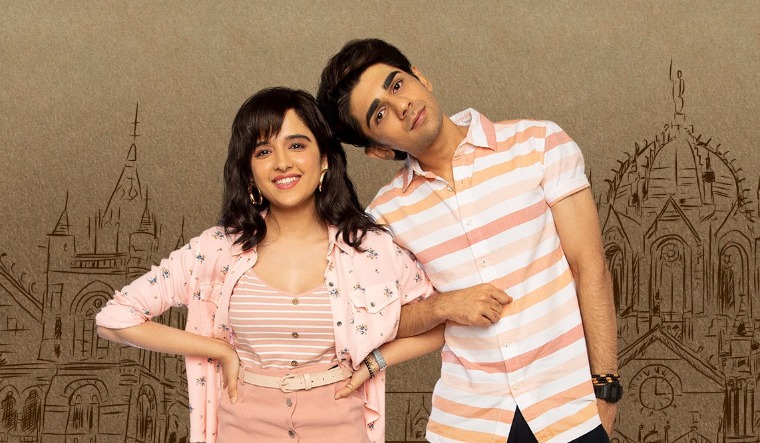 The pull of glamour, fame and the aspirations to achieve the unattainable could sometimes become so strong that to pay a huge financial and emotional price for it may seem nothing. Netflix’s latest release, Maska, puts a confused young millennial in the centre of a story that explores his dreams, an aspiration of becoming an actor that he struggles with and the eventual difficulties that he faces to realise them even when he is ready to part with his family's legacy.

Raised by a single mother (Diana Rustom Irai, played eloquently by Manisha Koirala), Rumi (Prit Kamani) is under the immense pressure of living up to the example set by his father. He may have passed away early, but did his best to carry on the family name and its legacy created by the ancestral Iranian restaurant, Rustom Café. Everyone swears by its authenticity.

Diana has run the café successfully for years after her husband’s passing, just in the hope that her son will grow up to take charge of the family business. She is one of those mothers who imposes and expects a lot, wanting the son to fit into his father’s shoes, literally and figuratively, perfectly.

Rumi finds his father’s shoes old-fashioned and is reluctant to try them on. It's overbearing for him to have that constant pressure of fitting into the ideas that have carried on for generations in the family. He has newer choices and other dreams, like becoming an actor, causing much distress to the mother who wants to retire at the earliest, with old-age health issues knocking on her door.

But Rumi is insistent. May be Diana could have convinced him in a scenario where there was no other influence. But to make things worse, Rumi has fallen for a strong-headed, aspirational north-Indian girl, Mallika (Nikita Dutta), who, too, is struggling to make it big as an actor. While Rumi struggles to act, she excels in every part that comes her way, which not just works as a motivation for Rumi, but her influence also overpowers him. It's enough to push him to leave the comforts of his privileged life and venture into the unknown by renting a house to follow a passion he is only partially good at.

Through the twin life of Rumi, the film presents two contrasting pictures of Mumbai—that of the endearing Parsi culture against the setting of an Iranian café, and another of the young, mostly migrants, who come to the city to fulfil their dreams of being a part of the razzmatazz of the entertainment world. Every lane, by-lane, hutment, slum, high-rise, row house in Mumbai is a treasure-trove of interesting stories that intersect in amusing ways.

In one of its earliest original films, Love Per Square Foot, Netflix explored the housing issue in Mumbai through the constant trouble faced by two young people to own a house of their own, and got it on point. But Maska, even if it is entertaining on the surface, lacks the depth of LPSF or many other slice-of-life films. It often leaves the emotions unattended or partly explored.

In a film propelled by its characters and their motivations, Maska is reluctant to take defined stands. The hesitance of writer-director Neeraj Udhwani in creating characters that could go into a grey area to keep the overall essence of the film feel-good, even when a few characters scream to have a better arc, is a let-down.

Udhwani, who is debuting as a director with this and has writing credits in films including Dil Toh Bachaa Hai Ji and digital series Inside Edge, among others, seems too conscious to take a plunge and explore human emotions and its dichotomies to its fullest. The result is a one-note film that refuses to get into the emotional depth that could have become the film’s strength. The film also strictly sticks to conservatism by almost becoming preachy about ideas of sticking to your roots and traditional values, continuing the lineage and so on.

Then there are those clichéd plot points. There is the dead parent (the father played by Javed Jaffery) who keeps reappearing to invoke some sense in to Rumi. It’s a clever idea to introduce it, but much done, especially in films about young people like Jaane Tu Ya Jaane Na, for it to look innovative. Also, there is little effort to make it look fresh. Then, there’s the other girl, who is more balanced and realistic. Played by Shirley Setia, Persis is a level-headed, aware-of-her-reality-and-dreams person. But to pit her opposite Dutta’s Mallika seems like a contrived idea, again creating a clichéd plot-point of good versus bad.