Shylock review: Mammootty pulls off yet another mass avatar in style 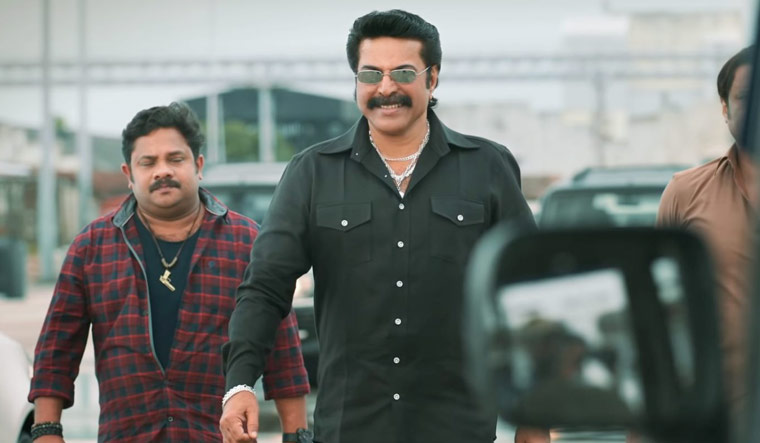 A still from the film Shylock | via Shylock official FB page

Mammootty-starrer Rajamanikyam, which was released in 2005, was one of the biggest hits in Malayalam cinema. The veteran actor, who was mostly known for his method acting and fiery larger-than-life characters till then, made heads turn as 'Bellary Raja' in the film, showing great comic timing and perfect Thiruvananthapuram slang, along with mass appeal.

'Bellary Raja' continues to be one of the iconic mass hero characters in Malayalam cinema. With Shylock, director Ajai Vasudev tries to create another mass avatar out of Mammootty.

Shylock is a treat for the Mammootty fans who adore his mass avatars, but the storyline is cliché. Boss (Mammootty) is a ruthless moneylender and locks horns with producer Prathapa Varma (Kalabhavan Shajon). How the moneylender exacts revenge from his enemies, forms the plot.

It's Mammootty's third film with Ajai Vasudev, after Rajadhiraja and Masterpiece. The superstar's stylish appearance and mannerism, and his punch dialogues, create a mass aura around the 'Boss' character. Jointly scripted by newcomers Aneesh Hameed and Bibin Mohan, Shylock has comedy, thrills and the revenge elements in it, but the mix isn't perfect. One also wishes they would have come up with more original one-liners for Boss, along with a less-cliched storyline.

While the first half is filled with punch dialogues and mass scenes, the second half of the film focuses on the back story and ends as a revenge drama. The latter half, in fact, restricts the flow of the film as emotions take centre-stage and the pace and energy of the film drop.

The action sequences choreographed by Anl Arasu are a visual treat. Mammootty impresses with his punches and kicks, with Gopi Sundar's brilliant background score to boot.

The veteran actor has delivered an electrifying performance in Shylock, which also marks his first on-screen collaboration with popular Tamil actor Rajkiran. Meena, the popular South Indian actress, too makes a comeback after two years. Shajon, Siddique, Baiju Santhosh, John Vijay, Hareesh Kanaran and others have done justice to their roles.

Shylock has also been released in Tamil as Kuberan with the same cast.