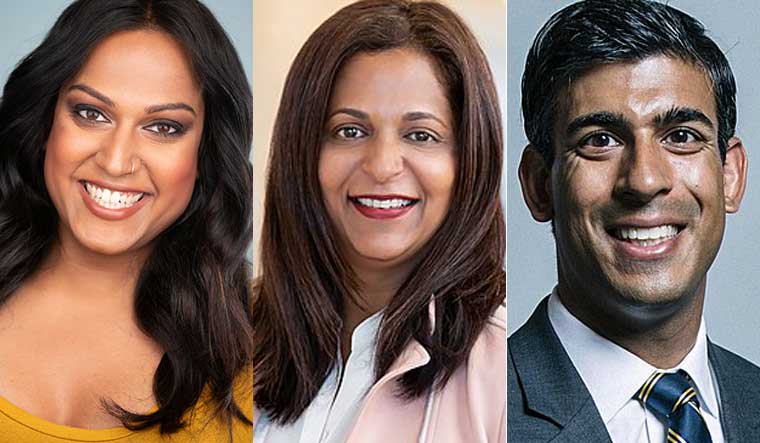 American apparel retailer Gap Inc. appointed Indian-American Sonia Syngal to be its new CEO. Syngal will be taking over from Robert Fisher, the son of Gap’s founders who has served as interim CEO as the company looked for a permanent replacement. India-born Syngal, who moved to Canada and later to the US with her family when she was a child got a bachelor's degree in mechanical engineering from Kettering University in 1993 and a master's in manufacturing systems engineering from Stanford University in 1995.

The mother two is also the highest-ranking Indian American female CEO of a Fortune 500 country. She took the mantle from Indira Nooyi, former CEO of Pepsi Co. after she stepped down in 2018.

Syngal is not the only global Indian who has grabbed headlines recently. Here are others of Indian-origin who made the news.

Rishi Sunak: Indian origin UK politician Rishi Sunak was appointed Finance Minister in February. Oxford-educated Rishi Sunak was a career investment banker before he gave it up to enter public service. He was elected to become MP for Richmond (Yorks) in 2015. Sunak, who replaced Sajid Javid, is also the son-in-law of Infosys co-founder Narayan Murthy.

Lisa Nandy: Lisa Nandy is an Indian origin MP who progressed to the second round of the Labour Party's leadership race in January this year as the party was looking to replace Jeremy Corbyn, who announced that he is stepping down after Labour's disastrous performance in the British elections in December 2019. Nandy, who was born in Manchester to an Indian father and British mother still remains a strong contender to be elected head of the Labour party. After studying politics at Newcastle University, she worked for for the Children's Society— a charity focused on helping vulnerable young people.

Dr Sethuraman Panchanathan: Indian-American computer scientist Dr Sethuraman Panchanathan was chosen by US President Donald Trump to lead the prestigious National Science Foundation in December 2019. Panchanathan, 58, has taken over from France Cordova when her six-year term as the NSF Director ended in 2020. Panchanathan who studied in Chennai has had some prestigious posts to his name. He was appointed to the National Science Board (NSB) in 2014; he also served as the Chair of the Committee on Strategy for the NSB and served as a member of the National Advisory Council on Innovation and Entrepreneurship.

Aneesh Sheth: Aneesh Sheth is definitely not the first actor of Indian origin to make waves in Hollywood. But, she definitely is the first transwoman of Indian origin to do so. Adopted by an Indian couple in New York, Aneesh's first prominent recurring role has been in season 3 of Marvel's Jessica Jones, where she plays the alcoholic private investigator's sassy assistant. The feisty Aneesh recently appeared in a television mini-series Insomnia and will soon be seen in a comedy series First One In.

Here are some others of Indian-origin who made global news

Indian born Priya Serrao won the Miss Universe Australia title for 2019. The law graduate edged past 26 other women to win the title.

November 2019 also saw four Indian-Americans win local and state elections in the US. Indian-American Ghazala Hashmi, a former community college professor, became the first Muslim woman to be elected to the Virginia State Senate. Suhas Subramanyam, who was formerly technology policy advisor to former president Barack Obama, got elected to the Virginia State House of Representative.

In Britain's general elections in 2019, Indian-origin candidates across both the Conservative and Labour parties on Friday registered strong results in the UK's general election, with around a dozen MPs retaining their seats alongside some new faces.

All the Indian-origin MPs from the previous Parliament were successful in clinching their seats, with Gagan Mohindra and Claire Coutinho for the Conservative Party and Navendru Mishra for Labour among the first-timers. In the conservative party, Priti Patel saw a comfortable win, Alok Sharma, the former international development minister won from Reading West, Shailesh Vara won his North West Cambridgeshire seat and Goan-origin Suella Braverman clinched Fareham.