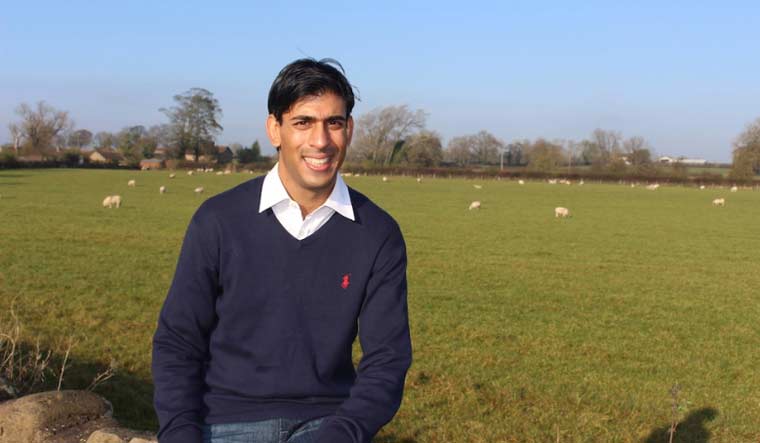 UK's new finance minister Rishi Sunak was by Boris Johnson's side as the Prime Minister chaired his first meeting at 10 Downing Street in London on Friday after a major reshuffle that has thrown up the most Indian-looking Cabinet in Britain's history. Priti Patel, who held on to her job as Home Secretary, had made history as the senior-most Indian-origin Cabinet minister to be appointed by Johnson in July last year. That tally has now changed with not one but two of the senior-most posts in the Cabinet occupied by Indian-origin politicians.

Indian-origin candidates across both the Conservative and Labour parties had registered strong results in the UK's general election, with around a dozen MPs retaining their seats alongside some new faces. All the Indian-origin MPs from the previous Parliament were successful in clinching their seats, with Gagan Mohindra and Claire Coutinho for the Conservative Party and Navendru Mishra for Labour among the first-timers.

Besides the 39-year-old Sunak occupying the second-highest political office, and Gujarati-origin Patel in charge of the Home Office, India-born Alok Sharma takes charge as business minister, and Goan-origin Suella Braverman becomes the government's lawyer in chief as the new Attorney General. "Great to speak to HM Treasury [UK Treasury Department] this morning about our shared mission  to unite and level up the country. Now down to work," said Sunak, just before attending his maiden cabinet meeting as Chancellor of the Exchequer.

Sunak, the son-in-law of Infosys co-founder Narayana Murthy, will not only be Johnson's next-door neighbour at No. 11 Downing Street but also be seen by his side as a regular double-act as the UK Prime Minister brought the economic advisers usually split across No. 10 and 11 Downing under the prime ministerial purview. In what has been dubbed a "power grab" by some experts, this was the main reason behind Sunak's predecessor Pakistan-origin Sajid Javid, the first British Asian to hold the post, announcing his shock resignation as Chancellor.

Suella Braverman, a staunch Brexiteer who has been critical of judges' decisions on legislation related to the UK's exit from the European Union (EU), has been brought in as Attorney General to initiate judicial reforms that the UK Prime Minister is keen to put in place. Braverman, born Suella Fernandes, is only the second female to occupy the important office and is on record as being critical of the judiciary exercising too much power over politics. The Cambridge University graduate, who has practised as a barrister in the English courts for many years, is expected to trigger a new balance between the legislative and judiciary.

Who is Rishi Sunak?

Son of British health service worker, Oxford educated Rishi Sunak inherited public service from his parents and rose to become UK's first Indian origin finance minister, replacing Pakistani-origin Sajid Javid. Son-in-law of Infosys' co-founder Narayana Murthy, Sunak was a career investment banker before dedicating his life to public service by entering politics by becoming a MP first time in 2015. He has been an elected representative of the UK Parliament for three times, beginning May 7, 2015.

"I was first elected as MP for Richmond (Yorks) in 2015 and re-elected to represent this area in June 2017 and December 2019. I was previously Parliamentary Under Secretary of State at the Ministry of Housing, Communities and Local Government. I was appointed Chief Secretary to the Treasury in July 2019," reads Sunak's Facebook profile.

The UK-born son of a pharmacist mother and a National Health Service (NHS) general practitioner father is married to Murthy's daughter Akshata Murthy, with whom he met in California and stayed there before moving back to London. Until now, Sunak was Javid's junior as the Chief Secretary to the Treasury and was seen as a rising star within the Cabinet. Sunak, who also holds a MBA degree from Stanford University, co-founded a 1-billion-pound global investment firm and specialised in investing in small British businesses.

"Excited to launch a Freeports consultation. As a proud, independent, outward-looking country we champion global free trade. Freeports will help to attract new businesses, create jobs and spread opportunity," he said in a tweet posted earlier this week.

In his bio on his website rishisunak.com, Sunak writes that he grew up watching his parents serve the local community with dedication. "My dad was an NHS family GP and my mum ran her own local chemist shop. I wanted to make that same positive difference to people as their Member of Parliament and I was first elected to represent this wonderful constituency in 2015 and re-elected in 2017," reads his profile.

The three-time elected member of the UK Parliament is also a fitness enthusiast and enjoys playing cricket, football, besides watching movies in his free time. The former banker also co-founded a large investment firm, working with companies from Silicon Valley to Bangalore and used that experience to help small and entrepreneurial British companies grow successfully.

Congress MP Shashi Tharoor and Biocon founder Kiran Mazumdar Shaw took to micro-blogging site Twitter to congratulate Sunak. "Warmest congratulations on your appointment as Chancellor of the Exchequer. What splendid news - All Indians could not be prouder! Best wishes in your challenging new responsibilities!," Tharoor tweeted. Shaw said, "Rishi Sunak, Son-In-Law Of Narayana Murthy, Appointed UK Finance Minister - so proud to hear of this exalted appointment @RishiSunak Huge Congratulations from all of us".