Gotabaya built his campaign on the failures of the incumbent administration 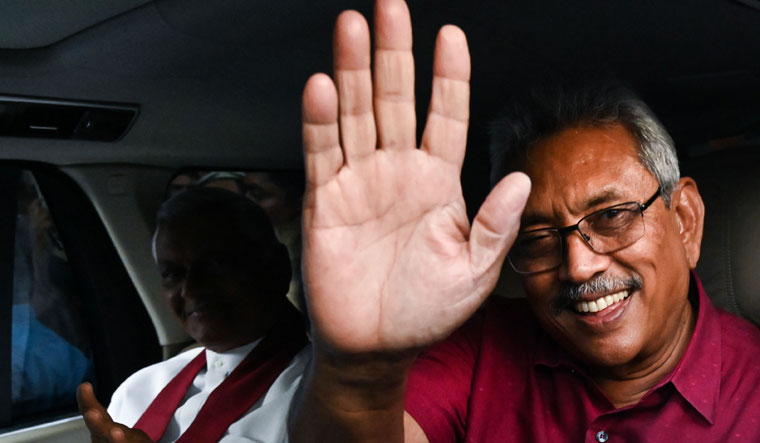 Gotabaya will likely be sworn into office as the President on November 20. While his return has brought cheers among the Sinhalese-majority who voted for him, the Tamil and Muslim minorities in the North and the East are not in a mood to celebrate his victory.

“As we usher in a new journey for Sri Lanka, let us rejoice peacefully with dignity and discipline in the same manner in which we campaigned,” Gotabaya tweeted, a few hours after his Sri Lanka Podujana Peramuna (SLPP) claimed victory in the presidential elections.

Gotabaya Rajapaksa, a former army general who served as the Defence secretary of the country during his brother Mahinda Rajapaksa’s regime, played his cards on what his supporters say were the major issues plaguing the island nation: Terror, an unprepared internal security setup, and unaddressed economic problems.

He played on the fears stoked by the people of the country after the deadly Easter Sunday bomb attacks in parts of Colombo and East Sri Lanka and said his government will address the security issue. With an aggressive campaign, he was nicknamed “Terminator” by his family members and SLPP cadres. His campaign focused on the security issue, capitalizing on the intelligence failure that led to the Easter Sunday attacks. The next big issue was economic development, with Gotabaya promising a significant reforms agenda in the country.

“It is very clear that he has been voted to power only because of his promises. It is a very decisive victory. As promised his actions would be on protecting the security of the nation and the region, economic development of the country, reforms agenda which includes policy regulations. For this I believe he will engage with the policy professionals in the country,” Charitha Herath, senior lecturer at the University of Peradeniya and former secretary of mass media and information, told THE WEEK.

Gotabaya, 70, rode on the failures of the incumbent Sirisena-Ranil Wickremesinghe government, whose failure to prevent the Easter Sunday bombings, or address the fallen economy and rising debt, led to an anti-incumbency wave that has now brought the Rajapaksas back to power.

The Rajapaksa regime during 2005 and 2009, though criticized for the brutal killings in the war fields in Northern Sri Lanka, was celebrated by the majority Sinhalese for its tightly-controlled and centralized power. Mahinda was also known for bringing in infrastructure projects, though it was largely dependent on China. In the past five years under Maithripala Sirisena and Ranil Wickremesinghe, the country’s debts grew drastically.

“Yes. Our debts have grown. The country’s economic issues will be addressed by Gotabaya,” says Herath. According to Herath, a staunch supporter of Gotabaya and his team, Gotabaya is not just the President of the Sinhala majority who voted for him, but of the whole of the country, including the Tamils and the Muslims.

Clarifying on Gotabaya’s setback in the North and the East, Herath said, “We are sad that the northern politicians acted against our party. We are not the enemies of the minorities. Earlier our Mahinda government was engaging in the development of that region immediately after the war. After the regime change in 2015, the UNP government promised to reform the constitution. But they did not do anything to the people of the Jaffna peninsula. But not our position is that we will engage with the people of north and east. We are not extremist we want to look at the real aspirations of the people of this region also.”

Apart from engaging himself in the North and the East, Gotabaya also looks forward to improving his country’s relationship with India.

Prime Minister Narendra Modi tweeted his congratulations to Gotabaya shortly after his victory, saying, “I look forward to working closely with you for deepening the close and fraternal ties between our two countries and citizens, and for peace, prosperity as well as security in our region.”

Congratulating his brother and the party for the victory, former President Mahinda Rajapaksa said, “We will be initiating a programme of action to deliver justice to all those who have been subject to persecution and harassment by this government over the past five years. I salute the people of Sri Lanka for decisively defeating the 2015 style attempt made to once again purloin the mandate of the people through backroom deals with various chauvinistic ethnic and religious groupings organized around narrow political agendas. The time has now come to put an end to this dangerous game of promoting religious and ethnic chauvinism for political purposes.”