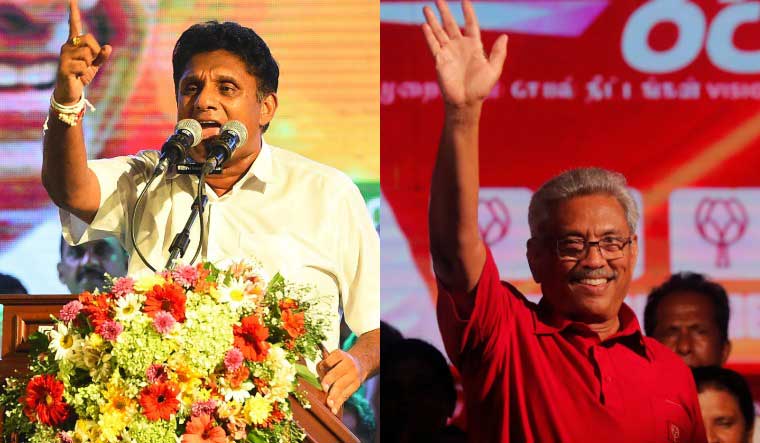 Seven months after the deadly Easter Sunday blasts and after 18 months of political instability and infighting, Sri Lanka will vote on Saturday to elect its new president. The presidential election will be a decisive moment for the future of the island nation, and, this time, the scene is entirely different from what it saw in 2015.

Maithripala Sirisena—who in 2015 rode to power with the strong anger and anti-incumbency against the Rajapaksa clan—is not in the fray. A crucial election with 35 candidates in the fray, the fight is primarily between Gotabaya Rajapaksa, candidate for the Sinhalese-Buddhist nationalist SLPP and Sajith Premadasa, deputy leader of the ruling United National party (UNP).

The third significant player is Anura Kumara Dissanayake from the Janata Vimukthi Peramuna (JVP). While both Gotabaya—popularly known as Gota—and Sajith come from powerful political families, Dissanayake is expected to play a spoilsport in certain pockets. However, Gotabaya and Sajith are looked at as the key candidates, who have strong support across the nation. While Gotabaya enjoys massive support among the Sinhala majority in the south, the Muslim and the Tamil minorities in the east and north are rooting for Sajith.

One of seven brothers of the Rajapaksa clan, who have been popular among the majority Sinhalese for more than a decade, Gotabaya is credited with ending the three-decade-long bloody civil war against the LTTE. Though called a “man of discipline" by his party colleagues and common Sinhalese, Gotabaya is looked at as a war criminal who committed many human rights atrocities in the north during the war as he was the de facto head of the military in the Mahinda Rajapaksa regime. And of course, Gotabaya still faces multiple lawsuits relating to torture, fraud and corruption. He also saw the issues of renouncing his dual citizenship, which did not go down well with the people.

His close contestant is Sajith Premadasa, the son of Ranasinghe Premadasa, the Sri Lankan president who was assassinated in 1993. The deputy chairman of the ruling United National Party (UNP) is fielded by New Democratic Front (NDF). Sajith is credited to be a very disciplined, soft-spoken politician and the son of a leader who pulled Sri Lankans out of poverty with progressive policies.

Sajith is looked at as a man of the people, much away from the group of political elites in Sri Lanka. He enjoys support in the north and east where the Rajapaksas are still blamed for war crimes.

While Gotabaya has positioned him as the authoritarian strongman who can wipe out terrorism in any form, his campaign largely focused on the fears that lingered after the deadly Easter Sunday blasts. And his manifesto released on October 25 focuses on national security. It also discusses in detail about restoring stability in the country, pointing to the intelligence failure that led to the April 21 Easter Sunday attacks. Gotabaya's manifesto also promises plans to work with India for regional security and engage with the SAARC and BIMSTEC groupings.

Sajith Premadasa enjoys the support of the two prominent Muslim parties—Sri Lanka Muslim Congress and All Ceylon Makkal Congress. The Tamil Progressive Alliance formed by Tamils of Indian origin and the Jathika Hela Urumaya has been giving a tough fight to Gotabaya. Former president Chandrika Kumaratunge and her faction within the Sri Lanka Freedom Party (SLFP) has also pledged its support to Sajith.

Sajith's manifesto says he would deliver on the promises and seems to have learned much from the failures of the Sirisena government. His manifesto pledges a new constitution, independent judiciary, an independent public prosecutor, creation of a upper house comprising provincial council representatives and meaningful devolution of powers to provinces.

But Sajith could face a setback from the Tamil votes in the north. Though Gotabaya is very hated for his alleged war crimes, the Tamil National Alliance (TNA) could turn a burden for Sajith close to polls. The TNA, which was part of the Sirisena government, representing the Tamil minorities, seems to have lost credibility as Sirisena and Ranil Wickremesinghe did not deliver on their promises to the Tamils.

With the battle lines drawn sharply, the election results will be out on Monday and Sri Lanka would see its new president soon.