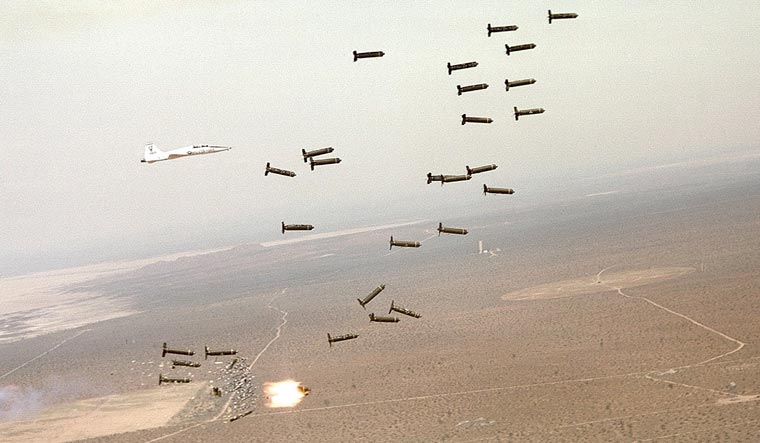 Representational image of a test of cluster bombs by the US Air Force; notice the munitions at the bottom breaking up into smaller submunitions | USAF

The Pakistani military on Saturday alleged that the Indian Army had used cluster munitions along the Line of Control in Kashmir to “deliberately” target the civilian population.

Cluster munitions are air- or ground-launched weapons that when fired open mid-air to release several 'submunitions', small explosives that can saturate a large area, threatening people and light vehicles in the vicinity. In addition to exploding like bombs, some unexploded cluster munitions act like landmines.

Given their higher risk to civilians, several countries, notably in Europe, have stopped producing cluster munitions; India and Pakistan still produce these weapons. In 2008, the UN adopted the Convention on Cluster Munitions (CCM) that prohibits all use, stockpiling, production and transfer of cluster munitions.

The Inter-Services Public Relations, the media wing of the Pakistani military, on Saturday issued a press statement alleging the use of cluster munitions by India. The ISPR statement claimed that the Indian Army, on the night of July 30-31, “targeted innocent citizens including women and children in Neelum Valley through artillery using cluster ammunition”. The ISPR claimed 11 people were critically injured while two civilians, including a four-year-old boy, were killed.

The ISPR claimed the purported use of cluster munitions by India was in “violation of Geneva Convention and international humanitarian law”. The ISPR press release referred to the Convention on Cluster Munitions and declared the act as “blatant Indian aggression”.

The allegations by Pakistan come amid continuing firing in recent days between the two sides across the LoC, which has included the use of artillery.