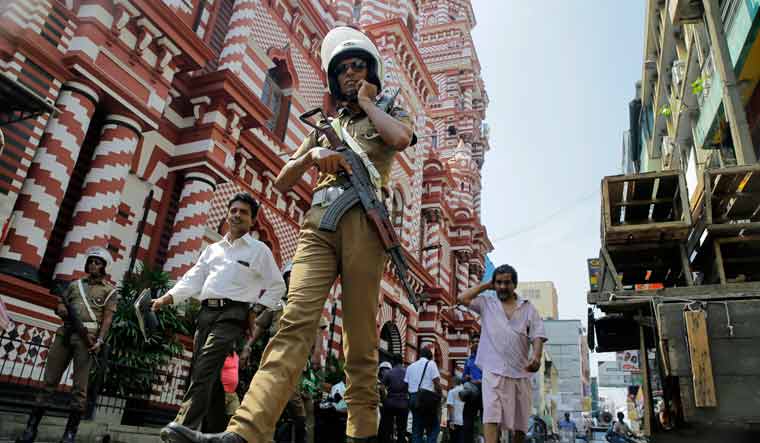 A Sri Lankan police officer patrols out side a mosque in Colombo, Sri Lanka; the Islamic State group has claimed responsibility for the Sri Lanka attacks on Easter Sunday | AP

Sri Lanka remained on high alert as police on Wednesday carried out a controlled explosion of a suspicious motorcycle parked near a cinema hall here.

The police said that the area near the Savoy Cinema at Wellawatta, South Colombo was cleared and the controlled explosion was carried out by the bomb disposal squad to check the motorcycle which had no owner.

No explosives were found in the vehicle.

Sri Lankan police have asked all motorists and motor cyclists to leave their contact numbers in their vehicles when they leave them parked in the city.

Security forces have launched nationwide search operations to nab the perpetrators of the Easter Sunday bomb attacks that claimed more than 350 lives. Several people have been arrested in connection with the attacks.

The Islamic State terror group has claimed responsibility for the devastating blasts when seven suicide bombers carried out the series of blasts that tore through churches and luxury hotels in Sri Lanka on Easter Sunday, in the country's worst terror attack.