On Friday, Cilic will take on No. 8 Casper Ruud for a spot in the final 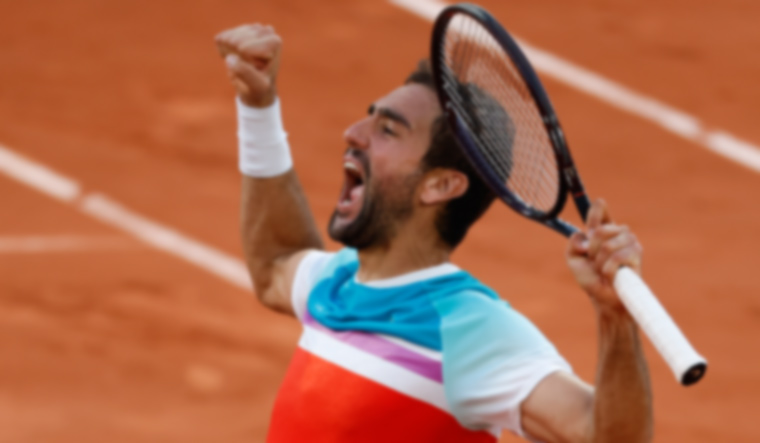 Marin Cilic is 33, nearly eight seasons past his one Grand Slam title at the 2014 U.S. Open and, more than four full years removed from his most recent trip to the semifinals of a major tournament.

If he keeps serving like this, there's no reason to think about quitting tennis anytime soon.

Andrey played incredibly well. One had to go down, the 20th-seeded Cilic said, "and today was my day.

The Croatian is the fifth active man to complete a full set of at least one semifinal run at all four Slam events, joining Rafael Nadal, Novak Djokovic, Roger Federer and Andy Murray, each of whom has been ranked No. 1 and won multiple majors.

Cilic was the runner-up to Federer at Wimbledon in 2017 and the Australian Open in 2018; the latter had been Cilic's most recent trip to a Slam semifinal.

On Friday, Cilic will take on No. 8 Casper Ruud for a spot in the final. The other men's semifinal is 13-time French Open champion Rafael Nadal, who eliminated Novak Djokovic in the quarterfinals, against No. 3 Alexander Zverev.

Their match got a bit testy, with Ruud telling Rune he didn't appreciate him questioning an obvious officiating call.

I told him, What, do you need to check every mark?' and he told me to be quiet. I asked him, Maybe that's not the greatest thing to tell your opponent to be quiet when I'm talking to you?' And he said it once more. So that was all that happened. And I didn't exchange any more words with him after this, Ruud said.

So that's what he wants to say and behave? That's up to him.

Obviously disappointed that I couldn't do better today. But still I have to look at the two weeks it was great, Rune said.

I mean, I played some good matches. A lot of positives to take.

Cilic might be a decade older than his next opponent, but he feels good these days.

Continued Cilic: Don't tell my wife I'm saying this, (but) I might be playing another 10 years.

All kidding aside, he said: How long? We'll see. But definitely three, four years, if I can be competitive like this.

He dropped Rublev's career mark in major quarterfinals to 0-5. That was thanks in part to Cilic's overwhelming ability to strike serves and groundstrokes for winners 88 in all, more than twice as many as Rublev's total of 35.

It was hard emotionally, because he played some games very well, Cilic said.

When you play this long, there's always be some ups and down, so I had to keep my focus.

Rublev twice displayed good sportsmanship, indicating early in the tiebreaker that one of Cilic's strokes was indeed in and, earlier at 1-all in the fifth set, volunteering to replay a point after Cilic complained that a shot that was called out had touched a line.

As part of an agreement among the four Grand Slam hosts to standardize one element of the sport, this is the first time the French Open has used a tiebreaker in fifth sets of men's matches and third sets of women's matches.

Cilic ran away with the first-to-10 format against Rublev, collecting the match's last nine points after trailing 2-1 in the tiebreaker.

He came up with three aces in the tiebreaker.

Almost all the important points he was winning with his serve, Rublev said, and was really, really tough to read or to return.