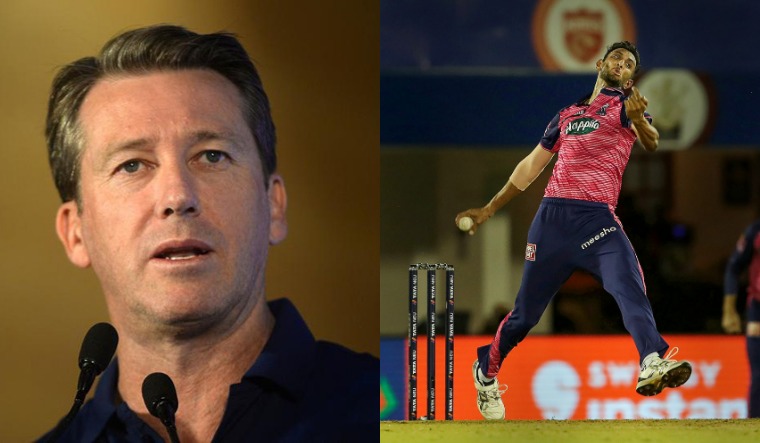 Australian pace legend Glenn McGrath on Friday said the way fast-rising Prasidh Krishna bowled a penultimate over in an IPL game showed he could handle pressure.

McGrath also expects India pacer Jasprit Bumrah, who is having a low-key IPL for Mumbai Indians and has taken only four wickets so far, to bounce back strongly.

“Two of our guys, Avesh Khan and Prasidh Krishna, the way they are coming through. To see Prasidh bowl a fantastic penultimate over against Delhi Capitals in IPL on Friday just shows that these guys can handle pressure,” McGrath, who is director of coaching at the famed MRF Pace Foundation in Chennai, told reporters.

Heaping praise on Prasidh, who has trained at the MRF Pace Foundation, McGrath said, “I have always liked Prasidh's attitude. He is always keen to bowl in the nets. He is getting results in the middle for the hard work he puts in during training, which shows his quality. He is mentally strong and has a good attitude. He is bowling well at the moment. He is high on confidence.”

Asked about Bumrah not being his usual wicket-taking self during the IPL in which his team Mumbai Indians have lost all their seven games so far, McGrath said since “he has enjoyed so much success early in his career, he is expected to maintain that level”.

“I think, batsmen are a lot more watchful against him these days. But as a bowler, you want to take wickets, so it's more of a mental game now. He is a quality bowler and very intelligent. I expect him to bounce back strongly.”

McGrath, who picked up 563 wickets from 124 Tests and 381 scalps from 250 ODIs, said it was good to see quality pace bowlers emerging in India.

“Always been good batting conditions and bowling conditions for spinners here. But what I have heard is that the pitches are a little different now and there is more in it for the pacers now, which I think is great... you see that India line-up for quite some years now have a quality fast bowling attack. When you have a strong bowling line-up in your national team, it filters down with more people wanting to become fast bowlers as well,” said the pace legend, who has been with the Pace Foundation for 10 years now.

“But it is one thing that the national team has pacers, but you also need to see who are the guys coming in next. Australia has had the same issue (with Pat Cummins, Mitchell Starc and Josh Hazlewood doing the bulk of pace bowling) until you had (Scott) Boland in the Ashes. You need good depth in your fast bowling,” he added.

About young pacer Umran Malik, who has made heads turn with his sheer pace and performances in the ongoing IPL, he said, “I think pace is important, but it's not everything. You don't want someone bowling 150kph and spraying it down the leg side or spraying it wide, so you have got to have that control. But if you have a bowler bowling at that pace, you would want to have longevity. I am sure the selectors will be very interested in him and would love to have someone bowling at that pace for your country,” he added.

On pacer Cummins being handed the Australia Test captaincy, McGrath said, “There have been fast bowlers like Kapil Dev, Imran Khan, (Courtney) Walsh... [captaincy] was not something I thought they couldn't do. Fast bowlers are more intelligent than the batsman (laughs). I like the way Cummins and Steve Smith work together.”

On former teammate Shane Warne, who passed away recently, McGrath described him as larger than life and someone who positively impacted anyone who met him or spent time with him.