Messi, who is recovering from an injury, played only 15 minutes of the second half 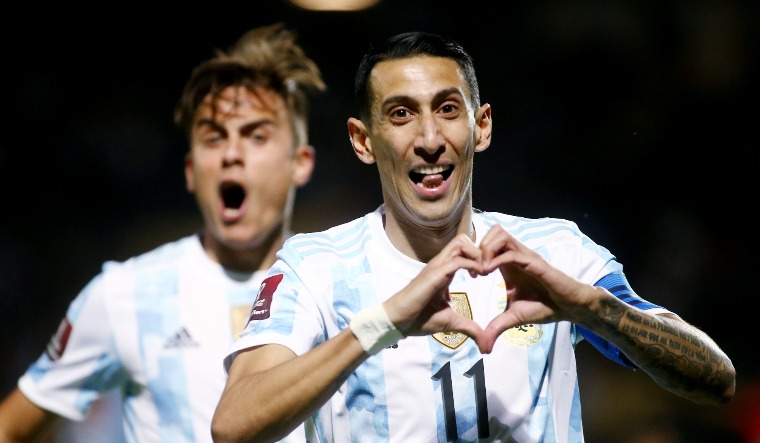 Argentina closed in on a direct World Cup spot with a 1-0 win at Uruguay, despite the absence of Lionel Messi for most of the match as he recovers from a left knee injury.

Veteran winger Angel di Maria scored the only goal in the seventh minute on Friday with a powerful left-foot shot from the right corner of the penalty box. Uruguay goalkeeper Fernando Muslera didn't get close to stopping the ball.

Second-place Argentina now has 28 points in 12 matches. The top four teams in South America earn direct entry to the World Cup. The fifth-place team goes into an intercontinental playoff for a spot in Qatar next year.

"Winning today was a gigantic step. We deserve this, we have worked for this," Argentina goalkeeper Emiliano Martinez said.

"They needed points, playing here was hard. This Argentina has amazing courage, and when we don't play well we have to win anyway."

Argentina was less dominant in Montevideo in comparison with recent qualifying matches. Messi only came on in the middle of the second half but did not make an impact. The absence of defensive midfielder Leandro Paredes, who has a hip injury, also affected the Copa America champions.

Uruguay's Luis Suarez hit the post after Argentina's goal and his team had the better opportunities in the second half, but it largely missed the target.

This week's round made Brazil, with 34 points, the first South American team to qualify for Qatar. Ecuador remains third with 20 points. Chile, Colombia and Uruguay follow with 16 points, two ahead of Peru. Paraguay and Bolivia have 12 points and Venezuela has seven.

Argentina's next match is against Brazil when they meet in San Juan, Argentina, on Tuesday. Their match in September was suspended after seven minutes of play because of concerns from authorities over breaches of COVID-19 protocols. FIFA has not yet decided whether it will be replayed.